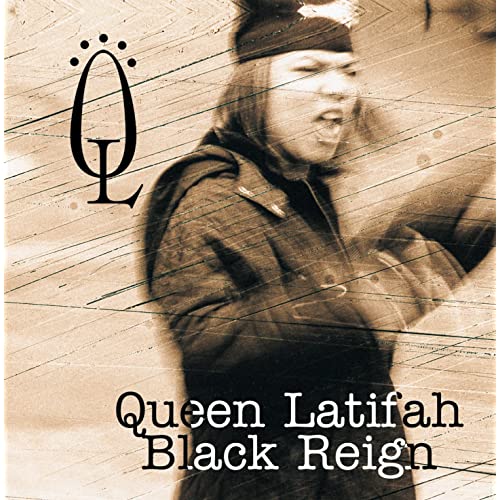 It’s easy to take for granted the number of powerful black women in hip-hop these days — Lizzo, Megan Thee Stallion, Sa-Roc, Nicki Minaj, Rapsody — the list goes on and on. There was a time not that long ago in my living memory where it was commonly held wisdom that rap fans didn’t want to listen to women rapping. There were all kinds of flimsy excuses to enforce this cultural attitude. “Their voices are too high pitched.” I guess you never listened to a DJ Quik or Eazy-E record then? “Females are supposed to be backup dancers, not the featured stars.” Funny how most of the dancing I remember in hip-hop videos back then was B-BOYS showing off their breaking skills. “Women just aren’t as hard as the men.” Now to address that LAST point specifically I would like Dana Owens to step to the mic.

In the 1980’s Queen Latifah was among a slew of women challenging these arrogant misconceptions — MC Lyte, Roxanne Shante, and Monie Love just to name a few. Despite the inroads these emcees made following in the footsteps of Sha-Rock in hearts and on Billboard charts, a large percentage of their male counterparts threw around the word “bitch” casually and acted like women were only good for one thing. Having already become well established with two successful solo albums on Tommy Boy Records, Latifah was well positioned on “Black Reign” to not only make her Motown debut but to put the misogyny of the rappers on the scene with her on blast. It’s not that “U.N.I.T.Y.” was a statement out of the blue — after all Latifah co-authored the smash hit “Ladies First” with Monie Love — but the smooth track produced by Kay Gee of Naughty By Nature set off her words lovely.

“One day I was walking down the block
I had my cutoff shorts on right cause it was crazy hot
I walked past these dudes when they passed me
One of ’em felt my booty, he was nasty
I turned around red, somebody was catching the wrath
Then the little one said ‘Yeah me bitch!’ and laughed
Since he was with his boys he tried to break fly
Huh, I punched him dead in his eye and said ‘Who you calling a bitch?'”

What stands out more in hindsight is how every verse of the song addresses a different form of disrespect. Sexual assault is obvious in the song’s opening, but then Latifah flips the script and talks about staying in an abusive relationship in the second verse. All the sad reasons you hear about that women stay are there — keeping the family together for the children, believing he can change for the better, feeling dependent on the abuser as the provider, and so on. The verse ends the same way it starts though with the protagonist declaring that it ends NOW. The third verse is the biggest surprise though as Latifah calls out women for disrespecting themselves by trying to be a “Gangsta Bitch.” It’s not a coincidence that Apache was a fellow member of the Flavor Unit crew out of New Jersey. Fam is fam but Latifah was not going to let young ladies “jump in front of the bullet” to prove they could live up to Apache’s standard (nor anyone else’s).

The title of “Black Reign” is in many ways prophetic. Dana Owens successfully transitioned herself from rapper to actress to business mogul as the decades went on, finding success in each endeavor all while maintaining the regal stature of a Queen. She asserts her place on the throne with tracks like the S.I.D. Reynolds produced “Just Another Day.” It’s a celebration of the area she comes from and the people who live there.

Every part of the neighborhood gets love, from the kids playing in the street to the brother with a bow tie selling bean pie. No matter what drama comes up to get in her way “me and my peoples around the way remain cool.” Both then and now it’s fair to say that there aren’t enough affirmational songs about being proud of where you’re from, no matter the reputation or the crime rate associated with it. Call it editorializing if you want but maybe if more people loved themselves and their neighborhood equally, warts and all, we’d have less negativity and black on black crime. A little love for each other goes a long way and “plain ol’ Dana” has a lot to share with her peeps.

Speaking of sharing the love “Rough” features a 1993 all-star list of hip-hop stars including Treach, Heavy D and KRS-One. Honestly the beat on the track is a little underwhelming and borders on monotonous, but the sheer joy of a posse track with this lineup overcomes those deficits. I actually prefer it to “Coochie Bang,” a sexual empowerment track with another cameo from Treach on the hook. “Kissing you don’t mean sticking you” warns Latifah, making it clear that there will only be intercourse on HER terms. I’m all about Latifah laying down the law, but the attempt at a catchy sing-along chorus actually backfires and brings the presentation down.

It’s a curious twist of fate that Latifah had established herself so well as the woman who takes no shit from the fellas that many of her fans were very unprepared to hear her CROON on singles like “Weekend Love.” I even remember hearing people say that she had crossed over or sold out by making such blatant overtures to R&B and the club, although in retrospect it feels more like a reggae crossover track thanks to the patois chattah courtesy of Tony Rebel. I’d still rather hear Dana Owens rap than sing but I’d also rather hear this song ten times than “Coochie Bang” even once.

“Black Reign” is a good album. It’s also a troubled album. Through no fault of her own Dana’s older brother Lancelot (a/k/a “Winki”) died in a traffic accident while riding the motorcycle she had purchased for him. The closing track is a heartfelt dedication to him as he’s “looking down from heaven” on her, and the burden of the guilt she felt over his death led to what she described in own autobiography as a long period of depression and self-medication. She put up a brave front on this album but the hurt comes through in both expected and unexpected ways.

The album careens from one sound to another and at times seems to not be sure what it wants to achieve. “No Work” is a hard hitting anthem for the Flavor Unit crew, while “Mood Is Right” is a quiet storm rap to finding a lover she can get with spiritually as well as physically. “All I ever wanted was a strong brother like you.” Again the sentiment is 100 on point but the tone of the tracks sends mixed messages. She wants to keep the hardcore appeal she got by proving women in hip-hop aren’t just eye candy but rough and rugged like the men, but she also wants to show a soften more tender side at the same time. It’s a testament to Queen Latifah that she CAN have it both ways, but I have to be fair and say that not every track works. Enough of them do that I still recommend “Black Reign” to you, especially as an album from an era where women were fighting to be equals in rap music.