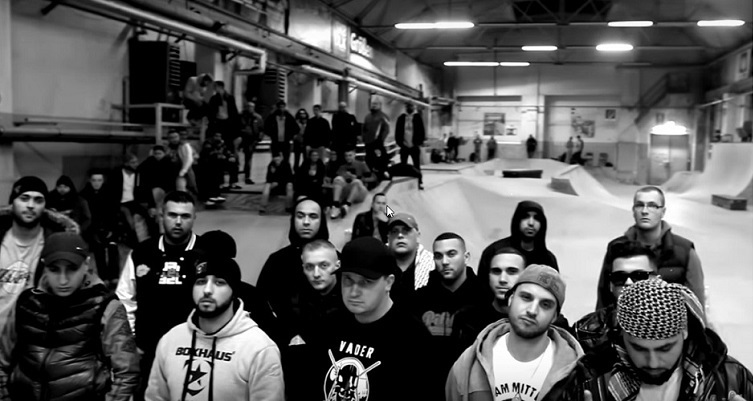 Multicultural MC’ing Made in Germany

We are living in a time when the idea of diversity is rejected by some while others insist on it almost too much. The concept of ‘identity’ is weaponized both by racists and those intending to fight racism. The artform of rap would be the last platform to pretend that everything is okay, even though it is prone to distortion in various directions. But there’s a certain sense of realism to rap that prevents it from indulging too much in ideologies. Rap is just simply more practice than theory.

With this in mind I present to you a peculiarity of German rap music. The posse cut/all-star track that just so happens to highlight the considerable cultural diversity of commercial and underground rap made in Germany.

Don’t be mistaken, these are not happy get-togethers embracing each other’s differences. The mood is frequently hostile (sadistic even), the attitude macho (misogynistic even), and every man is scrambling to assert his superiority. In terms of content, more than a few lyrics on these songs are problematic.

But color of skin is just not a factor. Sure, it can play a role for individual statements or songs or the persona as a whole and their music. But it’s other things that brought them on these tracks (apart from the right connections) – rhymes, flows and mindstates. And so these lineups are a distant reminder of Rakim‘s timeless aphorism “It ain’t where you from, it’s where you at”.

A significant number of German rap representatives are first or second generation immigrants from countries such as Turkey, Iran, Afghanistan, Ukraine, Congo, Uganda, Eritrea, Morocco or Algeria. There are Kurds from Iran, Iraq, Turkey and Lebanon. The biggest contemporary rap star in Germany hails from Russia by way of Ukraine. There is a Sri Lankan Tamil who’s had three consecutive number one albums between 2014 and 2017. The phenomenon itself is nothing new. The 1990s witnessed multi-ethnic crews such as Advanced Chemistry, Fresh Familee, T.C.A Microphone Mafia, Easy Business, Ruhrpott AG or Cribb 199.

The historically most important track to unite German MC’s was 2001’s “Adriano (Letzte Warnung)”, which protested the murder of a black man by neo-Nazis, the collaboration therefore explicitly emphasizing the color of skin of its participants. (We’ll cover the project in a separate article/review.) Twenty years later German rappers once again gathered on the tragic occasion of a hate crime after a right-wing extremist fatally shot nine people in the city of Hanau on February 19th 2020. Resident rapper Azzi Memo organized a charity record called “Bist Du Wach?” with 18 guests.

Without wanting to go into detail about each song, the twelve clips below have a combined 136 million views on YouTube. Essentially revenants of countless underground cyphers, they feature massively successful next to highly obscure MC’s. Whether they get by with skills or with swag (or brute force), they boldly explore the world of language and recital, which is what rap requires them to do, but in the case of those with a non-native cultural background it’s also something that reflects the story of their life and that of their family. This being rap, everybody here follows certain customs. Viewers are greeted by countless middle fingers and other obscene gestures, as well as the pointing, cocking and firing of a hundred imaginary guns. But the lyrics and the fact that these artists find common ground on the same track tell another story.

One track is a portrait of self-described ‘kings without a crown’, another tries to explain why its stars have chosen to be rappers, another one appoints all attendants to find ‘parallels’, not so much in search of commonalities but to point out the contradictions of life. Visuals pay tribute to the classic “Flava in Ya Ear” remix or are inspired by modern street video formats and live streams. Beats range from boom bap to trap. What more could you want?

I understand that no one who comes across this post will sit through more than two hours of in-your-face Deutschrap, but just about any sample will prove my point about the scene’s multicultural make-up. Those who see the world in black and white and therefore may have a preconceived notion of what a German rapper should look like (black, not white or anything else, or white, not black or anything else) should know that no one here is a ‘guest’ in German hip-hop, they all are German hip-hop. Along with anybody else who decides to partake in it.

Finally, we cannot ignore the fact that the eloquence displayed by these rappers, especially those of fully foreign parentage, is something the greater public almost never bothers to acknowledge. (Nor misguided rap snobs, for that matter.) Instead these artists face the same old stereotyping and scapegoating that marks them as second-class citizens. I know, they sometimes say stupid things and do stupid things (not all of them, obviously), but that should not detract from the overall picture of rap and hip-hop made in Germany, which is indeed made by a highly diverse population driven by the same creative impulses, as different as their inspirations may be.