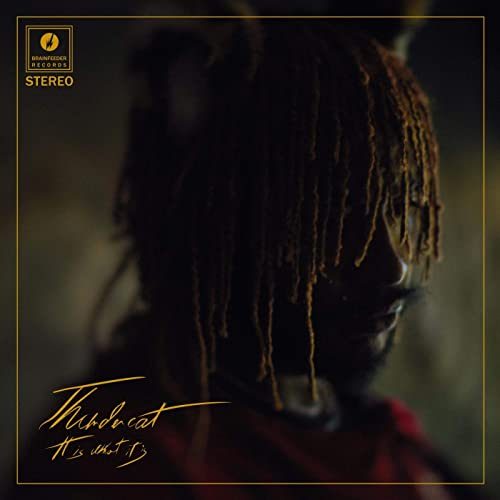 It Is What It Is

Thundercat :: It Is What It Is

“All I wanted was a Pepsi.” Those words were first and best known to me in the outro of Cypress Hill’s breakthrough single “How I Could Just Kill a Man.” Only later did I learn that the origin of that phrase was the Suicidal Tendencies song “Institutionalized,” a song that (much like hip-hop) was far too edgy for the commercial driven FM radio stations available to me growing up. For a band alternately described as both “thrash metal” and “punk rock” it’s a pretty hip-hop track. Lead vocalist Mike Muir speaks in run-on sentences about the increasingly unhinged conflicts he gets into with authority figures, with the single act of his mom not giving him a Pepsi illustrating how everybody unintentionally pushes his buttons.

How does all of this relate to Thundercat’s new album “It Is What It Is” though? I’m glad you asked dear reader. After first stumbling onto this proto-rap song thanks to Cypress Hill, I learned of the revolving door lineup of Suicidal Tendencies over the years, leaving Muir as the only original member of the band from its inception to the present day. Stephen “Thundercat” Bruner was one of those people, having a fairly long tenure as the group’s bassist from 2002-2011. You could actually argue it extended as far as 2013 since “13” was released with his musical contributions two years after he departed. Since that time Thundercat has evolved into a funk jam musician with a falsetto singing voice. His work is reminiscent of Frank Ocean, The Internet and Flying Lotus among others, and it’s pretty dope.

It’s not a coincidence that all of the artists I just named are known for their ties to Los Angeles and for being a little bit eccentric. Oh hell let’s just call it what it is — they’re weirdos. I dig that because I’m a weirdo. Even though a lot of the things I’m into have been gradually mainstreamed into pop culture, there was a long period of time where being into anime and video games made you an outsider in most circles, and probably still does if you live in any place that’s not urban and/or multi-cultural. Thundercat’s name references one of my touchstones as a child of the 1980’s — a cartoon series my parents loathed as being “nothing more than a commercial for the toys” I so desperately wanted (and never got). For years Bruner walked the fine line between being mainstream and outsider with Suicidal Tendencies, and he invites Lil B and Ty Dolla $ign to walk that line too on “Fair Chance.”

I can’t tell you Thundercat is a rapper, but when Tory Lanez sings all the time, I can’t tell you he’s one either. What I can tell you is that I enjoy funky, soulful, quirky jams. Short songs like “Existential Dread” sound like a mixture of contemporary AM radio and D’Angelo, and the fact it’s only 52 seconds long just makes me ache for more. A lot of Bruner’s tracks are like that. The energetic whirlwind “How Sway” is only 75 seconds, and it’s Thundercat showing off just how nimble his fingers are slapping that bass. “Girl you’re so fly, you really blow my mind” croons Bruner on “Overseas”, and while we’re all staying home in 2020, the breezy track at least lets you vacation in your mind with the girl of Thundercat’s dreams.

“It Is What It Is” is an album that doesn’t take itself or its protagonist too seriously, but thanks to a collaboration between Flying Lotus and Bruner putting it together, it’s seriously good. If you like George Clinton, Isaac Hayes, Jamiroquai, Phonte, Prince or any combination of those artists you would enjoy Bruner’s work here. It’s not revolutionary in breaking new ground you’ve never heard before from any of them, but it is evolutionary in that there’s a clear strain of outsider culture that’s being brought inside and shamelessly put under a microscope. It might be weird to some people but I think you’ll enjoy it too.

Thundercat :: It Is What It Is
8Overall Score
Music8.5
Lyrics7