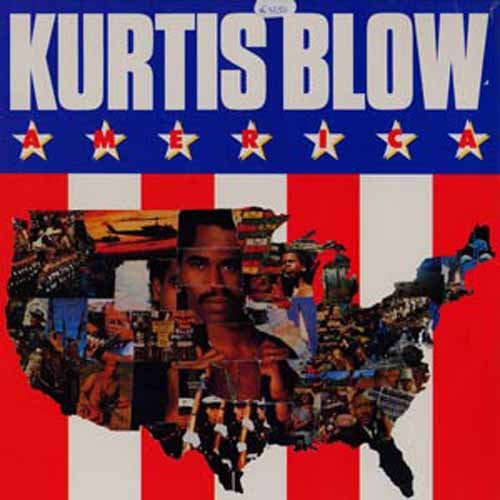 There was a point in my childhood where old school rappers, and by that I mean anybody who was a big star between 1979 and 1983, had fallen so far out of favor that their albums could be bought for pennies on the dollar. For me one such album was Kurtis Blow’s “America.” I scrounged his record out of a bargain bin at a secondhand store and slapped a dollar on the counter. The problem was I didn’t even OWN a turntable to play the record on at that age, and my parents had long since discarded theirs — even though I’d later discover they had a trunk full of vintage 7″ vinyl in the attic.

To listen to his album I had to actually borrow a favorite teacher’s stereo (my middle school band director) and dub it to cassette. I’m not sure why he’d let a punk kid mess with his equipment that way without supervision, but either he knew I was in a bind and really wanted to hear it, or he was just way too nice for his own good. Probably the latter. Either way I had no idea what to expect when I put the needle to the groove, because I only knew of Kurtis Blow by reputation as a hip-hop legend. I’m sure that what I DIDN’T expect was possibly the most over-the-top ass-kissing “God bless the USA” rap song in history. Sweet merciful Jeebus, this one takes the cake.

“From the mountain tops, to the rolling hills
Baseball, hot dogs, and all the cheap thrills
There’s New York, City, and Kalamazoo
White, black, red, yellow, and of course the Jew
Democracy, is the land of the free
But we’re all gonna die if there’s a WORLD WAR THREE!”

Let me back this train up for a second before I go wildly off the tracks. Kurtis Blow deserves a lot of credit for many things. He was the first rapper to sign with a major record label (Mercury) in 1979. He might have achieved his first fame for novelty songs like “Christmas Rappin’,” but “The Breaks” predates Grandmaster Flash and the Furious Five’s “The Message” as a popular rap song that wasn’t just about partying or having a good time. It’s a dance club hit to be sure, but the actual lyrics are about one hard luck “break” after another, something any listener could relate to. The song’s even a double entendre for catching “the breaks” as a deejay, which they did to get the “b-boys” (breakdancers) on the dance floor. These are things Kurtis Blow was very familiar with as a 1970’s kid at the dawn of hip-hop music and culture in the five boroughs of NYC.

“I’m talking ’bout the brother called AJ Scratch
There’s not a beat, ah that he can’t catch
He’s so def he doesn’t rehearse
And if you want to see me, ah then he comes first”

“AJ Meets Davy DMX” is more like what I expected on “America” — Kurtis Blow rapping about himself, hip-hop music and culture, and the people that he’s known “ever since seventy-eight.” Davy DMX was Kurtis Blow’s first deejay, but as he says on the song “Two deejays are better than one/now who’s the crew that gets the job done?/One’s from Hollis, and one’s from the Bronx/Funky fresh to give you what you want.” I love vintage rap songs where the emcee is bragging about how dope his deejay is, and Kurtis was so large (at least in his own mind) he needed TWO — DMX and AJ Scratch. This song is so fresh it almost makes up for how cornball the title track is. ALMOST. Sadly AJ is no longer with us, but his fans got an even more direct tribute from Blow they can reminisce to on the song “AJ Is Cool.”

Even with the obvious pandering of the titular track to help Kurtis Blow cross over to white people, “America” didn’t need any such help. All it needed was “If I Ruled the World,” which thanks to the movie Krush Groove gained a much wider audience for Blow anyway, causing the song to rise as high as No. 24 on the UK music charts. Nas would famously recycle the song’s name and have Lauryn Hill sing the hook for his own chart topping hit, although the instrumental he raps over is from Whodini’s “Friends.”

For reasons I can’t fathom Mercury Records has never reissued this album physically or digitally, but if you have a turntable to play it on you might still be able to find a copy. I think it’s actually worthy of a re-issue with full liner notes and remastered audio, but even now it’s hard to get over how BAD the title track is. “Don’t you love America? My favorite coun-tryyyy.” I understand his motives, but it’s so shameless that even a Trump loving, MAGA hat wearing “patriot” could see through it as a base jingoist appeal to nationalism. There’s absolutely nothing wrong with being proud to be an American (or more accurately a U.S. citizen), but the song is as subtle as a brick to the head. I forgive you Kurtis. I’m still fond of the album to this day.