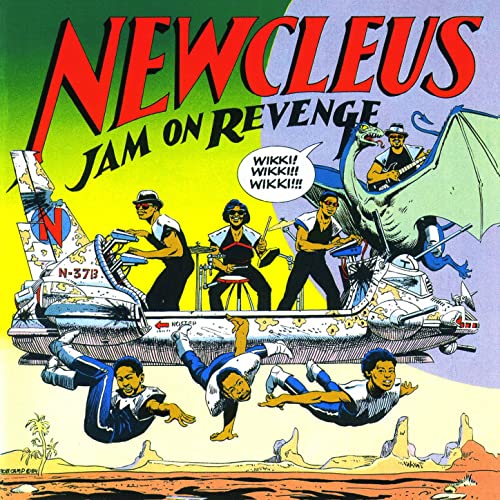 If you know Newcleus for either “Jam On It” or “Computer Age,” you probably don’t know what happened to them after either of those songs, and let me tell you it’s pretty fucked up. Starting out as Jam-On Productions in the late 1970’s, the crew hailed from Bed-Stuy (do or die) and rocked parties all throughout Brooklyn. By the 1980’s they had morphed into a political/spiritual act named Positive Messenger, and while shopping around their album for a record deal Ben Cenac a/k/a Cozmo D included “Jam-On’s Revenge” as a joke. The famous WIKKI WIKKI WIKKI phrase was meant to mock a DJ they beat in a battle, who told them they were good but they couldn’t “wikki wikki wikki” (imagine someone imitating a record being scratched) on the turntables.

The B-Side wins again. The song that Cozmo D never meant to be taken seriously caught on and led to them getting a deal with Sunnyview Records, who immediately requested the group record a sequel. Now calling themselves Newcleus (a pun on the group coming together like the nucleus of an atom), the group hit the studio and created “Jam On It.” Growing up the two songs I would use to test any speakers I bought were “Jam On It” and “Planet Rock,” and if I was happy with the how the bass hit I knew they were keepers. I honestly never knew of “Jam On Revenge” until writing this review, because I didn’t even know Newcleus had recorded a whole album.

DID THEY record a whole album though? This is where things start to get incredibly “shady” as Q-Tip would say. A DJ for New York radio station WBLS named Jonathan Fearing started airing his own arrangement of “Jam-On’s Revenge” before “Jam On It” was even recorded. It subsequently got renamed “Jam On Revenge” and Fearing was getting a lot of the credit for it being a hit, so Sunnyview brought him in and gave him carte blanche to do whatever he wanted with what Newcleus recorded. You might think that’s not so bad if his magic touch helped the group sell a lot of records, but the deal with Sunnyview gave them NO ROYALTIES on album sales, so even with Fearing’s help they literally didn’t see a dime from “Jam On Revenge.”

If “Where’s the Beat” sounds like a joke based on the old Wendy’s fast food “Where’s the Beef?” commercials, IT IS. Cozmo D did the song’s rap under protest, and by his own account was “disgusted” by how the group was treated by the label, allegedly even locking them out of the recording studio when the album was being mixed. Telling Sunnyview that Newcleus wanted nothing to do with them any more, the label responded that was just fine, but they could no longer call themselves Newcleus because the label now owned their name. “Where’s the Beat” has also been dropped from all reissues of “Jam On Revenge” because it’s barely a Newcleus song at all. The label did release a second Newcleus album without the involvement of the original members. Maybe I’ll take a look at it someday, but after learning how they were screwed by the industry, I’m not in any hurry to do so.

If you thought the story of Newcleus couldn’t get any more bitter, I’ve got two more notes that will leave you begging for a glass of water to get the taste out of your mouth. Euro funk group Snap! achieved bigger success sampling “Automan” for their hit single “Rhythm Is a Dancer” than Newcleus ever did, and founding member Chilly B died of a stroke in 2010 at only 47 years old. Many of the songs that Newcleus were best known for in their day had little to do with him or Cozmo D, such as the single “I Wanna Be a B-Boy,” which like “Where’s the Beat?” has been deleted from all reissues of “Jam On Revenge.” Like the other missing songs it wound up on other albums and compilations throughout the years, milking every last dime possible from the Newcleus name.

Normally if I enjoy a classic hip-hop record I’d tell you to go out and get a copy, but I’m really not sure if I should do that with “Jam On Revenge.” I think that Cozmo D gets some sort of compensation for re-issues these days, though it’s not clear if he had to sue to establish paternity of the original recordings, or if Rhino Recordings just decided to be honest when they acquired Sunnyview’s assets (the original label now long out of existence). It’s a potentially murky issue and even if what the remaining members of Newcleus get is more fair now than it was then, the record is probably nothing close to what they wanted it to be thanks to a meddling deejay and a corrupt label. The computer techno hip-hop sound of “Jam On Revenge” is so similar to what Afrika Bambaataa was doing back then they’ve been called blatant clones, but for me the record can stand on its own. Just remember when you sign a contract to read ALL of the fine print.