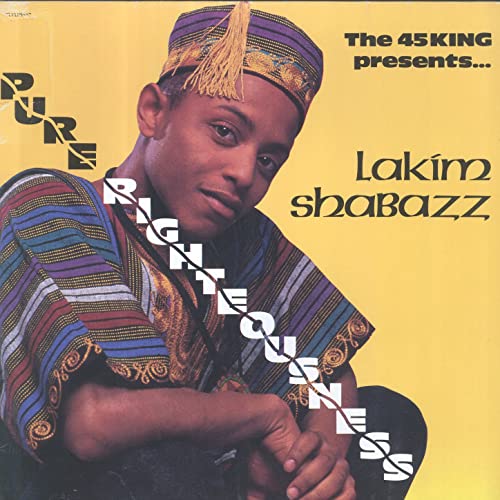 Never underestimate your ability to learn something new. I had gone so many decades thinking of “The 900 Number” as a 45 King instrumental that it never occurred to me a RAP version existed featuring Lakim Shabazz. (The audio version was taken down by a copyright claim, but the acapella version remains.)

Who is Lakim Shabazz though? If his name rings a bell for you then it’s probably because he was a founding member of the Flavor Unit, a rap collective organized by the 45 King that evolved into an artist management group run by Queen Latifah. Latifah and Lakim are both from New Jersey as are a significant portion of the crew, but 45 King was from The Bronx and made his mark (pun intended) deejaying in NJ. 45’s name came from the obscure 45’s he’d spin, and in turn use to produce instrumentals for up-and-coming emcees. Lakim Shabazz’s debut album “Pure Righteousness” is produced entirely by 45 King, and when you hear the crispy drums and horny horns of “First in Existence” that comes as no surprise.

The irony of “Pure Righteousness” being released on Tuff City Records is not lost on me, but for those not aware of their history, this is one of the most litigious record labels in existence. They shopped around for the rights to a slew of classic hip-hop breaks, then went around suing every producer who had used them in a song, such as the famous “Impeach the President” by the Honey Drippers. This becomes DOUBLY ironic when you hear the song “Sample the Dope Noise,” which itself features a very famous break from the blaxploitation film Black Belt Jones. If Tuff City had acquired it would they have sued 45 King for infringement, or would they have just given him a pass and let him use it for free?

There isn’t much on Lakim Shabazz’ debut that I can complain about. I suppose a minor beef would be that Shabazz shouts out the entire Flavor Unit on “The Posse Is Large” yet not a single one of them is featured on the song. “We take rap serious, it’s not a hobby to us!” Okay so why not include some of those serious emcees, like Apache and Queen Latifah, on a song that talks about your large posse? If ever there was an excuse for a posse record this was it! We’d have to wait for that to come later.

It should be mentioned at least in passing that Lakim’s last name comes from the Tribe of Shabazz, and the album features the same Five-Percent Nation and NOI influences as contemporary artists like Brand Nubian. You can hear Malcolm X samples throughout “Black Is Back” and he declares his intention “spread my wisdom [and] educate my people” with his rap.

“Pure Righteousness” is a surprisingly short album, clocking at right about a half hour, but it’s a tight and compact half hour without any wasted time for skits, filler or bullshit. That’s one thing that’s very clear about Lakim Shabazz with or without his Nation of Gods and Earths influences — he had no time for BS on his debut. It makes me smile a little knowing that due to his friendship with the 45 King he ended up rapping on “The 900 Number,” which was made famous both by the Ed Lover Dance on Yo! MTV Raps and subsequent DJ Kool recycling for “Let Me Clear My Throat.” In those cases Shabazz is never heard and honestly he couldn’t be, because his strident message and strong delivery wouldn’t allow for such silliness. Some might tell Lakim Shabazz to lighten up and have some fun, but I wouldn’t have this slept on 1980’s rap album any other way. His serious raps and 45 King’s seriously dope production make this one well worth your time.