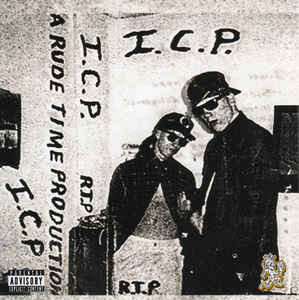 In a previous review of “Beverly Kills 50187” I talked about the transition of a seminal Michigan rap group from being the Inner City Posse to the Insane Clown Posse. Most of the albums from after the transition are relatively easy to find, particularly if you’re willing to settle for a digital download, but pre transition ICP releases are much harder to find. In fact calling “Intelligence and Violence” an album might be stretching the definition of an “album” to the breaking point. This release was recorded using a karaoke machine to a cassette tape, featured handmade photocopied art folded into each copy, and was given away free as a promotional tactic to raise the Posse’s profile. This wasn’t just hustling on a shoestring budget — it was hustling with absolutely NO budget whatsoever.

I’ve seen a few listings that suggest “Intelligence and Violence” was remastered and reissued for hardcore juggalos, but it could only have been a limited issue edition if that was the case, because I can’t find any retail copies of it as of this writing. I’m not sure how much remastering would do for something this raw anyway. The fact it was recorded with a karaoke machine bleeds through every song. Violent J’s vocals bounce and echo off digitally rendered walls, reverberating over simple funk loops, but this simplicity lends a charm to the songs by J and D-Lyrical (owner of the karaoke machine) they wouldn’t otherwise have. “Somethin’ to Say” sounds like a rough demo from a couple of aspiring rappers looking for a break, while trying to invent their personas to stand out in a crowded field.

You might be wondering where Shaggy 2 Dope is though on “Intelligence and Violence.” Joseph Bruce (Violent J) and Joseph Utsler (2 Dope) were friends and comrades at this point, but their first professionally produced release wouldn’t come until “Dog Beats” in 1991. If you listen to anything put together before this point, the whole “dark carnival” mythos had not even been established yet. Take this as the compliment which it’s meant to be but when you hear them scratching “kick the science” on songs like “Gangsta Times,” they sound more influenced by the Beastie Boys and 3rd Bass than the already raucous lifestyle Bruce was living at the time.

If nothing else “Intelligence and Violence” lives up to the description, largely thanks to Violent J switching back and forth between trying to drop gems and then drop lines for pure shock value. The seeds are being planted for the Insane Clown Posse’s future, but they had barely even begun to germinate on this cobbled together album. It’s actually more interesting in hindsight to hear ICP’s early beginnings and realize just how hard they had to work to cultivate the signature sound that would set them apart from the rest of hip-hop. It’s hard to call “Intelligence and Violence” good given just how rough it is, but what’s funny is that if it was properly mastered and recorded it would be “okay.” It’s not the ICP you know and love, but it would’ve been good fodder for one of those “lost gems” YouTube shows if this had been the only thing Violent J ever did.