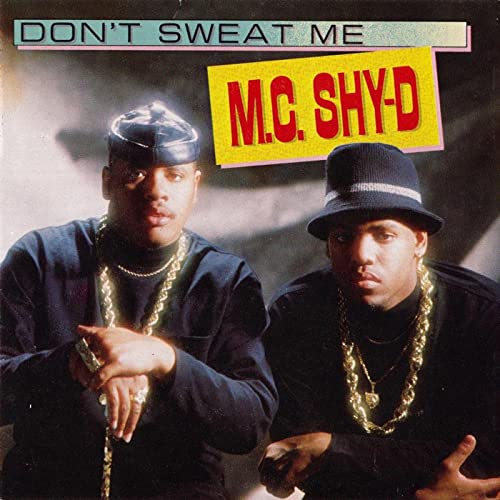 How did an old school rapper from the Bronx who is Afrika Bambaataa’s cousin wind up signed to Luther Campbell’s Luke Skyywalker Records? Sadly I don’t have a good answer for you. It was weird back in the day that M.C. Shy-D was part of a label better known for Miami bass and raunchy rhymes than traditional Boogie Down beats and breaks, and in hindsight it’s still strange. Perhaps Uncle Luke wanted the credibility of having someone from the prior generation on his label. Perhaps Shy-D wanted to tap into the marketing muscle and mainstream attention that 2 Live Crew had garnered. Either way it was not a marriage made in heaven and their partnership dissolved after only two albums together.

“Don’t Sweat Me” was Shy-D’s attempt to bounce back on a new label, but he still recorded the album at C.S.I. Studios in Hollywood, Florida. Perhaps that’s why some small vestige of the Miami bass scene that Uncle Luke and friends were known for can still be heard on “Groove.” It sounds like Shy-D making one last grasp to hold onto any fans he made while touring with 2 Live Crew, but given none of his albums charted higher than 35th on the Billboard Rap Charts, I’m not sure how many fans there were to grab.

I’d usually say “I mean no disrespect” to an artist when I’m about to tell you the reader a harsh truth about an album. This time though the disrespect is earned because this album sounds creatively bankrupt in every way. “You Are Everything” is Shy-D’s blatant attempt to make an LL Cool J style “I Need Love” song. There’s no mistaking it or disguising it. The slow tempo, the heartfelt pleas, the softly tapped drums, it’s all there.

Every time I try to give “Don’t Sweat Me” another chance, Shy-D sounds like a poor imitation of MC Shan doing poor imitations of hits for other rappers. “I Can Make You Dance” is a horrible mash up of Young MC and The Fat Boys. “G.T.F.O.M.F.B.” is Shy-D’s attempt to make a N.W.A. track while simultaneously recycling the same Isaac Hayes song he sampled for “Yes Yes Y’all” a few years earlier. Different breaks, same record. The title track of “Don’t Sweat Me” proves you can rip off Eric B. & Rakim, X-Clan, EPMD and MC Shan all at the same time. Don’t believe me? Just listen.

The strange thing about the phenomenal lack of creativity found on “Don’t Sweat Me” is that unintentionally became a time capsule for a very specific time in rap music. By blatantly copying any success any other producer or rapper from the era had, M.C. Shy-D unintentionally captured everything going on like a Wayback Machine prototype. Don’t get me wrong, there’s nothing clever about ripping off Big Daddy Kane’s “Smooth Operator” on “Got It Good,” but the song becomes a happy accident of listenable rap as a result. Perhaps the moral here is that if you’re going to jack styles, you might as well jack the BEST styles, since you can almost get away with it.

It’s vexing to say I both love and hate this album at the exact same time. As someone who can see through the bullshit to realize M.C. Shy-D didn’t have a single original idea of his own, I can’t credit him for anything on “Don’t Sweat Me” that actually works. On the other hand though if you happen to be nostalgic for any of the rap acts he rips off, “Don’t Sweat Me” might be just the back scratcher that can reach your itch. You’d still be better off listening to the real MC Shan than the clone, but let’s just split the difference between genius and stupidity right down the middle. This is accidentally good just by virtue of how shameless it is, and that’s as nice as I can be.