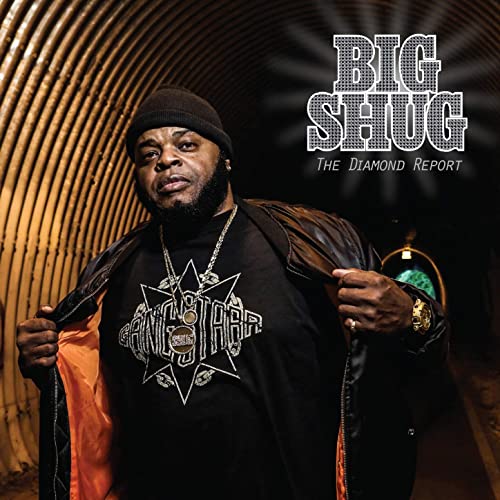 Talking about Cary Guy b/k/a Big Shug is complicated. Out of respect to his friend, mentor and fellow Gang Starr Foundation member Keith Elam (R.I.P. Guru) there’s a natural inclination to show him respect. He’s also paid more than his fair share of dues in hip-hop. “Big Shug’s a lifer” says Shug on “Old Man Rapper” from “The Diamond Report.” He’s not wrong. His career started in the 1980’s, was interrupted by a prison bid, and picked right back up when he reunited with his Boston comrade Guru for cameos on Gang Starr records. Although he didn’t officially release any solo albums until the 2000’s, rap fans were already well familiar with his voice and I’d even opine they were inclined to like it. There’s just something that feels right about hearing Shug on a DJ Premier produced track like “Emf.”

The reason it’s complicated though is that Shug is arguably NOT GOOD at rapping. His delivery sounds labored, his wordplay is simplistic, and when he decides to croon “GOOD NIGHT IRENE” to quote Michael Schiavello. His singing is more than your auditory receptors can handle and your brain is immediately concussed, leaving you slumped on the canvas. He doesn’t mean for the titles of tracks like “Doing My Shit” to be as apt as they are, but there’s no doubting the accuracy. “I’m gonna stay the grind, whether it’s wrong or right.” Shug, it’s wrong. Stop singing dunn — or at the very least put a warning label on it that “Listener Discretion Is Advised.”

“The Diamond Report” is further complicated by being an astounding 58 minutes long. Even if you like Big Shug, he’s a rapper best served in small doses, which is why he was so essential to posse tracks on Gang Starr records. For about a minute or so his hardcore demeanor and incredibly basic flow are charming and memorable. Stretched out over the length of three to four minutes, the flaws in his raps become too obvious to ignore.

Grant Jones once opined of Big Shug that “a turd is a turd no matter who tries to polish it” and that couldn’t be more obvious than on a song like “I Gotcha.” DJ Reel Drama does his best impression of a Primo track, and it’s a pleasant head nodding affair, but lines like “A lot of lames, in this multi-colored game” aren’t just bad — they don’t make sense. His references are also incredibly dated. “I’m Everlast, welcome to the House of Pain.” The 1990’s called — they want their swag back.

If you ignore the flaws of his raps and focus strictly on the production there’s still a lot to like on “The Diamond Report.” DJ Premier has a reputation for making classics, and even lackluster emcees benefit from his expert hang on the boards. “Stay Course” and “Still Big” will end up getting the replay treatment — particularly the latter thanks to the Guru samples and Primo scratches. There are even some cameos that help elevate tracks that would otherwise be forgettable. Salute to M-Dot and Singapore Kane for guesting on “No Real Rappers,” B.A.M and International Dreez for joining M-Dot on “Keep It Cool,” the latter of which features the lone production from Lil’ Fame of M.O.P. fame. You can hear a few of his trademark interjections creeping into the mix and they’re entirely welcome.

The downside of these cameos is that every single rapper who works with Shug is better than Shug, which is understandably why he keeps them to a minimum. I get it dog. You don’t want to be embarrassed or shown up on your own album. Unfortunately trying to be the star of your own projects is almost always a mistake and even otherwise impeccable production can only take you so far. If “The Diamond Report” was strictly an hour long instrumental joint I’d have no problem telling you to cop that shit right now. It’s highly listenable right up until the point you start paying attention to the incredibly corny lyrics of songs like “All I Need Is You,” at which point the project collapses under its own immense weight. You can still enjoy this one for the music if you get sufficiently high or drunk first before pressing play.