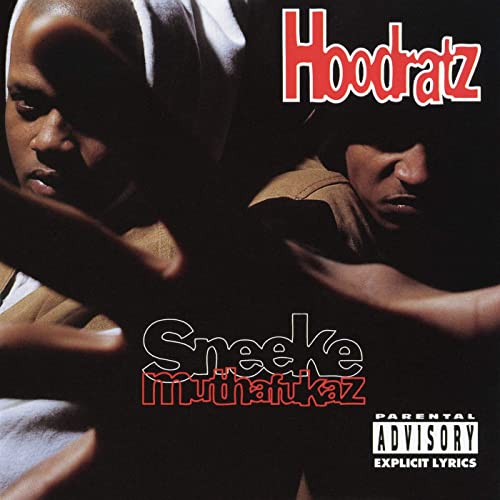 It’s pretty bold to be an Onyx rip off and actually sample Sticky Fingaz on a song, but that’s exactly what the “Sneeke Muthafukaz” called Hoodratz do on the song “Had a Bad Day.”

If the opening paragraph didn’t already make it perfectly clear, this is not the same Hoodratz crew that was down with the Ying Yang Twins. This crew of cheese eating urban dwellers made their one and only album in 1993 and promptly disappeared from rap history. Good. That’s as it should be. Hip-Hop was inundated with Onyx imitators and clones after “Slam” went viral (or whatever the early 90’s equivalent of “going viral” was) and most of them were pretty bad. The Hoodratz are far from the worst I’ve heard, but calling a song “Grimee” betrays what you are before even putting the needle to the groove. They are yelling into the mic with every breath.

“Wait a second! Hookers in the hood getting hectic! Not what you expected!” Actually it was exactly what I expected, aside from the fact it’s accidentally a public service announcement for wearing a condom. Believe it or not these rats actually crawled far enough out of the subway terminals to surface with a couple of singles, and one of them even got a music video. I don’t remember ever seeing “Murdered Ova Nuttin'” before writing this review, but here it is.

Once again the Fredro Starr and Sticky Fingaz style delivery is in full effect, as well as the tell tale spelling of song titles using their pronunciation — “Ova” instead of “Over.” They even give a shoutout to their inspiration, which is a form of flattery I suppose: “Bacdafucup like my niggaz Onyz!” It’s hard to be “Sneeke Muthafukaz” when you’re not trying to hide or disguise your intentions at all. That’s almost commendable? If you’re going to be a blatant ripoff of somebody else, you can at least be honest about it.

Here we have the only other hit by the Hoodratz, and I’m stretching the definition of the word “hit” to its limit. It’s the only song I remember hearing more than once from the group back in the day, and it reflects a popular sentiment amongst NYC rappers at the time that street vendors were hurting their sales. I’m certainly not arguing with any artist who demands that counterfeit sales cease, but when they compare themselves to A Tribe Called Quest and Kool G. Rap, they are setting up the unreasonable expectation they should go gold too and only bootleggers are to blame. Nah son. You were never going gold, bootleggers or otherwise, and the record label you signed to is (let’s quote Onyx too) the “shifty, low down, dirty and grimy” ones keeping nine out of every ten dollars you make anyway.

I don’t think the Hoodratz were attempting to write their own epitaph with “Get Off Ma Dic,” but it seems fitting that it’s the last track on the album. If anybody from Onyx looked at the album cover, read the song listing or listened to a single song on “Sneeke Muthafukaz” that’s exactly what they’d say. “Like the 2 Live Crew, bitch I banned you!” That’s not even the first time they used that punchline on the album, but at least it’s the last time I have to hear it. The Hoodratz successfully prove some things don’t get better with age, and that’s all they prove. This is an entirely forgettable album.