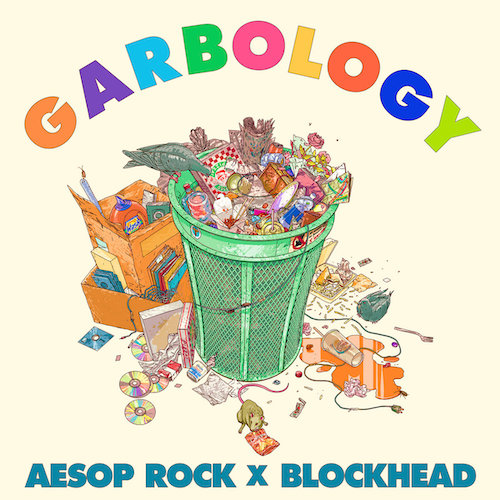 “Garbology” was borne out of Aesop Rock simultaneously dealing with the pandemic and the death of his close friend Kurt Hayashi in January 2020. Aes was struggling creatively, so asked his friend Blockhead to send him some beats, figuring that coming up with rhymes might be a more digestible task than creating beats. The initial plan was just to keep Aes moving forward creatively, but they ended up writing an entire album.

Blockhead has been collaborating with Aesop since they met in college in the mid-90s, and while Blockhead’s handled much of the production on Aes’s early work, “Garbology” is the first Aesop Rock album to be 100% produced by Blockhead. Aes and Blockhead have always shared a similar beat aesthetic, but Blockhead’s beats tend to be a bit more melancholy than Aesop’s, utilizing unconventional sample sources while always having a strong beat. The dynamic of Aes’s almost unrelenting flow and Blockhead’s sad-but-playful beats is like chocolate and peanut butter, and it’s hard to believe it’s been almost 15 years since we’ve got to hear Aes rapping over a new Blockhead beat, Hearing these two friends lock back into a groove is the highlight of “Garbology.” They pick up like no time has passed, and relinquishing production duties gives Aesop some room to focus on the rhymes.

From the get go, they let you know they aren’t playing. After a brief intro, the album goes into “Jazz Hands,” with Aesop making references to the pandemic and racial justice protests that have taken place over the last year, and particularly of Aes’s hometown of Portland. The drums on the track don’t kick in until the very end, giving Aes an open playing field to spit his rhymes.

“Niece on the phone saying, iIan, you should visit more’
We could build forts while the pigs court civil war
Miss you, miss you more, see you on the far side
Scuffed shoes, couple new scars in the archive
I’m not here to pull scarves out
Here to pick tumblers underwater with his arms bound
From in chains to the heart of where art thou
I’m out there down to throw grapnel at a guard tower
Down to spray piss on a cop car
It’s rage in the form of Renaissance art”

Aesop is known for his verbose style and tangled rhymes, but the dude is also funny as hell. On “The Smartest People I Know” showcases Aesop’s comic and dramatic timing as he acts out talking to a neighbor over a sparse beat:

The song then goes into some Matrix-level metaphysics:

“All the smartest people that I know seem to teeter in a paranoid state
You can know it all and never know you haven’t actually departed point A
Wait, wait, wait, wait, wait, wait, you saying there’s a B?
No, I’m saying you won’t ever need to limit the addition when you’re free.”

The album is a treasure trove of Aesop Rock one-liners and lyrical puzzles. I’ve had this record on repeat since it came out a few months ago, and I’m still hearing things I missed the first thirty spins. Like “Every time an influencer offers advice/I feel years coming off of my life’ from “Difficult,” or “I’m trouble/You troubleshoot a lot” from “Fizz,” or “You laughing cuz I’m different/I’m laughing cuz you’re all the same.” There are plenty of references to the paranormal, and spirit world, continuing a theme he explored on his last album. There are also not-so-subtle jabs at other rappers, as well as many references that I have yet to decipher. He also directly references the death of his friend on “Abandoned Malls” rapping:

“Zombie in the stale air, logging his Hayashi pics
I been trying to teach your kid to ollie
She got the basic motion and glow when she show her mommy”

Aesop Rock’s Lice counterpart Homeboy Sandman shows up on “All Day Breakfast” for the album’s only guest appearance. Over a psychedelic guitar sample, Homeboy spits the kind of fire you know and love him for:

“Based on only optics I could pop in and approximate a tub to soak
Based on only oxygen I’m known to blow a cloud of smoke
I just rode in town a couple hours ago
Not too many and already I done found the glow
Swam the fountain
Climbed the holy mountain
Spent the pot of gold
And would have kept it low key but the homey asked me how’d it go?”

While Blockhead’s beats are prettier than the beats Aesop generally makes, they are still a good match for Aes’s flow. He leans heavily on acoustic instruments (piano, bass, drums) and layers a banging beat behind them. “Legerdemain” mixes a funky guitar lick with chaotic drums to good effect; “Difficult” layers a heavy beat over a jazz dirge; “Oh Fudge” is built around an acoustic bass.  “Garbology” is the study of a society based on its garbage, and both Aes and Blockhead are mining cultural cast-offs for inspiration, Blockhead in the samples he’s using and Aesop in the themes he’s exploring.

This is an album borne out of the pandemic and grief and it shows. There is a fog of ennui surrounding this album, and at times you can tell that this project started with Aes trying to find inspiration rather than by him being kicked in the ass by inspiration. Luckily that is the exception rather than the rule for the album, because on most of it Aes sounds like he is exorcising demons rather than wallowing in misery. Still, “Garbology” is less cohesive than “Spirit World Field Guide” and as a result not quite as strong.

I’ve been obsessively listening to Aesop Rock for the past year. “Spirit World” hasn’t left my rotation since it came out at the end of 2020, and I’ve been playing the reissue of “Labor Days” as well. It’s interesting to compare 2001 Aesop Rock to 2021 Aesop Rock. He lacks some of the swagger and bravado of his younger self, but he more than makes up for it in self-assurance. He is no longer trying to prove himself, he is just trying to make the dopest rhymes he can. His intricate rhymes have made for the perfect pandemic soundtrack, echoing the anxiety and paranoia that seems to permeate these times. There are few better ways to ride through the current Omicron surge than spinning “Garbology” and joining Aesop and Blockhead as they excavate garbage for gold.