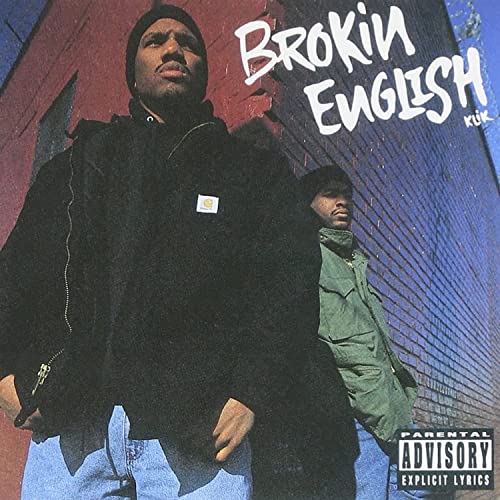 Allow me to introduce you to the Brokin English Klik and their self-titled album from 1993. These are two “Hard Core” brothers named J. Mackey (a/k/a Mack 10 — no relation to Westside Connection) and J. Jasmin a/k/a Phase Da’ Mad Scientist. I’m sure that both of these New York City emcees thought that signing with Wild Pitch Records was going to be their big break. There was a brief period of time from the late 1980’s through early 1990’s when Wild Pitch’s output was legendary — Main Source, Lord Finesse, Ultramagnetic M.C.’s and The Coup just to name a few. By the time Diamond D referenced them on “Show Business” by A Tribe Called Quest (from “Midnight Marauders,” also released in ’93) they were legendary for another reason — stiffing artists who were foolish enough to sign with them.

Perhaps Mack 10 and Phase hadn’t heard about Wild Pitch’s reputation before they signed on the dotted line. Maybe they had and thought “Nah we ain’t going out like that, we had a lawyer look this contract over, so we’re good.” Maybe they just got such a fat advance for their deal that they were willing to bank it and worry about any problems later on. Unfortunately 1993 was near the tail end of Wild Pitch’s run. Let’s reference The Coup as an example of the problem. Their first two albums came out in ’93 and ’94 on Wild Pitch and both were critically acclaimed. The third? It didn’t arrive until four years later on the previously unheard of Dogday Records. In fact the only relevance Wild Pitch had after 1994 was when their catalogue was sold and reprints/re-issues starting being released in the 2000’s.

If I’m being honest though the lack of traction for Brokin English Klik isn’t entirely the fault of their label. When I listen to Mack 10 rap he sounds like a low rent A.G. (Andre the Giant) and makes me want to listen to vintage Showbiz & A.G. records from the same era. (“Can I get a soul clap?”) Phase is just kind of there. He neither blows me away nor makes me mad at a lack of effort being put in. In fact there’s no doubt they were working hard on this album if you judge by their Discogs entry — providing their own beats, doing their own deejaying, playing the instruments. It could be because Wild Pitch didn’t have the budget to bring in any big name producers, but songs like “Underground Dweller” give you the feeling Brokin English Klik were DIY and very proud of it.

It’s not as though this is a bad album for the times, nor does it completely fall apart long after its heyday, but there’s just nothing to it. The Klik doesn’t do any one thing exceptionally well. The album feels like a tax write off for a record label that was already struggling, an excuse to say “oh well we tried” without any real consideration for what would happen to Phase or Mack 10 if the project failed. Even if it had succeeded would they have ever seen a dime from it? Probably not. Where are they now? Who even knows. The Brokin English Klik are an almost forgotten footnote in the history of rap music, but for the brief moment in time you spent reading this review, they get a second (and perhaps deserved) chance to be remembered. It’s also a lesson that Q-Tip was right when he christened industry rule #4,080.