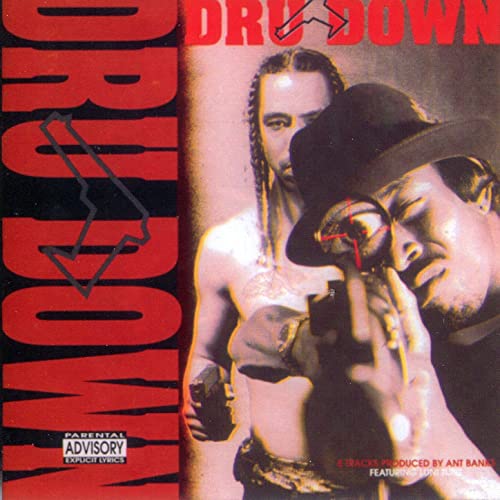 Fools From the Streets

Dru Down :: Fools From the Streets

The cover art of “Fools From the Streets” creates unnecessary confusion by not mentioning the album’s title anywhere. The only notes are “eight tracks produced by Ant Banks” and “featuring LuniTunes,” which tells you what tiny imprint C-Note Records was hoping would sell Dru Down to the skeptical. At least one re-issue of this album simply labels it as a self-titled Dru Down CD, and another titled “Explicit Game” recycled ALL the tracks from here and put them in a different order. No matter whether you thought it was called “Fools From the Streets” or not though, if you remember Danyel Robinson’s debut, it’s not for the unremarkable and hella generic cover art. For me the song that hooked me on Dru Down back in the 1990’s was the self-explanatory “Pimp of the Year.”

The single features a sample of “Shorty the Pimp” on the hook and the damn near recycled to death “Seven Minutes of Funk” by The Whole Darn Family. I probably prefer EPMD’s “It’s My Thing” to this song for the usage, but it’s on par with Tha Alkaholiks’ “Only When I’m Drunk” which came out the SAME YEAR (told you it was overused). The production isn’t what makes the song though — it’s Dru Down’s undeniable pimpness. He’s got the vocal inflection and mannerism of a straight up stereotypical P-I-M-P, and the entire song is built around the idea that he can get a broad to do anything he wants. “I had me a hoe or two or mo’/way back in eighty-fuckin-fo’/that’s when I was a teen/but my dick was still big to make a bitch bleed/And of course I’m slappin hoes, smackin hoes/up and down the fuckin ave-noes.” Sexist? Yes. Vulgar? Absolutely. In fact edited versions renamed the song “Mack of the Year” to get more radio play. It needed to be this raw though.

The entire appeal of Dru Down was the absolute cranking funk of the production on tracks like “Ice Cream Man” (featuring The Luniz) and the unapologetically proud raps about selling “Coca-Cola” and “Ice Cream” to the fiends.”Nappy Dugout” got around as a sample a lot in ’93 too, also showing up on King Tee’s “A Hoe B-4 Tha Homie” featuring Ice Cube, but flip a coin and I’ll take either one on any given day. They’re both great. That’s one reason we absolutely need to give Any Banks his props for doing eight tracks. Even on the songs he didn’t produce (“Ice Cream Man” is done by Keenan Foster) his influence is still felt, and there’s a very Oakland/West coast vibe to the entire project as a result. Case in point – Banks looping The Blackbyrds for “Weak Move.”

Ice-T, Da Lench Mob, and the Bloods & Crips all looped the same song, but this time I unquestionably prefer Dru Down’s use. “Making weak ass moves ain’t cool/you need to grow up and find your ass a new rule … because I talk hella shit and back it up quick/you better listen to me, because I don’t bullshit.” Dru Down might be exaggerating about this street cred for the sake of the record, but so were all of his contemporaries at the time, and he sounds as authentic as any of them if not more so in some cases. I don’t think making a “Weak Move” in Mr. Robinson’s neighborhood would be well advised.

Even on more obscure album tracks like “Bigger Than What You Think” his storytelling is as impeccable as the production. Dru Down is explaining his come up from the mean streets of the O and simultaneously talking down on anybody who doesn’t give him the stripes he’s earned for his success. I can’t overstate the importance of this to a young Flash when he first heard Dru Down — he was new to me, but he didn’t sound new to the GAME. Dru Down talked like a seasoned vet and his accent (“mayne” instead of “man” and the like) made me buy in to his persona. The entire presentation of “Fools From the Streets” made me think “Where has Dru Down been hiding? And why do I live in a place where people aren’t giving him props?”

No matter what version of Dru Down’s debut you might own, to me this is a certified Oakland classic. I’ve seen reviews of the re-titled “Explicit Game” give this release more middling scores, but I suspect they were written at a time when all the samples I previously mentioned were way overdone on a million albums that seemingly came out prior to Dru Down’s re-release. I think in the context of 1993 it’s more fair to say that who came first is arguable if they were all in the studio making albums with no idea who had a release date first. It’s not like they could go on the internet and go “damn we gotta change that up somebody else already did it” because streaming didn’t exist. PLUS… Dru’s personality and cinematic raps aged well over these fine ass funky tracks. I’ll rate it as something to own by any name.

Dru Down :: Fools From the Streets
7.5Overall Score
Music8
Lyrics7