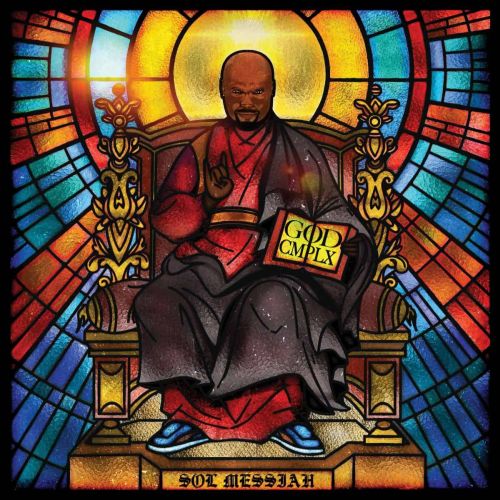 To the uninitiated, this record probably sounds like some self-righteous gospel rap. Far from it – that’s not to say that certain artists involved aren’t prone to leaving Earth with their performances, but Sol Messiah is a producer that has paid dues without being appropriately acknowledged, let alone worshipped. Hailing from Atlanta, he was a breakdancer who himself made the journey to the Jerusalem of hip-hop: New York, to join the legendary Rock Steady crew. From there he learned to DJ, then took the next logical step into production. This saw him work with Dallas Austin (TLC, Madonna, Boyz II Men) before going their separate ways in 1997. Twenty-five years ago. Building his brand with production for the likes of Chamillionnaire, Dead Prez, and David Banner, Sol Messiah’s name has more recently been intertwined with Sa-Roc, an emcee from Washington, D.C. now signed with Rhymesayers. Heads know who Sa-Roc is – one of the best rappers of the last few years – she dropped the excellent “The Sharecroppers Daughter” in 2020. It’s important to mention this backstory because it helps explain both the diversity and intelligence applied to the beats heard on “GOD CMPLX”. This is someone that knows what they are doing.

I thanked the heavens when I heard scratching on the introductory “Who’s the Star” – you know an album is going to be something special when it kicks off this way. MOP’s “Warriorz“, Dilated Peoples’ “The Platform“, Styles of Beyond’s “2000 Fold” – at its bare minimum, it’s refreshing to hear an intro that sets up the listener and doesn’t outstay its welcome. Sa-roc is all over this album and gives it much of its identity. Her voice is unique, equal parts raw heft and defiantly elegant. Named after the pioneering Sha-Rock, Sa possesses a captivating presence that’s hard to ignore and shows her versatility throughout. There’s a line on the collaboration “GOD CMPLX” with Crooked I that accurately sums up Sa-Roc: “my tongue’s slicker than black ice, flow is refined“.

Locksmith was on a wild run with his 2015 album “Lofty Goals” and the no-skips offering with Apollo Brown from 2018 (“No Question“) but it feels like his status has dipped in recent years. He appears on “Freedom” alongside Stic.Man (of Dead Prez) for an uplifting sparring session that boasts an irresistible hook. Seriously, I don’t know if it’s a sample or an uncredited guest but it steals the song.

Sa-Roc is back at it kicking the “big uterus energy” as she so eloquently puts it on “Roc Steady”. You can actually buy t-shirts with that on. It’s littered with wordplay and playful flow patterns but the transition into a cockney accent feels like a nod to her previous jabs at Nicki Minaj a decade ago. I’m not saying it’s intentional but it just made me recall the interview Sa-Roc did with HipHopDX in 2016 which mentioned the lyricist’s opinion on Nicki. As a father of two daughters, I’m in agreement with Sa-Roc there. She’s joined by two fellow fire-spitters, Che Noir and Lyric Jones, on “The Hard Way”; a classy reimagining of Bahamadia, K-Swift and Mecca Starr’s memorable 1996 single “3 The Hard Way”.

Sa-Roc certainly possesses the characteristics of a goddess, but it’s Sol Messiah that litters the record with interludes reiterating his own godly status. The Evidence track, “Limitless”, sees the Dilated one continue his more recent approach of super laid-back delivery, but this time Sol Messiah gives him a more lively beat to work with. Sticking some scratches in really energizes what could have been a dreary experience and it ends up being one of the strongest moments.

Cambatta blew me away with his “Lunar Solar Duality” album last year (yes I was a year late) and I stand by the rare 9.5/10 rating. It’s an essential listen, and he’s back here with the riotous “Sol Supreme”. I can’t even quote his lyrics as he states “you a joke if you quote what I wrote” – and yes I know that’s basically quoting him. It’s this type of mind-fuckery that Cambatta champions and while this track doesn’t reach the levels of his storytelling abilities found in his own material, it’s still a joy to hear somebody effectively combine intricate writing with vicious delivery, especially over another dope Sol Messiah beat.

Admittedly, this isn’t a perfect album. The first half is so good that it was almost inevitable the second half dips. Mickey Factz raps over some Sol Messiah beats on the imaginatively named “Mickey Messiah” but feels pedestrian compared to the songs around it, both in terms of structure and delivery. Sol Messiah also contributes a drumless piano loop for Planet Asia’s “Sun-Dey-Skool” which is a welcome comedown from the intense rap performances that precede it, as is Tristate’s “Dogon”, but they operate at a tier or two below the other songs. Other than that though, this is up there with the best hip-hop albums of 2022. You’ve then got a number of Sa-Roc tracks where she automatically elevates the tone: “Computer Roc” and “Slipping Sands” both have that intangible feel that Sol Messiah and Sa-Roc have nurtured over the years; the former song for her raps and the latter for her singing on what’s essentially a solid Murs record.

“Rhymeslayers” is an interesting combination of artists from the Rhymesayers label – Slug, Aesop Rock and Sa-Roc – three completely different types of rappers. Slug’s everyman, Aesop’s vocabulary vomit and Sa-Roc’s unstoppable force shouldn’t really work together but it’s constantly interesting to the point where these three could form a supergroup. SA+Roc anyone? You can have that one. Hell, the album may even peak right at the very end with Zion I’s Baba Zumbi (R.I.P.) tearing up the same beat M.O.P. did (“Welcome 2 Brownsville”) on “Jah City”. But it’s Sa-Roc again, with closer “The Light” that just feels different, and evokes the same energy her record “The Sharecropper’s Daughter” did.

My favorite song on that album was with Styles P (“Rocwell’s America”) and my favorite Sa-Roc track in recent memory is Khrysis’ “The Disrespect” with Rapsody, and they both succeeded at something beyond simply snapping with a sick sixteen. There’s this captivating sound you hear producers assign to Sa-Roc that I don’t really see people try to quantify. Sol Messiah knows Sa-Roc’s strengths lie in her unique style – simulatenously formidable and ferocious, yet never losing this hypnotic femininity. I’m guilty of lazy comparisons in reviews, and it would be easier to slot Sa-Roc in somewhere between Rah Digga and Killah Priest, but a more accurate description of her music (particularly on this album) is watching a boxing match that has a gospel choir soulfully chiming in between rounds. You get that hit of rap, often hard-hitting yet precise and well-trained; but there’s moments of mournful reflection that wash over you in-between. A lot of that is down to the tailor-made production from Sol Messiah that gives their collaborations this sense of raw spirituality that feels just as much African as it does American. It makes sense when you learn Sa-Roc’s background and passion for pan-Africanism, and it’s certainly helped see her garner some crossover success to worldwide audiences outside of your usual underground hip-hop fans. There’s an it-factor in Sa-Roc’s presence that extends further than the lyrical acrobatics and imposing cadence, and Sol Messiah knows that. He gets the best out of her throughout this record, something she’ll likely admit too. “GOD CMPLX” is an excellent demonstration of Sol Messiah’s versatility and ability, but also highlights why Sa-Roc is someone he places so much faith in. She’s the real God present here, no complex.