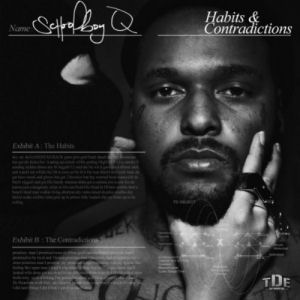 Let me introduce you to Quincy Matthew Hanley, better known as ScHoolboy Q. (The odd capitalization is in that first sentence is his preferred spelling, but a lowercased ScHoolboy Q also appears to be acceptable.) He's an army brat who was born in Frankfurt, Germany who eventually landed in Los Angeles and wound up a 52 Hoover Crip by his teens. Despite his gang-banging background, Q has matured into a self-described eclectic "Black Hippy" rap artist, and his GANG these days consists of Ab-Soul, Jay Rock and Kendrick Lamar. That's how I initially became aware of Q, as he and Lamar guest on each other's projects as much or more than Drake and Lil Wayne. The song that pushed me over the edge from "casually interested" to "keen observation" though was his anthemic "Hands on the Wheel" with A$AP Rocky:

ScHoolboy Q: "Life for me is just weed and brews
See the hoes flock to you when your name is Q
Am I overfaded? Hell yeah it's true
Turn a beat on ain't no limit on what I can do
[...] Too damn high, can't stand myself
I love drunk drivin, man I'm something else
Heat on my side, you're more than welcome to melt
I'm 'bout to finish a pound, you're more welcome to help"

A$AP Rocky: "Wait hold up, back in this motherfuckin bitch once again
It's the pretty motherfucker with a 40 ounce of brew
My nigga Q and we drunker than a bitch
We gettin Millers motherfucker yeah, uh
Nigga weed and brews, unbelieveable
Got a freak or two, in my vehicle
Got the purple drink, got the yellow drink
Then we mix it up, call it Pikachu"

There are three secrets to why this song is so addictive, but one has already been revealed - the production duo of Julian Nixon and Craig Balmoris a/k/a Best Kept Secret. The second is an oddly hypnotic hook which features folk singer Lissie doing a cover of the Kid Cudi song "Pursuit of Happiness." The third is the unapologetically reckless behavior of the protagonists, who cheerfully admit to drug abuse and drunk driving. It's so over-the-top that one can not actually take lines like "drunker than a bitch" seriously, so it actually achieves a cinematic Hollywood-like surreal feel. (Incidentally if you could take it seriously, one would have to arrest Q and take his keys away.) As one might expect Q keeps things close to his Black Hippy family and they feature prominently throughout the album. Jay Rock can be heard on "2 Raw," Ab-Soul is on "Druggys Wit Hoes Again" and Kendrick Lamar features on the Dave Free produced "Blessed":

ScHoolboy Q: "Nigga prayin up to God just hopin that he hear a nigga
I know the world got more problems
and it's much bigger, but I figured
I'd get some shit up off my chest
To all my niggaz I would die for
Load my pistol up, go out and war for
To all my niggaz that will never make it out the streets
Fuck it, keep going hard, don't let 'em see you weak
To all my niggaz first time stepping in the pen
Read a book and exercise, keep your spirit in
To all my niggaz that's gon' fuck around and die today
Take our hats off, bow our heads and let us pray"

Kendrick Lamar: "Don't stress
You was granted everything inside this planet
Anything you imagine, you possess my nigga
You reject these niggas that neglect your respect
for the progress of a baby step my nigga
Step, step my nigga, one, two, skip, skip
Back, back, look both ways, pull it off the hip
Blast at anybody say that you can't flip
this crack into rap music, every other zip/.zip
is a track, get used to it, get it off quick"

If you assume an artist with as much buzz as Q would have nothing but big names producing his album, you guessed wrong. He does have one (dope) track from The Alchemist called "My Homie" and one from Lex Luger featuring Curren$y titled "Grooveline Pt. 1" but that's it. Many of the songs come from his friends in Digi+Phonics, including the aforementioned Dave Free along with Sounwave, Willie B and Tae Beast. They can go from menacing melodies like "Raymond 1969" to mellow bass reverberating beats like "There He Go" in a heartbeat. The coolest of all their tracks may be "Gangsta In Designer (No Concept)," which sounds exactly like the parenthesis - just everybody hanging out in the studio until they came up with a cool tune.

That's the strength and weakness of Q actually. He professes to have not written his first verse until he was 16 and to not have taken his rap career seriously until being arrested at 21, but he's got a better sense of breath control and diction on the mic than many of his more experienced contemporaries. That being said Q doesn't have much of a theme on "Habits & Contradictions" except for the last word. You can never really get a sense of what Q is or what he wants to be: one minute he's making "Oxy Music," the next he's talking about people being jealous on "My Hatin' Joint," the next he's busy "Sexting" women over one of the weirder beats I've heard this year. I get that he's a "hippie" as such, but so is Kid Cudi, and since we're already mentioned him in this review I have to admit I'm impressed by how he organizes his songs like chapters in a book and lays them out on an album to tell a story. I'd like to know Q's story, but it's easier to find it on Wikipedia, and that's a problem. ScHoolboy Q's rap carer is just starting to take off, so I expect improvement going forward.