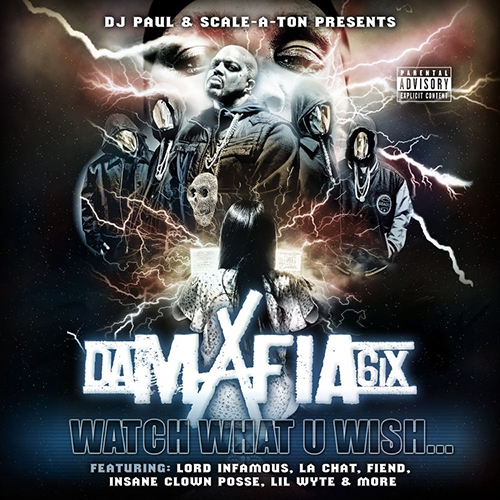 2013's "6ix Commandments mixtape, 2014's "Hear Sum Evil" mixtape and "Watch What U Wish..." represent the final possible attepts to unite Da Mafia 6ix. It was a "going back to our roots" attempt to bring together key members of Three 6 Mafia that were either in the group in the 1990's or joined in its earliest days. Unfortunately that line-up is no longer possible and not due to political reasons - Lord Infamous passed away in 2013 and Koopsta Knicca passed in 2015. There ARE political reasons as well. Gangsta Boo opted out of Da 6ix line-up at the earliest stages of the reformation, and even though original member Juicy J contributes guest appearances and is on good terms with everyone, he's not an official part of Da 6ix as he's concentrating on his solo career and Taylor Gang hustle.

I'm not saying there won't be another album by a group called Da Mafia 6ix at some point after "Watch What U Wish..." but I AM saying that it won't make much sense if there are less than six members in it, which was part and parcel of the whole reunion concept. Furthermore if Juicy J steps away from his solo career long enough to reunite with DJ Paul, you might as well call it Three 6 Mafia at that point. It's widely rumored that using Da Mafia 6ix as a name was an attempt to sidestep any contractual or label obligations that Paul or J might have under their more famous (and Grammy Award winning) name, which given how shady the music industry can be in general isn't hard to believe. The bottom line is that "Wish" is just as close as we can get to a Mafia reunion at this point - two people are dead, two people are gone by their own choice, and DJ Paul can throw any group of people together and put the word "Mafia" on it but it just won't be the same.

You might as well make the most of "Wish" if you're a Mafia fan, and at over 78 minutes long there's certainly no shotage of material to enjoy. Produced entirely by DJ Paul with assistance on selected tracks from Gezin, Hot Rod and TWhy, "Wish" has that classic Memphis crunk that the group originated and popularized far beyond their Southern locale. Newcomers will discover quickly what that means - hard hitting bass thump, menacing melodies, lots of synth and a generally malevolent atmosphere. You can't quite call it "horrorcore" but it's certainly a kindred spirit, which isn't so surprising really when you consider that the group's original name "Triple 6 Mafia" was dropped because the Satanic implication of 666 (hence "Three Six") was just too hard to market. Hell even their imprint "Scale-A-Ton" is a pun on the word "Skeleton." The point here is that the Mafia is completely unapologetic about their violence because life is hard, and as Knicca and Infamous both prove, it's often far too short. The latter appears posthumously on "Back on Dat Hype," which cleverly interpolate's Black Sabbath's "Iron Man" for its backdrop.

Infamous appears on quite a few of the tracks here thanks to sessions recorded before his untimely demise, including the album's first official single and video "Gimmi Back My Dope." DJ Paul lets you know where they are coming from as the chorus sets the tone for the song: "I ain't a +Cocaine Cowboy+, I'm an Indian giver." A few heads may be disappointed that the album version isn't the popular remix featuring Snootie Wild, but the beat and the substance are largely the same and it's that heavy DJ Paul thump that makes it work anyway. The album is sick with guest appearances anyway. Fiend appears on three tracks including the mind-altering anthem "Forever Get High," La Chat is on five tracks, and in what's either the strangest or greatest collaboration ever the Mafia go back to their "Tear Da Club Up" roots by combining with Lil Wyte and Insane Clown Posse to form a supergroup called The Killjoy Club for the song "Mosh Pit." The good news and the bad news about Da Mafia 6ix on "Watch What U Wish..." is one in the same - it sticks to the Mafia formula that made them a success for so many years. I wouldn't want DJ Paul to suddenly start doing AutoTune crooning, nor would I want him to abandon the grimy and brutal instrumentation that informs their sound, which makes songs like "We Be Goin' In" suitable for playing at high volume when driving through a residential area. This is "scare the suburbs" hip-hop and if it ain't broke then you sure as hell don't fix it, but by the same token none of the members of the 6ix are mistaken for being superb lyricists. Words are often one syllable and rhymes are often as basic as they can be, and if you're looking for clever punchlines or pop culture references forget it. They're much more likely to reference their own hits, and talk about tearing clubs up ad nauseum, and even though the dangers of syrup consumption are pretty evident at this point you won't find any apologies for using it or promoting it - not that I want or expect them. That's the best thing about songs like "Do Dabs" featuring Mariah Jane - they're just as new and up-to-date as the 6ix ever need to be - and not one single little bit more. (Here's a tip - "dabbing" isn't just a dance - and the fact the protagonist goes to Denver in the first verse is your other hint.) If you got some lean, po' it up for the Mafia. They stick to the script and give you exactly what you'd want on "Wish."