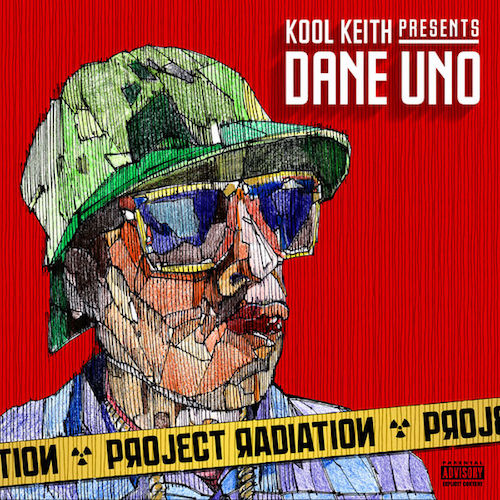 The fact that Kool Keith thought enough of Dane Uno to put a "presents" stamp on his album and release it through his home label of Junkadelic (at least that's where Keith and most of his friends drop these days) caught my eye. Now I can't say Keith's discretion when it comes to his own music is ideal. Some of Mr. Thornton's recent solo work filled with self-produced tracks that fit the definition of "vanity project," forcing even his hardcore fans to wonder if it needed to exit the studio and enter our ear canals. His labelmates generally fare better though and produce interesting work that's above the average in quality and listenability. That meant it was time to give Dane Uno a shot and see if he could produce something comparable to compadres like Marc Live or Mr. Sche a/k/a Big Sche Eastwood.

First a little background on Uno just so you know, and you'll just have to take it at face value since I have no way to cross reference the accuracy of his bio. Dane was "mentored by No I.D.'s right hand man Dug Infinite" coming up in Chicago and worked with both Kanye West and BOOGZ on a local radio favorite called "Game Changes." I tried hard to find that track but that search just brings you articles on "How Kanye West Changed The Game" and if you tweak it to get better results they all wind up being about Jayceon Taylor instead. Anyway it's safe to say he's from the Windy City and linked up with Keith at some point along the way, and Keith thought enough of him to cameo on "Filet Mignon" and "Jump Around In That Closet," producing the latter. It's worth noting that Keith's alias on the credits is Number One Producer, but this isn't a track those same critics Thornton hates will complain about much. The backdrop walks a fine line between trap, bounce and grime and it sounds just fine.

Even more interesting though is how Junkaz Lou and Dane Uno decided to update the Ice-T hip-hop classic "Colors," and he's definitely treading in the path of the original respectfully while still painting his own "Colors of Chicago" in 2016. Dane bemoans the violence of his city on the outro. "Yeah man! All they want to do is shoot man. All they want to do is buck man. Damn man! They ain't really rapping man!" I'm sure the leading drill rappers on the scene in Chi-Raq will disagree with him, but Uno is entitled to an opinion about what's going on where he's from like anybody else. Production is definitely one of the strengths of "Project Radiation." Fahim Allah sets Dane Uno up lovely on "How Can You Say That," and the indignation of Kanye's voice reacting to being misunderstood in sampled snippets fits the track perfectly. Songs are presented in a mixtape format where they blend into each other and as a result we move right into the Rob Smoov produced and starring "Underground," where he proclaims "Reagan gave America crack tutorial right on TV in the land of the free." The piano swagger of the instrumental and vocal swagger of Smoov make me want more and thankfully he has several more cameos -- "Came From Squalor" and "Street Reaction" among them. Smoov and Dane seem to be a naturally balanced tag team. The solo track where I think Dane Uno really nailed it besides "Colors of Chicago" is on the head-nodding "Yes I'm Ill" produced by Ocean Ave. It's not an overly complicated track lyrically, but what matters is how smoothly he flows to the beat and his belief in what he's spitting. "Dirty and down, influential to shorties around/seein this cat, fly again - honies I tap." It's a good slice of braggadocious rap that doesn't offend and establishes he has a strong enough ego to deal with the slings and arrows that will come his way as rapper striving to make his name. So long as Ocean Ave, Junkaz Lou or Rob Smoov are the ones backing him up on the boards the flows that our Raoul Duke looking protagonist spits are worth the time. Dane's own production doesn't quite work for me on "Rockin' My Dope" though. I know he's got mad love for Ice-T but I don't think this attempt at Bodycount's style works. There are some tracks where even the production doesn't quite save what's going on. Fahim Allah's instrumental for "Bra Bra Bra Brown" is fine but guest rapper Sharkula is all over the map in a way too reminiscent of Kool Keith's excesses. The biggest complaint I have about Dane Uno is that it's not clear what direction he wants to go in from this album/mixtape. Does he want to brag about his swag? Does he want to be a conscious rapper who wakes up the youth? Does he just want to flow non sequiturs like his mentor Keith? He does a little of each but he never settles into one and sticks with it. Dane Uno may be onto something though.