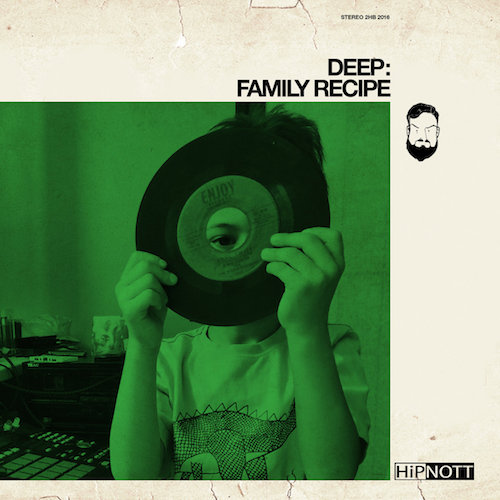 Once again I'm forced to recognize the danger of bias creeping in as this is now my third Deep review in less than one year's span. Maybe it's ill befitting a review to be so intimately honest with the readers, but in my philosophy if I'm thinking it then I have to assume you at home are thinking it as well. By necessity then this is going to be my last Deep OR 2 Hungry Bros. for the near future -- I'll say the rest of 2016 as a whole. If something else new drops between October and January 1st it's going to either be up to another member of staff to cover it or it just won't get done.

For those who haven't read any of the previous Deep reviews and aren't familiar with 2HB on the whole, let it suffice to say that these are beat tapes which showcase the versatile production skills that Deep brings to the table. In olden times this kind of release would have simply been a showcase of what a producer had to offer aspiring rappers, and as Mad Skillz one said, for the right price Deep can make yo' s--t tighter. In 2016 though beat tapes have become an end unto themselves with no prospective emcees required. The 2HB fam already have enough credentials that they don't have to worry about drumming up business (pun intended) anyway. Therefore Deep can drop an album like "Family Recipe" simply for the sake of showing off his skills. Call it the modern day "instrumental mixtape" if you like, only don't make the mistake of assuming it's given away for free on DatPiff or Spinrilla - you better pay for this one!

"Family Recipe" outworks both "What You Leave Behind" at 54:20 and "Bushwick Beatfeed" at 55:33 to become the meatiest cookbook full of recipes brother Deep has printed yet - a tome clocking in over 1 hour and 5 minutes chock full of 26 tracks. As Deep gets even deeper he continues to expand his repertoir from the U.S. to the former U.S.S.R. -- or perhaps to Latin America. "Sofrito" is as the name implies a spicy dish full of heavy piano keys to please the palate, while "Cilantro" is not muy famoso as a singer of the devil's cheese, unless that's a fondue to dip my aural bread in. It's a lively up tempo track that's as fresh and spicy as the herb it's named after. The funny thing to me is that you could buy any of these tracks individually for a dollar, but you'd end up spending $26 that way, or you could just buy the whole hour of music for $7. If you like even more than seven of the tracks on this album you'll want to make that investment, and it's not hard to find seven just off the top of my head. I'll drink down a "Mojito," get down with some sugar skulls on "Dia de los Muertos," chill out for a stylish "Lunch at the Wyndham," go to Arena Mexico "En La Lucha" for some wrestling, and if I feel the need to repent for drinking and sinning at the fights I'll turn on some "Amen Rock." With the tracks discussed in the last paragraph we're already up to our quota. I don't just worry about the danger of my reviews of Deep becoming repetitive though - I worry about the danger of his beats becoming repetitive just by churning out so many samples of how ill he is behind the boards. I guess it hasn't hurt Small Professor yet so I can probably stop worrying about it, and yet there are a few tracks here that (pun intended) just don't have as much flavor as I thought they would. "Cumino" has a solid loop to start out with but doesn't seem to build on it that much, and the breakdowns don't change it up enough to capture my interest. "Arcade Chicken" probably means something different from what I think, like a shopping plaza rather than a collection of video games, but it didn't stop me from looking for something there and not quite getting it. In fact chiptunes might be the order of the day for Deep just to interject more variety into his beat mixes. Still for every song that leaves me like "meh" there's something truly funky and head nodding like "Pelo Indio" and its repeated "dut dut dut dut" samples. If this is the last one for 2016 it's a good note to literally go out on.