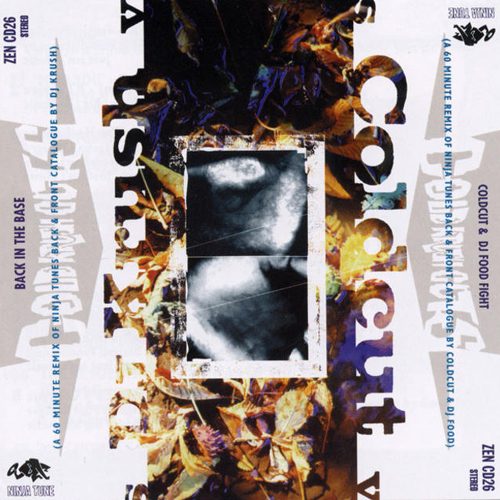 Back in the day, when the whole block would come out to party, who got the crowd hype? It was the DJ’s job. He threw on a couple records, let the funk ooze outta the speakers, and everybody was groovin, havin’ a good time. In recent times, it seems that the DJ’s role has been forgotten by some. This CD wants everyone to remember the DJ. A double CD set, collectively titled “Cold Krush Cuts,” features a CD by Coldcut and DJ Food, and also DJ Krush’s Back In The Base.

Coldcut’s CD is a balanced smorgasbord of cuts, ranging from the trippy, upbeat, slow, and just plain old neurotic. “Groover”, by Funki Porchini is a short cut that opens things up. A good opening track, with some nice scratching. Too bad it’s only 40 seconds long. 2 Player vs The Herbaliser provide “Sometimes”, which carries a laid back attitude for the entire song. “The Breaks” by DJ Vadim & Mark B has a really interesting concept to it. For parts of the song, it sounds as if there’s running water going in the background. Pretty realistic, it might have you checking your faucets. When the music stops, a man starts to talk. Kinda reminiscent of “Cool Like That” by the Digable Planets. Even the setting in that video is the picture you get in your mind while listening to this track.

With another something else running in the background, DJ Food’s “Spiral” makes you want to go in circles. It honestly sounds like a train running on the tracks, the train going full speed ahead, only stopping occasionally. Another vision that pops into the mind is being trapped underwater. That’s what happens with Funki Porcini’s “Going Down”, cause that’s exactly what it feels like. It’s as if you’re trapped underwater, and you’re slowly losing your life. Eerie. The drum-heavy “Mr. Chombee Has The Flaw” by The Herbaliser is one of those cuts you can just sit back and chill to. If Mr. Chombee has the flaw, this track’s definitely got the flow.

DJ Krush follows up with his CD, mainly influenced by hip-hop and jazz. Coldcut’s was more of an alternative CD, but Krush lays down a different flavor. A good example of the jazz style is on “40 Winks (No Sleep Vadim Mix)” by The Herbaliser. It’s got a steady beat, and doesn’t cause panic on your ears like other tracks. Where’s that panic at? Check “Aural Prostitution (DJ Cam Remix)” by DJ Vadim. This shit can’t be legal, can it? You’re bound to fuck up your ears somehow. Another nice cut comes from the London Funk Allstars, titled “Knee Deep In The Beats”, which shows a variety of different beats, from the London side of things.

If you’re a strict hip-hop head, skip this CD. But if you’re open to giving other flavors a listen, then check this one out. Coldcut’s CD is more experimental with other genres and is much more creative. Krush takes hip-hop and jazz and blends it quite nicely. This CD isn’t going to rock the whole world, but it’ll do some damage on a smaller level.