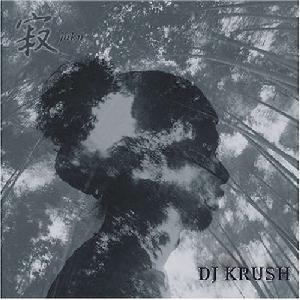 He was born Hideaki Ishii in his native Japan, but this cultural export from the land of the rising sun isn’t manga, video games, or Godzilla movies. As the aptly named DJ Krush though, he looms large on the global hip-hop scene. In the U.S. and Europe his following is comparable to RJD2 or DJ Shadow, where he’s known as a producer of beautiful beats that both expand and surpass the traditional boundaries of rap music. He’s happy working with the right kind of MC who can play off his surreal style, but like the aforementioned two he’s equally comfortable going it alone and letting the music speak for itself. What Krush brings to the table that his contemporaries don’t is his uniquely Japanese cultural heritage, meaning hip-hop beats can meet with koto notes and shakuhachi flutes. It’s a theme which Krush wields in careful measure, neither wanting to overwhelm audiences who have never heard the sakura music of cherry blossom festivals nor deny them the profoundly mysterious and beautiful sound of an ancient Asian culture.

West and East do not collide on DJ Krush’s “Jaku.” They meet like lovers in the night, not hesistant and uncertain, but familiar partners who know how to intertwine together in pleasing ways. This is evident on songs like “Nosferatu,” where even the normally listless Mr. Lif seems energized by the brooding beat and whistling background, or “Kill Switch” with Aesop Rock, with a heavy pulsating rhythm that even El-Producto would do a double take at. Rock as usual is both obtuse and engaging, eschewing rhyme structure at his convenience but still finding himself in time with the beat and flowing the words percolating through his head:

“Welcome to Sham City Limits, let your insects do the walkin
Let your indent through the shredder, let your instinct make it awkwards
If giddy in the gauntlets, set the phasers on kill
Cause the minions that want it ain’t offered the same pills
My chemical happy squad operate with freedom fighters
Eye of tiger pride, prize-fighter nighter off a Geiger”

Rap performances being somewhat few and far between throughout this hour long release, the production techniques used and sounds incorporated in the songs become the main focus of “Jaku.” Krush brings in musical guests as well as lyrical ones, enriching the album through their instrumentation. Shakuhachi player Shuuzan Morita stirs the soul on the opener “Still Island.” Piano player Ken Shima floats over the keys on “Stormy Cloud.” Shamisen player Shinichi Kinoshita can be found on the energetic and plucky “Slit of Cloud.” Even if these names aren’t familiar to you, rest assured they are heavyweights of traditional Japanese music, so their working over a hip-hop soundscape is both revolutionary and evolutionary on both sides of the Pacific. Fans of ambient sound won’t be dissapointed either, as Krush can go it solo on songs like “The Beginning” and “Distant Voices” more than effectively. “Pretense” and “Passage” show that his hip-hop roots are never far removed, as they place a strong emphasis on head-noddingly enjoyable beats and sounds. At the end of “Jaku” one has had an experience which unlike the merger of Jay-Z and R. Kelly truly CAN be called “The Best of Both Worlds.”