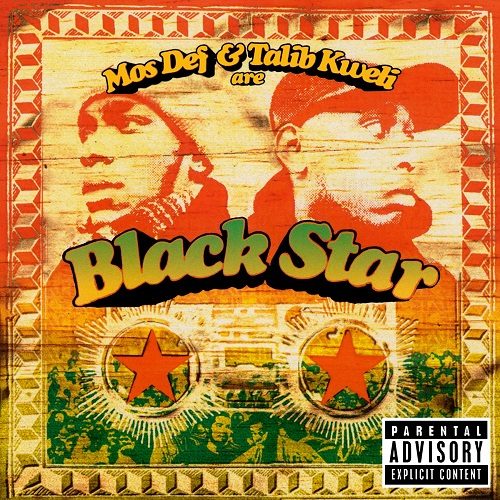 Mos Def & Talib Kweli are Black Star. The LP of these two talented emcees is nothing but golden. This is a statement from someone who went to three different record stores before she finally spend over $18.00 for the CD version of the album. Yes, I went to Best Buy, but they didn’t have it in yet or something, so I drove to the mall next where they didn’t have it, then all across town to F.Y.E., where they cheated me out of my hard earnings, but I didn’t care, because I finally had the damn CD. I bought OutKast’s Aquemini the same day, and I’ve still yet to listen to OutKast because I can’t keep Black Star out of my CD player. Or out of my car’s tape deck, because I recorded Black Star onto a tape the first day I got it.

So by the information above, one can assume that this is a good album. And it is. It’s a good, solid album with the majority of tracks dropping more knowledge in one minute than some of these over-hyped, over-paid, under- skilled rappers could ever display. Mos Def and Kweli come correct with lyrics as sweet as pie on tracks such as “Brown Skin Lady,” “K.O.S. (Determination),” “Respiration,” and “Thieves In the Night.” The lyrical strength of both emcees beat most of the opposition, and many of the beats fit the words like a glove. It’s easy to fall in love with Black Star, especially since they’re so different from most of the Hip-Hop alliances out there.

This is the first album that I’ve seen where the artists comment on each track, giving their own insight on their work. You really get a feel for who’s making all these sounds that are enticing your ear, and you gain an understanding of what Black Star is trying to convey, about where they’re coming from. Mos Def & Talib Kweli are Black Star is a very positive album and a refreshing change from “I’m-hardcore-so-won’t-you-be-my-whore?” and “me- an’-my-bitch-rollin’-in-my-Lex-poppin’-krystal-smokin’-my-blunts-with-money- all-around” rhymes that seem to saturate the radio airwaves, the music stores, the Billboard charts, and the mentalities of too many young and impressionable people in society. Albums such as the collaboration of Mos Def and Kweli will manifest thought into the minds of many of the conscious Hip-Hop community as well as counteract the negativity that’s endorsed by those rappers who are only interested in the dollar signs. “Separate the real from the lie, let me learn ya…”

The only track that I didn’t feel on the album was the last one, “Twice Inna Lifetime,” with Jane Doe, Wordsworth, and Punchline. The beat didn’t click on me, and Jane’s voice on the track had the same effect on me as nails over a chalkboard. Other than that, this album is a must-buy. Go now, and I hope you guys get it for cheaper than I did.