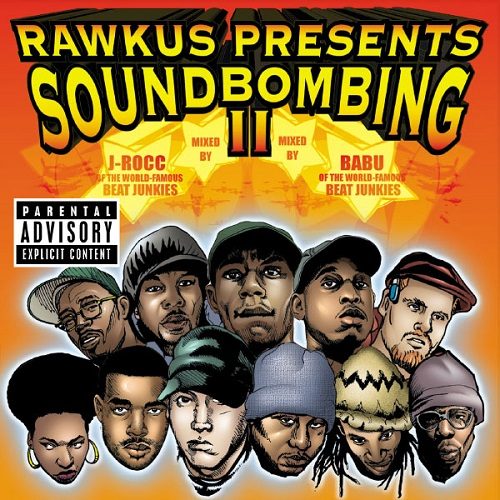 The first thing I thought as I picked up “Soundbombing II” is that, “This is already gonna be doper than the last one” Why? Because Evil Dee ain’t in the mix (c’mon kick it) every other five seconds. This time, J-Rocc and Babu of the world’s famous Beat Junkies is wreckin shit on the 1’s and 2’s. What these two do during the various intros and interludes (check Babu’s rhyme skills at the end of the album! ha ha!) is enough to send you scurrying back to the store to find the Beat Junkies albums, if you don’t got em already.

“Soundbombing II,” the second in Rawkus Records’ line of mixtape-like compilations, serves up a collection of underground emcees bringin serious heat over production by the likes of DJ Hi-Tek, Mr. Lee and others. Now, without further ado, lets get into the play by play. Not counting interludes and intros, of course.

“Any Man,” with a beat provided by the Beatminerz, showcases that nasal motherfucker Eminem as Eminem, not that Slim Shady character. If you’ve got that LP, this track is more of the same, and would have fit well on the album. Nice start to the show, followed by “B-Boy Document 99”.

This beat by Mighty Mi pings into your consciousness, thumpin and crackin all the way, as Mad Skillz, The High and Mighty and Mos Def drop gems all over it while DJ Sebb’s scratchin infects the cut. Mad Skills seems to have blown the spot wide open until Mr. Eon steps on the scene, droppin lines like, “Defeatin me is like Latrell chokin up John Thompson,” and referring to himself as Jedi Master Mace Windu.

Unbelievably, the beat morphs into something even funkier, as Lee Stone brings horn hits and noise to “WWIII”, the perfect background for Pharoahe Monch to show MC’s what mastery of the english language really sounds like. Shabaam Sahdeeq shows up and shines almost as bright, as the track forces you to cradle your head in your hands it’s so fuckin dope. Unfortunately, it doesn’t keep getting better and better, as the blend slides into “Stanley Kubrick” by RA the Rugged Man, a confused, jumbled mess of a song that sounds like what might have happened if Ghostface Killah had graduated from Harvard: disjointed, stream of consciousness bullshit that makes no sense at all, really. One of the few missteps on the entire album.

This mistake is made up for on Medina Green’s “Crosstown Beef,” where a story rhyme about different dramas unfolds over a loping, amiable beat produced by Posdnuos of De La Soul. The rhymes aren’t cliched or forced, but rather conversational. Mos Def, on his second of three appearances, shows his versatility on this track by weaving a compelling story. “7XL” promises to be tight when you read that Puba and Sadat X are teamed up on it. DJ Spinna sets down a laid back head knocker for a beat that makes good on the promise. Sir Menelik is like icing on the cake, as all three bounce off the beat effortlessly. “Chaos” slides in with a textured beat, with muted horns quietly stabbing at the drumbeat provided by DJ Hi-Tek. Bahamadia flexes her special brand of killin mc’s softly with her whispery monotone. The trade off between Reflection Eternal and Bahamadia is pulled off lovely, as Talib Kweli drops his own quiet threats: “Take that bass out your voice, you speak to me in treble”

“Soundbombin” is an interlude that’s longer than the track that follows it, “Brooklyn Hard Rock” the interlude, featuring Dilated Peoples and Tash from the Likwit Crew, has a rugged stripped down beat that knocks slow so every snare slaps your brainwaves silly. Dilated comes rough, but you KNOW Tash is gonna come rougher, and he does. When “Brooklyn Hard Rock” starts up with it’s jazzy undertones, you think you know where it’s goin. That’s when Thirstin Howl III comes on shouting in his crazy voice, yelling lines like, “My rhymes do to your brain what bullets do to flesh”….nuff said. “Brooklyn…” clocks in at a minute and change, short and to the point.

Then building on that, “Mayor” is Monch’s solo shot on this album, a creepy visual story about Monch’s assasination of a city official for personal reasons. While not as good overall as his verses on “WWIII” it still smashes the majority of product out right now. But once again, there is a letdown after Monch drops his shit, as Company Flow’s “Patriotism” comes on. Unfortunately, The Beat Junkies do more in their intro to the song than El-P does over the whole thing. His flow is really rushed, like he’s got too much shit to fit into his verses at one time, on top of it being disjointed and (dare I say) almost rhythmless. Not as bad as Silkk the Shockers rhythmlessness, but still pretty bad. He drops one liners like “My favorite flavor of gas is Mustard” but they aren’t workin, really. I mean, who tastes gas on the regular anyway. Sure, that might be nitpicking, but it shows how this song is peiced together instead of a cohesive whole. it sounds like shit was crammed in because it sounded cool as opposed to fitting in easily. Mild disappointment, saved by the fact that the hook and the beat are type nice.

“1-9-9-9”, the lead single off the album, shows that Hi Tek, who has blessed his fair share of beats on the album, hasn’t failed yet. The chiming, midtempo beat rides nicely for Common to drop some introspective, questioning lines (did you expect anything less?) in the first verse, to good effect. Sadat X comes on and improves on his verse in “7XL”, and then Common comes back on some lyrical shit to close the song out, with freestyle lines like “In battles I’m Warren, like a G child”

“When it Pours, it Rains,” by Diamond, is adequate at best. Not dope or wack, just kinda in that middle ground. “Next Universe” is Mos Def’s third appearance, and with his solo shot, he comes amped. With the crazy beat by Hi Tek (again!) Def has a tight, tight blend of old school feel with new school skills that shines. “Every Rhyme I Write,” starring the Cocoa Brov…..nah, fuck that, I gotta call em Smif and Wessun, co-starring Shabaam Sahdeeq follows next. It’s two great tastes that taste great together, especially over a razor sharp beat by Nick Wiz. Smif and Wessun aint represented this lovely since…well, since they were last called Smif and Wessun. The album gets closed out by Reflection Eternal’s “On Mission” which ends the album in respectable fashion.

Overall, this is one for the ride, the cd player at home, and the walkman on your way to work or school. So far, every other compilation out there pales in comparison. While there are a few speed bumps scattered on the album, when it’s good, it’s really fuckin good. The lyrics are some of the best to come out in the 99, and the beats are that neck crackin shit that your spinal cord loves. It’s improved on the original, a tough feat to do these days. Go get it.