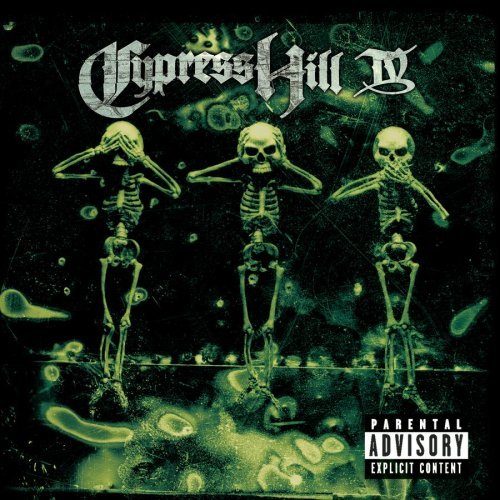 Near the end of “Cypress Hill IV,” on the song called Clash of the titans, B-real lets it be known that there will be no more sleepin on the crew from the Killa Hill. Over a beat you could go to war with, B-Real spits out:

“Let the rain pour down from God above/With the blood on my blade, no love, begin the flood/ Open the gates, Let the battle begin, we’re in/With the wind at our backs, ready for any attacks”

That seems to be the underlying theme of the latest offering from Cypress Hill, “Cypress Hill IV” The beats are cinematic and moody, and B-Real sounds actually, well, threatening on a majority of the songs (well, as threatening as a nasal voice can sound) On top of that, Sen Dog is back for this album, and his game has stepped up a notch or two, actually shining on a couple cuts lyrically instead of just barking the choruses.

The first half of the album is definite satisfaction if you dug the first and second albums. “Eye of the Pig” is basically an audio version of the Harvey Keitel flick “Bad Lieutenant.” But the jack is well done, as B-real evokes a mood of paranoia, fear and self loathing as a dirty cop on the beat. “Eye..” is followed up with “Checkmate.” Sen Dog is heard muttering over the beginning, “Beware of the Dog, muthafuckas” and then the beat drops, pounding the shit outta you. Muggs brings back some late 1991, early ’92 flavor with this track, hyper and uptempo. Sen comes off best on this track, lyrically, and you can’t help but get a little juiced hearing him bellow “Checkmate, fool!” in the chorus.

“Riotstarter,” and “Nothin to Lose” follow the same path as checkmate, agressive, fast songs, spiked with a touch of electric guitar here and there. Muggs comes close to resurrecting the aura of the early Bomb Squad on these cuts. “Tequila Sunrise,” the albums first single, is a smooth little chunk of latin flave, got the horns on the chorus and everything. It sounds kinda like something Muggs produced up for Delinquent Habits then decided, “Nah, fuck that, we gonna keep this one.”

And of course, there are the obligatory weed love songs, “Dr. Greenthumb,” and “High Times,” While “High Times,” is lethargic and pretty blah blah, “Dr. Greenthumb” has a dusty beat, and a funny intro, complete with a crop growin redneck sayin lines like, “Now I don’t gotta point my shotgun at no pesky porkers. Dr. Greenthumb, yer thuh sheeit” as you hear the tobacco juice drip down his double chin.

There’s more guest spots on this album than the previous ones, following the latest trend of shoving as many guest MC’s as possible on your album. (Make it stop! Make it stooooop!!) But these are (thankfully) limited to some youngbucks from the Cypress camp,(Barron Ricks and Chace Infinite) and one washed up G-rapper (MC Eiht).

Barron Ricks makes his first appearance on the slowtempo “Audio X” He and B-real kinda sound lke those other platinum potheads, you know, the ones from Cleveland, Ohio? B-Real even admits as much, saying, “Give me any record and I’ll flip it any style” Barron sounds kinda like Prodigy from Mobb Deep, but with more of a battle tinge. It’s cool at first, but he kinda wears himself out by doin the same shit on all the tracks he’s present on.

Chace comes tight on “Feature Presentation,” outshinin Barron and damn near runnin B-Real off his own cut as he rides Muggs’ sinister beat (They’re all pretty sinister sounding, actually) MC Eiht drops his verse over “Prelude to a Come Up” sounding more like his old self instead of doin that God-awful stop-start rhyme style he had adopted for his last two pathetic albums. This verse is actually adequate, and give me hope that I’ll be hearin him sayin his trademark “Geeeeah” over some good shit soon.

The one track that raised my eyebrows a lil bit was “I Remember That Freak Bitch,” The fonky ass beat had my head noddin, Barron was droppin some smart-ass lines that had me smilin’ but hearin B-real rap about an old girlfriend aroused my curiosity. With lines like, “She wanted to be a star,” and talkin about his girl “With the electric eyes,” I was wonderin if he was talkin about a particular plastic barbie doll Baywatch bimbo. Hmmmm…Regardless, it’s another pretty good cut.

There are a few missteps, however. “Steel Magnolias,” and “Dead Men Tell no Tales” are pretty fuckin blah blah blah, and “Interlude pt. II” has an okay beat, but nothin but the usual complainin and bitchin (fuck you haters, you critics are bitches, quit bitin our shit) go on top of the beat. The second half of the album sags a bit, mired in a slowdown, but a enough one liners and little tweaks in the beat keep you interested enough to let the shit play on. But avoid the last cut entirely. “Lightning Strikes” is some bullshit techno/rock cut that goes absolutely nowhere, and is completely unredeemable. I’m guessing it’s on there to appease Sen Dog’s rock sensibilities, and to please the stoner kids who worship Cypress but like to throw a little Prodigy and Metallica into their mix. Even they probably ain’t gonna dig this little nugget of shit.

Basically, Muggs is near the top of his game. The distorted vocals, the grainy, dusty, but thick ass beats set an angry and apprehensive mood. Muggs is still one of the most underrated producers in the industry, and he rarely fails at delivering dope shit(Checkout his “Soul Assasins” LP if you haven’t already) And B-Real is at his best lyrically on this album, painting pictures in your weed clouded mind, or just telling you what the fuck is going on in his part of the Hill. Sen Dog is back with a vengeance, and Cypress is a better group for it. I know they ain’t left, but I’m callin it a comeback. They came back to the raw shit they left behind on their debut and to a lesser extent, their second album. Load your bong and hit play.