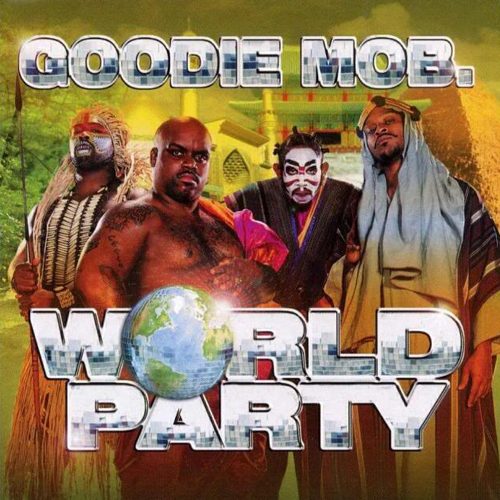 Do you want to “Get Rich to This?” Then you bought the wrong album. This album has almost nothing to do with the lead single; which was not only a bad choice to represent one of A-T-L’s finest groups but was perhaps the single biggest mistake they’ve ever made musically.

Now that we have that out of the way, let’s discuss what’s left. “World Party” is eleven other songs of some typically boombastic Organized Noise style production on which the four man collabo’ of T-Mo, Gipp, Khujo and Cee-Lo funk their way through the Dirty South. Goodie Mob is as eclectic as they are emphatic. The snappy breezy feel of songs like “World Party” and “The Dip” are meant to shake rumps; while the braggadocious “Chain Swang” and “All A’s” will get make points with the hot boyz and stunna’s riding hard worldwide.

The most surprising song is their collaboration with fellow LaFace artists TLC on “What it Ain’t (Ghetto Enuff)” which works as an uptempo hip-hop track but probably +is+ Ghetto Enuff that it won’t crossover on the Donell Jones slash Sisqo oriented urban radio stations like KISS-FM or WJLB Detroit. So why do it? Like “Get Rich to This” it seems like an ill conceived idea to curry favor with current trends in black music pop culture.

The G. Mob works best when they stick to the Southern flavors which made them popular for both an afro-concious resurgence and a thick chunky “Soul Food” funk style. The bounce bass of “I.C.U.” exemplies both, as does the strings laced beat of “Rebuilding”. Cee-Lo sings the hook to perfection: “My home can use a little rebuilding/a better place for these ghetto children [..] these walls gon’ come, tumbling down.” That’s what we expect to hear from a crew whose name means “The Good Die Mostly Over Bullshit.”

Rounded out nicely by the vibes of “Just Do It”, the cautionary tale “Street Corner”, the female ode of “Cutty Buddy” and the heavy pounding bass of “Fie Fie Delish,” this Southern-style “World Party” ain’t nothing to shake a stick at. This album may go down as the group’s sleeper hit considering it was mis-promoted and mis-represented, but don’t make the same mistake this reviewer did. Like always, the Goodie Mob are ghettofabulous!