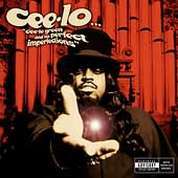 Cee-Lo Green and His Perfect Imperfections

Life’s not a game to Cee-Lo Green, but that doesn’t mean you can’t play too. Perhaps this explains the contradiction of the fact this rapper shares his name with a game of dice immortalized by Kool G. Rap on his album “4, 5, 6” – the best possible combination you can roll. If Cee-Lo is a roller though, he’s a HOLY roller; betting you’ll gamble on his funky mixture of spirituality, funk, singing, and straight up hip-hop.

For those already familiar with his past track record, this seems like sure money. Having captained the Goodie Mob through the ups and downs of three albums in the last ten years, the group’s most popular and recognizable member now strikes out as a soloist for the first time. Last year’s “Sexual Chocolate” off the “Violator V2.0” compilation was a teaser which had a digitally manipulated Cee-Lo speed-rapping about the joys of getting your groove on. Although he slowed it down a little for “Closet Freak” on his “Perfect Imperfections” LP, he didn’t turn down the heat at all. Sing-rapping in a style Nelly made national but imperfect Cee-Lo made perfect, this song is an ode to letting it ALL hang out and basically being yourself:

“Now everybody that’s grown got skeleton bones they got hidden away
Yes y’all there’s a freak in us all, yet some choose not to say
You can’t let those who ain’t yet, make you they lil’ ball of clay
Be free and express yourself, nastiness comes naturally
Listen to me now
It could be the way I wanna freak a song, tattoos, or the way I dress
Or it could be; I wanna walk my way and refusin to follow the rest
Or when people haven’t been where you been and they say you still goin too far
Or when you wit ya girl and pull over and fuck somethin in the back of the car”

Defying the odds that self-produced rappers often fail to make their own shit hot, “Closet Freak” contains all the musical elements of a huge hit: swinging bass, a catchy sing-a-long hook, stabs of the horny horns and even pianos punctuating his lines. Far from being a fluke, this sound is representative of Cee-Lo’s production style. Rappers have often borrowed from the soulful sounds of the 70’s to punch up their hits, but Cee-Lo for the most part prefers to create his own P-Funk. “El Dorado Sunrise (Super Chicken)” is the perfect example: horns by Kebbie Williams and Russell Gunn, guitar by Carlos Glover, bass and organ by Charles Pettaway. Give it up to the C-Funk; they deserve as much credit for making this album thump and bump as the lead vocalist does himself.

Haters are probably looking for an opportunity to knock this shit down a peg or two and they’ll insist that “Cee-Lo is a damn rapper and don’t have no business singin’.” As he says on “One For the Road” though, “relax, it’s okay, and ride out.” Doubters have to admit that this song proves that Cee-Lo still cares about his rhymes, written not just to bling bling but to reveal his inner spirit and expand your consciousness:

“I have milleniums of material and rivers of rhythm
An entire ocean of emotion that’s enlightened to swim in
Also a forest of feeling beating paths of peace
Trapped inside my sihlouette I have to speak to release
Demanding – more from the pen, than a whore from the pen
The line between playin to win, and sin is thin
But I, walk it with grace and I talk it with taste
I am that raw, simply put, and I rest my case”

The strangest that things get on this album may be his duet with John Popper on “Country Love.” Yes, that John Popper – the man of large girth and funky harmonica who sings for Blues Traveller. Well, why not? Hip-Hop tends to look down on this instrument far too much; some people have even argued that putting it in rap songs is “coonish.” Those who think so should take their argument up with either of these men: the brother sings, the white soul bro blows, and there’s not a damn thing wrong with either one of them. This is some Southern summertime soul, perfect for sipping on a Lynchburg Lemonade to.

Cee-Lo’s success is that in showing us his “Perfect Imperfections” he’s not afraid to be openly contradictory. On a skit, he’ll pose the spiritual question, “What would Jesus do?” even though he’s not afraid to say, “I’m bad, I’m bad, I’m bad I know I’m bad God damnit” on the song “Bad mutha.” Take a page from Run-D.M.C.’s history though – this is not bad meaning bad but bad meaning GOOD! Try to defy the pure funk this album exudes and you’ll fail, because from the slow sexy stylings of “Spend the Night in Your Mind” to the uptempo keys of the spiritual “Gettin’ Grown” to the rock’n’roll tweak within “Under Tha Influence (Follow Me)” it’s all good in Cee-Lo’s hood. By openly defying an attempt to be pigeonholed as just a rapper or just a singer, as just a thug or as just a righteous man, Cee-Lo Green gives an eclectic performance that is the best of ALL worlds. For the open-minded and the musically adventureous, hop on board for a ride with “Cee-Lo Green and His Perfect Imperfections” and enjoy the trip.