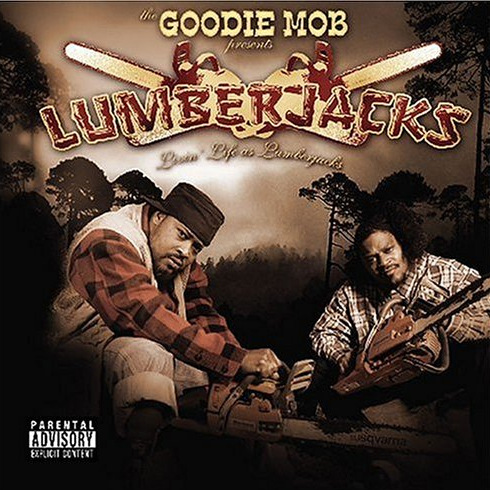 Actual and factual information for your eyeballs – the exact title of this album is “The Goodie Mob PRESENTS The Lumberjacks – Livin’ Life as Lumberjacks.” Even that seems debatable though. While the cover art and CD I received both say “Livin’ Life as Lumberjacks,” the press release for the CD and the listings at online retail outlets say “Livin’ Life LIKE Lumberjacks.” If that was the original title, one should be grateful it got scrapped, because that was just a little TOO much alliteration. Of course the important question here isn’t what the real title is. The important question would be “Who the hell are the Lumberjacks and why is Goodie Mob presenting them?”

It’s a bit misleading to say that Goodie Mob presents the Lumberjacks. For all intents and purposes, Goodie Mob ARE the Lumberjacks, and vice versa. Khujo and T-Mo Goodie are the only two members of the original Goodie Mob group left now, with Cee-Lo being the first absent on “One Monkey Don’t Stop No Show.” It wasn’t too surprising that he broke camp considering his success as a solo artist, but it’s a bit more shocking that Big Gipp would strike out on his own, given his own solo “Mutant Mindframe” was a decidedly mixed bag at best. Now whittled down to two remaining MC’s, it would have been kind of hard for Khujo and T-Mo to call their rap group a “mob” by any stretch of the imagination. Instead both artists decided to go back to their roots, to the days before Goodie Mob was even formed or blew up, to when they used to be seen broke budget ballin’ in the studio wearing flannel shirts to keep warm. While “living life like lumberjacks” may have been their own personal joke while penning songs and trying to get put on, today it’s a full-fledged album T-Mo describes as “12 years in the making.”

Goodie Mob was always known for their chemistry on records, and it’s clear from listening to “Livin’ Life as Lumberjacks” just how integral Khujo and T-Mo were to the integrity of that sound. Khujo is the one who gives these Lumberjacks their somber serious side vocally and lyrically, while T-Mo is the more surreal participant, drawing the broad picture and letting his higher tone punctuate the topic matter. The Organized Noize produced “They Comin’ Man” illustrates this perfectly:

Khujo: “Grab yo’ gas masks, duct tape and plas-tic
Orange alert, black helicopters gettin dras-tic
The casualties of war, will go ignored
Our spirit and our minds, is what we fightin for
Deliverance is near, have no fear
Man is a liar but God’s word is crystal clear
So be, not dismayed by the signs”

T-Mo: “I see you scared of the truth, scared of the word
that you heard, scared of what the world might learn
Fuck a perm, I let my shit nap up or dread
Cause I won’t adapt, to what society said
I rap until I’m dead, I want everything that life has to offer
So many women to toss up”

Goodie Mob was also known for their socially conscious Southern hip-hop. While they never traded being funky for being preachy, songs from “Cell Therapy” to “Black Ice” and “Beautiful Skin” stirred your hip-hop soul at the same time the words percolated in your brain, making you think about things more profound than the next great beat or rhyme. It’s actually rather remarkable that both Goodie Mob and OutKast managed to get over on this basis, which had as much to do with the strength of their personalities on the beats as it did the many dope Organized Noize beats they ended up rhyming over. The Sleepy produced “Black History” follows in this tradition, right down to not being afraid to generate a little controversy in the process:

Khujo: “A month set aside, for us to research our culture
But lil’ white lies pick our bones out like vultures
Scavengers hold the truth and no righteousness
How could you say, that we came from monkeys?
When the first man was made from the dust of the Earth
Christ was a black man, I know the truth hurts
But guaranteed to set you mentally free
[…]
April 1st, is when the New Year begins
March 31st is where it ends
Who gave the Pope power to forgive man of his sins?
America most wanted becomes on my skin
Don’t eat fish unless it has scales and fins
My folk was sold, by you Africans
as slaves in the 1600 by Europeans
Beware of blue eyes and black grins”

T-Mo: “Put it together, the shortest month is February
But I was born on the second day
Along with many other influential leaders
that are recognized for their many efforts
on the second month, of the year
I see racism clearer than ever, just take a look in the mirror
It’s like we suffer similar to Jesus
The chosen people crucified for bein black”

I’d be more than happy to say shrinking the group from four members to two and changing their name from Goodie Mob to The Lumberjacks was an unqualified success. I’d be happy to say that, but I can’t. For the moments of brilliance that the Lumberjacks do show, which proves that they are entirely cut out to rap on their own, there are other times when the album seems to wander along without a purpose. “Murder Madness Music” works due to the Organized Noize beat, but is a little heavy on depressingly serious verbiage and biblical prophecy even for Khujo. “Turn Your Whip” is the obligatory crossover Southern track, complete with big horns and Lil Jon style beats, but it all feels incredibly forced and has none of Goodie Mob’s formerly natural crunkness. It’s still good by comparison to “Puttin’ On2Nite” though, which has all the problems of the prior track times two. There’s still plenty to like though, like “Git High” featuring Witchdoctor and Peaches, “Superfriends” or “24/7/365” where they reunite with Big Gipp, and the successful musical experimentation of “Hillbillies” and “Lock N Load.” The beats tend to carry the rhymes when T-Mo and Khujo run out of gas and vice versa, but unfortunately that means things are only working on all four cylinders half the time. Still if you’re a Goodie Mob fan, you’d be hard pressed not to cop “Livin’ Life as Lumberjacks.” Whether they can cut it as a duo in the long run remains to be seen, but for now they’ll chop down enough trees to stay warm in the winter.