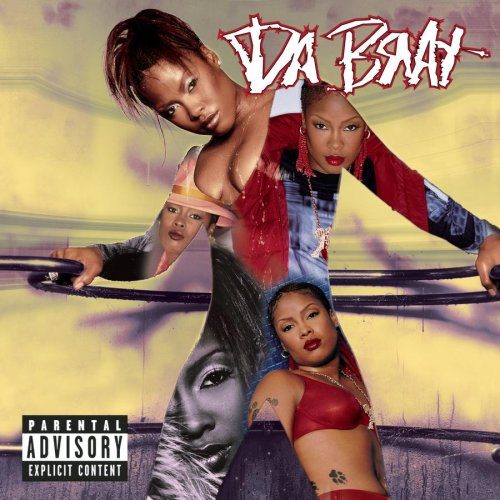 Representin for the six-oh-six-fo’-fo’, Chicago’s quick tongued rap terror who lately has gotten more press for her fly dresses than her fly raps has decided to throw weight down and put her game AND her city back on the map with “Unrestricted”.

“Intro” is definitely a step in the right direction – the high speed duet with fellow zip code native Twista and drastic high powered indictment of “you BITCHES” by Millie Jackson show that she’s not afraid to blow up the spot. “We Ready” is musically harmonious (obviously a Jermaine Dupri track) and lyrically hilarious as she describes her extra loud car stereo and how she avoids getting a ticket with her feminine charms. You can’t front on the fact Da Brat has positioned herself to be the female who is hardcore as fuck with crossover beats to move her on the pop charts.. but still sounds better hittin straight up hard.

“What ‘Chu Like” with Tyrese may be the ultimate example – a song which is undoubtedly going to make waves on the Billboard Rap Charts and urban radio formats. For me though as nice as it is, I’d rather skip right past it to “Fuck You” when she disses bums who can’t take their eyes off her ta-ta’s or their jealous girlfriends. It gets harder on the “Holla Holla”-esque “Back Up” which (no surprise) features Ja Rule and the bounce beat influenced strings laced “Hands in the Air” with Mystikal. Da Brat really is at her best when she’s swinging straight for the head and spitting the kind of shit she made her trademark on Missy’s “Sock it 2 Me.”

“Runnin’ Out of Time” is one of the few serious missteps as far as I’m concerned. It’s not so much a wack track at all since Da Brat is spitting with fire, but Kelly Price doesn’t really move me and the song breaks up the flow that “Hands in the Air” started which could have otherwise lead directly into her rowdy first single, “That’s What I’m Looking For.” These are the kind of songs where Da Brat shines with an appealing stutter style flow and the kind of ruggedness that Jermaine Dupri’s record label lacks without her. She follows it up with the guest appearance of her vanity label’s artist 22 on “Breeve On Em” and he actually comes off nice; as sort of a Twista Jr.

Next up on the album isthe slower (again oriented for pop and club) “What’s On Ya Mind” with LaTocha Scott and Trey Lorenz – a track which I really have no interest in – and “High Come Down” with the same guests but much more uptempo energy – similar to her “Party Continues” duet with Jermaine Dupri. “All My Bitches” and “Pink Lemonade” flip the opposite but related styles of Da Brat: the former at her most vicious and the latter at her strangely seductive thuggery. By closing with “Chi-Town” she keeps her loyalties in her heart and may have unintentionally shot a dart at Common for heading to the greener pastures of New York City when she says “city with the best skyline [..] some hate but they still come through.” If I was her I wouldn’t abandon the Windy City either – even when it playa hates on it’s own it still creates great hip-hop art and artists. Brat continues to represent the cream of the Midwest but always ends up coming off better when she goes for the throat instead of going for the charts.