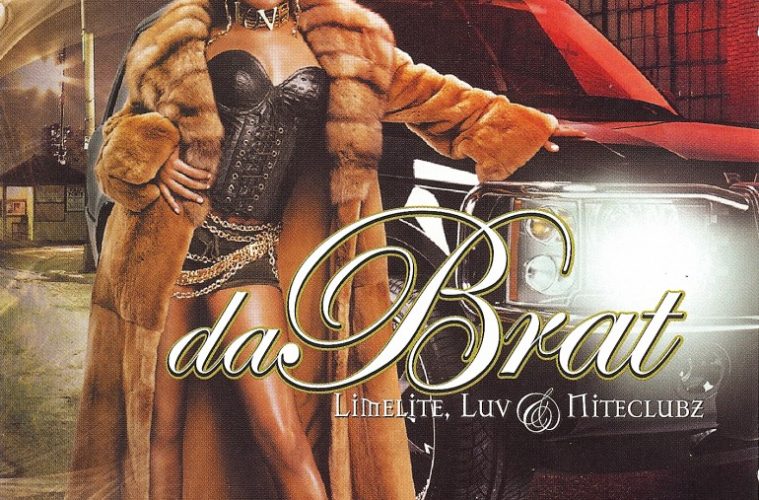 Da Brat-Tat-Tat-Tat. Rocking microphones since 1994, this gangstress of hip-hop has had a lot of obstacles to overcome. Due to her close association with Jermaine Dupri and several cameos with Kris-Kross, her name (and appearance) seemed all too apt for those who took her lightly. Then as her style and appearance matured, those same rap fans were stunned when she showed off a gorgeous physique – which became yet another reason to hate. Oh, she’s not a thug bitch any more, she done crossed over. No amount of haterism could stop her from consistantly dropping hits though, right up to 2000’s “Unrestricted” album. “That’s What I’m Looking For” kept the hardcore happy, and “What’Chu Like” smoothed it out for the rest.

Where’s Da Brat been though? A scan of her 2001 resume mentions the film “Glitter,” but few people remember this Mariah Carey flop and even fewer still care. She also cameoed on Lil’ Bow Wow’s second album, on the song “Crazy.” That’s it. Her few miniscule appearances really didn’t raise her profile on a national level, so she’s basically been off the map for over three years. In the entertainment world that’s a long time, and in the fickle hip-hop world that’s a lifetime. Da Brat’s “Limelite, Luv & Niteclubz” is therefore required to leap two high hurdles: reintroduce the old fans to her all over again, and simultaneously draw a new audience that doesn’t know her or her legacy in rap music.

“In Love Wit Chu” was undoubtedly designed to do just that. R&B newcomers Cherish provide good vocal support, and the co-produced beat by Da Brat and L.T. Hutton is sugary sweet. Actually, a little too sweet. Pam Grier proved long ago you could look sexy and still kick ass, and on “Unrestricted” Da Brat walked that fine line pretty well – this single doesn’t. For those who like ballads to lovers and significant others, this single is for you. Others may find lines like, “Ain’t nothin I won’t do for my baby, you drive me crazy and you make me say OOOOOOOOOOH, I’m in love I’m in love I’m in love I’m in love wit’ chu” to be grossly overwhelming. As if listeners didn’t already get the point that she was crazy in love, Da Brat tells us in the outro that “you without me, is like Astroturf without the baseball field, ha, I mean the football field.” Also, she and her lover go together “like white on rice.” One can honestly believe she is head over heels about her man, because only someone that whacked out would believe such advertisements of affection aren’t, quite frankly, absurd.

Da Brat’s hardcore image was in serious jeapordy after this shamelessly over-the-top love letter, and songs like “World Premier” do help address it. Two problems though: Jermaine Dupri’s beat borders on monotonous, and whenever you have M.O.P. as your guests they’re ALWAYS going to outshine you. These Brownsville killers put the C in charisma, clips, and cutthroat lyrics. Billy Danze takes no shorts:

“We a whole different breed of men, you need to squeeze us in
We’ll get in where we fit in like BUK-BUK-BUK-BUK-BUK-BUK-BUK-BUK
Still rockin what’s poppin, you still lookin shooken
We a long way from the day when you overlook Brooklyn
It’s like lotto Duke the way we represent it
You really gotta be in it to present, you get it?
We God!!”

The album seems to swing back and forth between these extremes of hip-hop hardcore and softcore sultry smooth. And when Da Brat goes smooth, she either gets corny or gross. “Ain’t Got Time to Waste” managed to be both. “I’m individually wrapped like a fresh Twinkie; so if I cream in the middle nigga licky licky licky licky – become Spongebob, absorb me up.” Ugh, that’s nasty. “Gotta Thing For You” is a little better thanks to Mariah Carey, although she becomes the umpteen millionth rapper to crib from The Pharcyde’s “Passin’ Me By” in her rap (and it’s a damn shame how few people know the original). “Who I Am” restores her gangster, but again Dupri’s beat seems surprisingly lackluster for such a well known rap music icon; and again she’s cribbing from older rap hits – this time it’s MC Lyte’s “Cha Cha Cha” in her chorus. “Boom” is the first song on the album that really epitomizes Da Brat’s personality to a tee. Spitting quickly over another co-produced L.T. Hutton beat, she raps shamelessly about stealing hot men from rival females:

“I was being so flirtatious with the body language
I was so anxious to make those arrangements
Tangle him up in the sheets
Transaction bout to happen, it’s time that we meet
I put one, foot, in front of the other – stopped
Looked at the back of my nameplate in the mirror
Gotta make sure my lipstick straight, and not smeared
It’s clear, he want me, severely
So I slid over up to his ear and whispered it gently
(Fuck me! Fuck me! Fuck me!)”

That’s Da Brat at her best – a little raunchy, a little nasty, and capable of dropping dexterity in her flow that would impress Twista. This middle part of the album is Da Brat’s best work – the appropriately named Dupri produced “Got it Poppin'” (it practically screams remix with E-40), the funkalicious “Chuch” with hip-hop superfreak Cee-Lo, and “Get Somebody” featuring Keisha Jackson. The latter is a treat for this album, as it showcases urban radio potential without being corny or saccahrin sweet. “I Was the One” with Anthony Hamilton tries to achieve this result too, but is slightly over the top, although not to the extremes of “In Love Wit Chu.”

“Gushy Wushy” is a confusing closer to this album. It’s got a ridiculous title, some cribbed lines from LL Cool J’s “I’m Bad,” and still manages to be somewhat dope anyway. In a way though it exemplifies the problem with “Limelite, Luv & Niteclubz” though. Da Brat is a highly talented rap artist, has a decade of credibility under her belt, and yet after a three year hiatus hasn’t really come back with anything to restore herself to the limelight she wants to be embraced by. Don’t call it a comeback.