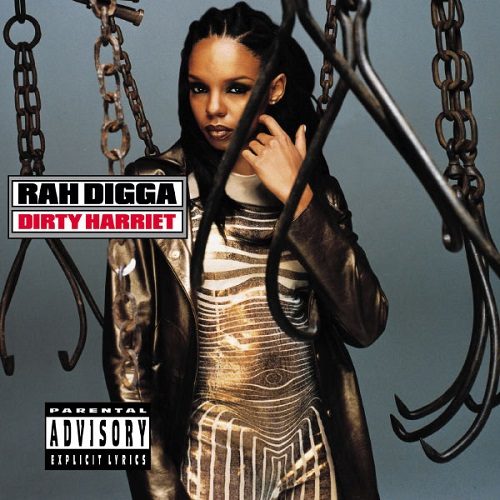 Having already blazed a wide swath of name recognition across the face of hip-hop with high profile affiliations with the Outsidaz AND Flipmode Squad, Rah Digga was a stick of C4 just waiting for primer and a timer. Enter “Dirty Harriet” and peep game because after long dues in underground rap since appearing on The Fugees “Cowboys” she is SERIOUSLY ready to blow.

The self-proclaimed “Harriet Thugman” of hip-hop may be the only female rapper in 2000 who can honestly claim a title that MC Lyte gave up more than six years ago. In that interim hip-hop has seen every clique represent with at least one token female and the rap charts resonate with wannabe contenders who thought they could punch their way into the ranks of hip-hop’s baddest bitchdom (sorry Trina, you’re not even a contender). We all remember the TRUE hardrock though. Lyte was the first female who wasn’t “havin it,” the lady who’d smack you with a “10% Dis” and tell you your game was “Paper Thin.” The fact Flipmode Squad had a hit called “Cha Cha Cha” is no coincidence.

Rah Digga is the true heir to the throne, the contender for the belt. This is not to say that other female MC’s like Bahamadia and Lauryn Hill aren’t dropping butter raps; but Rah is “the feminist God that gets blunted” who keeps “heat by the waist for those who playa hate” as she herself asserts on “Tight”, a long overdue hardrock anthem for ALL heads in hip-hop, men or women. Even though Rah could qualify as a dimepiece with the catsuit and makeup, she’d rather get down and dirty and be remember for her lyrical prowess instead. It shows. On the slow flowing “Curtains” she’s out to get hers: “I’m gettin money ‘Off the Books’ like I’m Beatnuts/ make em sign pre-nups/word to my C-cups/fuck with they heads like Kahlua milk and vodka/then tell they punk ass to ‘Move On’ like Silkk the Shocker” – yowtch!

Part of what makes this album so outstanding is that Rah Digga really does handle the spotlight – the guest appearances are kept minimal and almost entirely within her family. Outsidaz guest star on the ruckus posse joint “The Last Word” and Flipmode drops on the smooth flowing “Just For You”. Busta Rhymes does split mic time with Rah on the Musical Youth inspired “Imperial” but is easily outshined by her ferocity; and Sonya Blade can barely hang with Eve let alone Rah on the heavily mismatched “Do the Ladies Run This” which may ironically be the album’s true weak moment. A reprisal of her duet with Young Zee on the Outsidaz “Fuck Y’all Niggaz” is blessed with a much better beat and has more energy; while songs like “Harriet Thugman” and the DJ Premier blessed “Lessons of Today” swing with the kind of pure energy rap hasn’t seen since 1988.

If you’re not going to like this album, it’s probably because you’re one of those irrational Ph.Ders who doesn’t think women belong in hip-hop. Rah Digga has paid the dues, and she has a hardcore voice and flow that are harder than hell for any true head not to like. Rah Digga intentionally or not comes off as the perfect female MC: not about to switch up or kick something soft to make herself appealing and TWICE as appealing anyway because of it. Any slow moments throughout are carried by her machismo – yes I said machismo – which far too many of her male contemporaries are hard pressed to match. On the latter of her two bonus tracks, Rah sums up this hardcore attitude well: “Dirty Harriet’s the name, sayin anything goes/actin like you never seen a tomboy in dress clothes/like to run around splurgin, deep in the Excursion/TV people pissed cause I spit the dirty version.” WORD!