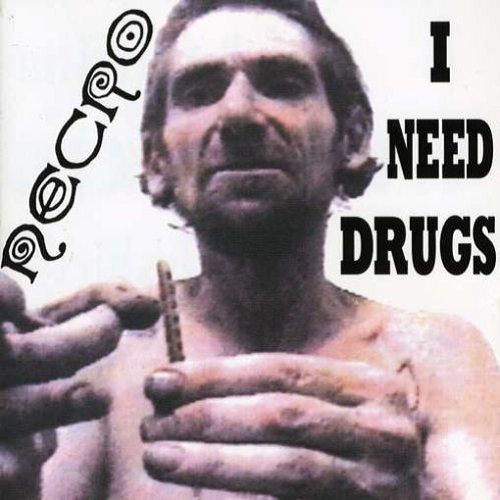 Ultra hardcore and white as your grandmother’s bedsheets – the definition of hip-hop’s self-proclaimed Necromancer. He is by turns witty, demented, sickening, and hilarious all in the course of a self-produced sixteen track full length album, “I Need Drugs.”

If you didn’t know about this indie label rapper who occasionally has sick freestyles on the “CM Famalam” radio show as well as appearances with seminal rap crew Non-Phixion, you may be on his nutsac from having heard or hearing the title track. This parody of LL Cool J’s “I Need Love” is so long overdue it will probably succeed in flying over the heads of a new rap generation which never checked for ish from the 1980’s. Those who haven’t heard the original version should check for it first; and those who have will undoubtedly laugh their heads off at this remake. Necro perfectly nails all the elements of the song: LL’s soft-voiced sincerity, the synthesizer chords, and the smooth breakdown between beats – but the whole time he’s filling his prescription for pharmaceutical stimulation.

“When I come home from work
I’m fiendin for an eight-ball
I got crack on my mind
I’m hearin cocaine call
Tellin me to beep the dealer to deliver me stuff
Keep it a secret from my wife, cuz she thinks I don’t use drugs”

Don’t confuse Necro for Eminem (or he’s likely to slash your throat with a razor) because their styles are nothing alike. Besides sounding distinctly like the missing member of the Beastie Boys (and also having Jewish heritage) Necro is truely not interested in the kind of hip-hop props Eminem craves (and mostly deserves). Necro is just out there on his own label, doing his own thing, making sick music. Necro is intentionally too nasty to ever have any of his songs cross over – his whole audience is being built one fan of his sadistic rap style at a time. Songs like the aptly titled “Underground” epitomize this approach:

“How can I make my point to you fools?
I’ll drop a dead A&R off a roof
and on his chest it’ll says ‘Necro rules!’
I’m above the constitution
My shit stays bubblin like burnt flesh
My rhymes are acid in Clorox solution”

The downside of this record though is that this full length includes all of his previous twelve inch hits like “The Most Sadistic”, “Your Fucking Head Split” and the viciously funny “Get On Your Knees” (Necro’s crass ode to oral sex). Out of 13 actual songs, at least 8 are cuts re-released here. Coupled with the somewhat repetitive nature of his topics (death, dying, and the dead prove he’s definitely a necrophiliac) Necro is a hard sell. You can see why he would want to compile these songs together on one record, but for the people who were already Necro fans or already owned his previous singles there’s almost nothing new left. Three radio freestyles are included; and while amusing they actually run into the problem real freestylers have – occasional gaps, stumbles, and lack of ideas. After listening to the formed and executed concepts of songs like “Fuck You to the Track” and “S.T.D.” this rambling will be a let down to any but the most diehard fans.

By the time Necro releases a new album he should carefully consider whether he wants to milk each possible single to his fanbase or release an entire record of previously unheard material they can appreciate. Necro will definitely be in demand as a producer, but he may unintentionally kill off interest in his own solo raps.