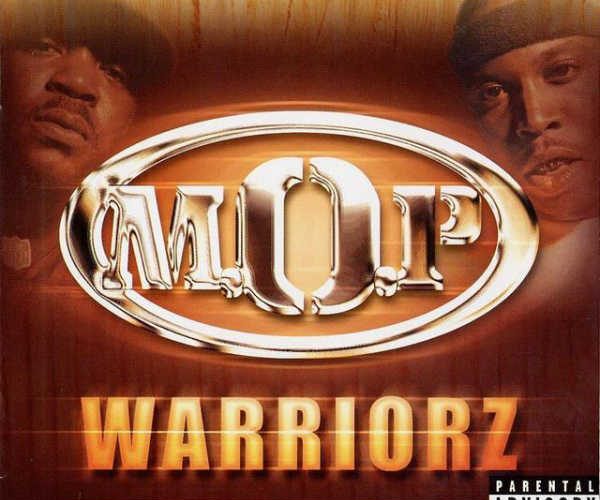 How about some HARDCORE? That’s what the Brownsville Bombers have in store for your punk ass. Far from spouting the cliche hard shit, M.O.P. damn near INVENTED the motherfucker with a whole slew of defiantly angry anthems and albums that are as loud as HELL. Lyricists or terrorists? Both. M.O.P. use their ultra-amped vocals and deadly rhymes to scare off any punk rappers who wan’ test.

In part, M.O.P. has built their legendary underground acclaim by theirTIGHT affiliation with DJ Premier. True to tradition, Works of Mart is in the house for 5 of the 18 cuts throughout and Primo also mixes on another 4. M.O.P.’s selection of other producers is just as hot though, and they even blaze their own cuts. The self-produced “G-Building” is one of the best examples. Fame and Danze tag team on the hyperactive bassline but Billy seems to blaze even brighter on this song:

“Listen; is it me or the industry
don’t understand, I’m a whole different breed of man
Bill’ Danze, Brownsville Bronx
Into servin double or single shots on the rocks
Nigga, what? Who gon’ tame me
I’m a bad block nigga and can’t, nobody change me”

If you haven’t already heard the lead single “Ante Up” produced by DR Period, turn on BET’s Rap City or your local East coast radio mix show any day this week. Hopefully the South and West coast are giving them shine too, but the more likely of the two would be the Dirty Dirty – they like to ‘Tear Da Club Up’ and this song is perfect for getting rowdy. Ignoring Funkmaster Flex’s useless intro, go straight into the track at 0:36 and get yourself blazed on some coming up shit where M.O.P. rob and steal for their next meal. “Get up off them god damn diamonds!” Shit ain’t sweet.

Don’t get the impression M.O.P. is just about talking smack or on some simplistic vibes lyrically. Danze and Fame can use the title of their album to describe their attitude OR their lyrical acuity. Just take Lil’ Fame’s rhymes on the Primo produced “Follow Instructions” as an example of the vernacular and the killer attack of their flows:

“All games aside, all lames aside
I’m a rebel, with all K’s combined
All things in line; I ain’t heard of y’all
I’m from Murder March
One of the illest spitters with a verbal bark
Yo where your burners at?
Fizzy Wo’ will raise the heat like a thermostat”

The thing that always raises the bar for M.O.P. above their competition is how they can make even the smoothest shit come off with a rugged hip-hop appeal. They turn the radio friendly Product G&B into some “thug life” shit on “Everyday,” spit poison over some smooth R&B produced by Lil’ Fame on “Calm Down,” and even rip “Foundation,” where the duo flow about the peers and parental figures who shaped their life on a chill Curt Cazal cut. Perhaps the illest twist of all is how they rock Foreigner’s top 40 hit “Cold as Ice” into the funkiest East coast anthem this year since Craig Mack’s “Wooden Horse.”

This album does not engineer societal change, does not hold out promise of a brighter tomorrow, and does not advocate viewpoints that influential minds should be exposed to. M.O.P. is ruthless and bloody in the same way that a Dirty Harry or Pam Grier flick is; and equally as entertaining. M.O.P. display pure ferocity on each and every song – never giving up, never surrendering. M.O.P. is also ruthlessly loyal – the self proclaimed “First Fam” has family values which say, “Don’t ever fuck with me and my man.” They may be dirtier, filthier, and louder, but M.O.P. are in many ways a year two-thousand version of Run-D.M.C. – voices which compliment each other and rhymes all about fighting for survival in the cold worlds of music and racism. They are true WARRIORZ.