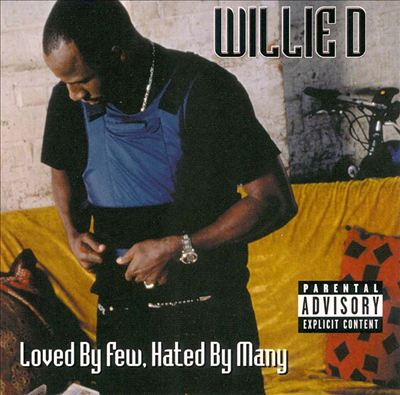 Willie D :: Loved by Few, Hated By Many

The original “Gangster of Love” returns in the Y2K to “Do it Like a G.O.” for a whole new generation of rap fans. For those who aren’t aware, D has shared the spotlight off and on again as a member of Houston’s most famous rap crew, the Geto Boys. This fame spun off several solo albums, one of which included the surprising and controversial song “Fuck Rodney King.” D has never been shy about making his thoughts felt or hitting people up with his own style.

Irony is a bitch though, isn’t it? When Willie D says he is “Loved by Few” and “Hated by Many” he is more accurate than he realizes. Geto Boys fans have always gravitated towards the deeper voiced and harder sounding Scarface, or the smaller sized and psychotically crazier Bushwick Bill, or even D’s brief replacement in the group, Southern rap legend Big Mike. D unintentionally hit the nail on the head – there are very “few” people who love him simply because his style hasn’t generated that many fans. I’m sure he thinks he isn’t “loved” because people player hate his fame and his wealth – some do, but most are probably just indifferent to whatever he does.

D seems confused by his own anonymity. Instead of sticking to the few concepts in his rap lexicon which could be trademarks, he releases an album of eighteen generic songs whose most distinctive features are who they imitate or who makes a guest appearance. He tries to sound like Scarface on “Lil’ Killaz”, he tries sounding like C-Murder on “Dear God”, and he tries soudning like Big Mike meets Master P on “It Ain’t Easy” – the latter actually being one of the better songs. The groove is smooth and the mournful lyrics work with the sung chorus. Still, imitation is the sincerest form of flattery for the one copies, not for the one copying.

Willie D is at his best when he gets animated, when he yells and shouts, when he basically doesn’t try to flow at all. That’s what made Geto Boys songs like “I’m Not a Gentleman” rap classics – D yelling at the fat beats that backed it up. D starts to get close to sounding like the old days on “If I Was White” when he starts calling out names (he busts caps at Denzel Washington and Cuba Gooding Jr.) but conceptually the idea is still kind of weak. Willie D wants to kick the conspiracy theories; but he should leave those arguments to KRS-One, Jeru the Damaja, and Ras Kass.

In “Pussendklick” (read pussy-in-the-click) D claims he is the realest nigga down South, but nothing about this album seems to be really original. Normally Rap-A-Lot’s in-house producers and guest mixers try hard to create the bomb, but they seem to have saved all the good stuff for Tela and Scarface this time around. Even decent tracks like “Fearing Nothing But God” and “Freaky Deaky” featuring U.G.K. still don’t pack enough punch to be bumpable for that long. These songs would fare well on a compilation album of Southern rap, but as a solo offering D’s newest album is the first time he has truly illicited nothing but a big yawn. Instead of sticking for the few things D had going that worked, he tried to blow up an album and be the South’s next big superstar. It backfires completely.