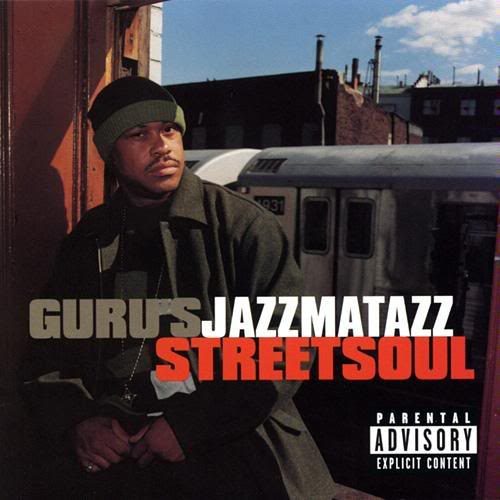 The heart of a warrior, the soul of a poet, and the spirit of a true hip-hop fanatic; these things describe Gifted Unlimited Rhymes Universal – Guru for short – as best is possible. Guru and his partner DJ Premier released a decade of classic albums as the combo GangStarr, but what’s somewhat surprising is the lack of recognition Guru’s experimental “Jazzmatazz” albums have received by comparison. Guru’s raps were just as sharp, and the music was just as ill – in some cases iller. Guru brought in some of the world’s greatest musicians such as Roy Ayers and Branford Marsalis to provide the backdrop for his smoothed out East coast vocal tone. Each album was critically acclaimed, and relatively ignored by the public except for a few “heads” and GangStarr/Guru fanatics.

Perhaps that’s what lead Guru to change up the formula for this third installment. Instead of specifically invoking the “sound” of jazz this time, Guru opted more for the “spirit” of jazz music – free-flowing collaborations that utilize the best talents of all contributors. Certainly nobody can be dissapointed with how the end product turned out – these are some of Guru’s best tracks of the series. The artists who showed up add the right touch each time. Angie Stone positively FREAKS the vocals on the DJ Scratch produced “Keep Your Worries,” Bilal belts out the hook to the positively beautiful Jay Dee production “Certified” and even those ubiquitous Neptunes show up with their homegirl Kelis for “Supa Love.”

It’s hard to find an unenjoyable track on this album. The smoky club sound of “Plenty” with Erykah Badu will have your fingers snapping, and the back and forth battle of wits between her and Guru will have you laughing! DJ Premier hooks up his longtime collaborator with a fat track for “Hustlin’ Daze” while R&B favorite Donell Jones (of “U Know What’s Up” fame) handles the hook. “Lift Your Fist” with The Roots features both their unique live sound and the clever rap flow of Black Thought. The illest thing though may be the fact Isaac Hayes doesn’t sing on “Night Vision” – he just lends his chocolate silky voice to the ‘tween rap interludes.

Closing out the album with the Herbie Hancock duet “Timeless” is a statement with an exclamation point – the album has so much material we could save the best collaboration for last. Guru describes the combo as “more potent than any herbal essence” and he couldn’t be more right. The only people who are going to find fault with this smooth, funky, and yes jazzy album are the same people who always find fault with any new GangStarr album; some people just don’t appreciate Guru’s flow or semi-monotone vocal pitch. To each their own – but if one had to pick any rapper to hear rapping with the best soul musicians of the 20th and 21st century, it would have to be Guru – hands down.