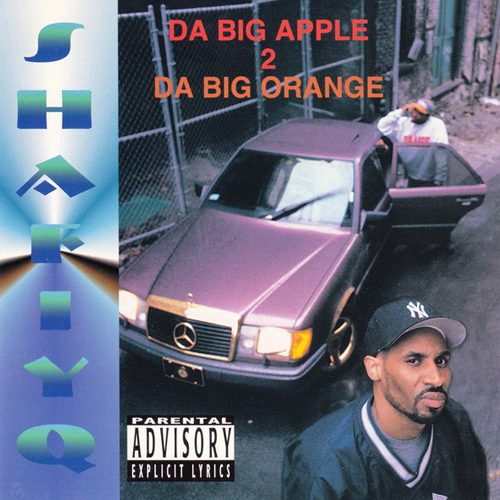 The normally reliable tome of underground hip-hop once known as Ego Trip magazine said that Lord Shafiyq’s only contribution to the world of rap was 1987’s classic “My Mic Is on Fire” twelve inch. Sorry, no. Artists who make that much of an impact on their rap debut don’t normally disappear without a trace. I’m not saying it’s NEVER happened before, but in Shafiyq’s case he still had more to say.

An editor’s note before we continue: a second party who knows Shafiyq contacted RapReviews and asked for an honest review. Shafiyq himself said that he wasn’t quite satisfied with this release, and has been back in the lab working on something hotter. We don’t want to make excuses though – Shafiyq’s original twelve inch made him a legend in underground rap, but his album still has to be judged by modern standards. Thus, we shall continue.

Shafiyq’s vivid imagery created a sensation when he compared himself to a pork chop commiting suicide back in the day and he obviously still has some of those skills. On “This is What I Do Best” he raps his “pockets are green like chlorophyll.” Unfortunately this is also offset by some cheesy snaps like “I’m Glad-ys Knight-fall” (glad as nightfall) that don’t work whatsoever. On this song he also sounds like he has been absent from rap for a decade. Back in the day he came off lyrically fired up and Asiatic like a mixture of Big Daddy Kane and Wise Intelligent. Now he seems to be sleepwalking through his flow. Even spoken word poets like Saul Williams interject emotion and energy into their raps, but Shafiyq continually sounds like a drained battery – coming off like an amateur instead of a skilled MC.

Sad as this is to say, if you didn’t know who Shafiyq was from back in the day his surname was Lord, you might not even be checking for this album. One can’t help getting over the thin beats and weak concepts of songs like “Sorrow Will Come Tomorrow” and the poorly mastered “It’s Been So Long” which borrows loops from four or five familiar rap tracks. Shafiyq again tries to interject famous names in his snaps when he says “I got the chainsaw, cleaning up Forrest’s like Whittaker” and then adds injury to insult by following it with “Splitting wigs like Sweet Pea, Whittaker, Pernell.” I hate to credit any rapper with a rhyme that bad.

The album continues to suffer from thin sounding beats and predictable concepts. “Great Donut Caper” is obviously about a cop encounter even before you press play, and even though this is a critical issue in hoods nationwide it comes across as a cheap ploy to win support by rallying against pigs. This song was recorded before the Amadou Diallo incident, and it shows – there’s no real emotion, just stereotypes of cops as fat, lazy, and racist. Couldn’t he have said something slightly more relevant? For a rapper who once sounded incapable of making a weak statement or thought, the tired misogyny of songs like “Don’t Ever Give My ‘P’ Away” and simplistic wordplay of rhymes like “Now what can I do to this, uterus” just don’t cut it.

Recording engineer King Kut’s studio is named “Crib Full of Shit” and it shows. Shafiyq is not entirely to blame for this album’s weaknesses – if he had been given more inspiring beats of a DJ Premier or Pete Rock quality he might have come with some real fire. Even Shafiyq’s self-named “Shafiyq” which samples Eric B. & Rakim’s “I Know You Got Soul” won’t elicit a head nod response. The entirely inappropriate and misnamed “Jiggy” is anything but – ironed creases are sharper than this wannabe club track. What were they thinking when this song was conceived? To get an idea, peep these lyrics and imagine a Casio drum-n-snare:

“Once we got to my rest, her attire came down
Hmm, all good, she’s lookin scrump-tious
You better believe, I’m humpin this
She jumped in my bed then jumped out in shock
and asked, “Who’s the other chick layin on your cot?”
Oh, that’s my girl, she likes to watch
She asked, “Will she be joinin us?”

I’m sorry to say this, but this verse is not only a direct rip-off of Bushwick Bill’s “The Other Level” but Bushwick did the shit twice as well. The narrative is corny and so is the beat; and truly there is no song you can’t say this about. Shafiyq tries hard to sound relevant on cuts like “Moving Weight (Big Orange Version)” and “The Pain I Feel” but consistantly misses the mark. The thing that hurts the most about this album is that you can hear the potential of the man who once said “I am the antidote, and I’m dope, and I’m anti-wack; which is to say being wack, is what I lack” and made it sound believable – it’s just not there anymore. We can only hope that his next release is sincere in it’s efforts to make up for everything that this one lacks.