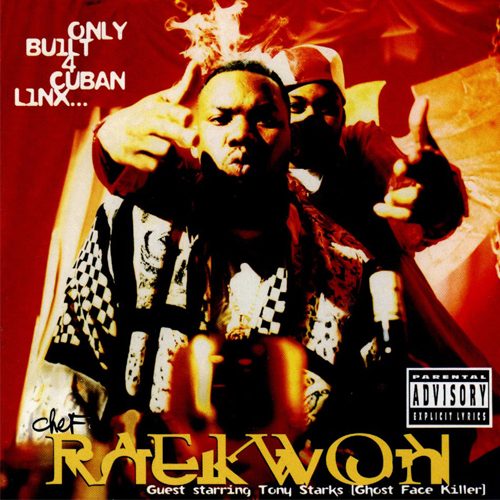 In 1995, hardcore hip hop was dominated by two factions: the gangstas of the West coast, and the gritty thugs that came out of the East. Although Kool G Rap founded Mafioso rap longbefore this album was even recorded the steelo had not yet been popularized. Enter the man known as the Chef, and his partner-in-crime Ghostface Killah. Along with Jay-Z’s “Reasonable Doubt” which dropped the same year, “Only Built 4 Cuban Linx…” revolutionized the hip hop scene. Suddenly the mink-wearing, Cristal-sipping, Benz-driving drug dealer image was the “in” thing; evicting the 40 drinking, low-rider driving, “rebel without a cause” gangsta from the throne he had held since 1992 nearly overnight. The influence of this album can be seen in artists as credible and respected as Nas and Biggie Smalls, who went from (essentially) petty thugs on their first albums to crime kingpins on each of their second releases.

Of course, you have to take the good with the bad when you’re influential. A lot of the people utilizing the Mafia rap style nowadays act like being a big time criminal is nothing but fun and games, neglecting to ever mention the downside of the lifestyle. But this album is as far as possible from the “I’m a fly thug who doesn’t play by the rules because I don’t feel like it” attitude that saturates most releases in this genre these days. During the intro, appropriately titled “Striving 4 Perfection”, Rae proclaims “I’m not trying to just be sitting on, motherfuckin, $200 grand, and acting like I’m gonna be a drug dealer all my life; I got bigger and better plans… Let’s keep moving ahead, man, keep our head up, man, take care of our families.”

But content and message alone are not enough to make an album; delivery and beats are also necessities, and “Cuban Linx” has each of these to spare. Raekwon spits multisyllable rhymes that most people would stumble over severely as though there’s nothing to it; RZA comes with, in my opinion, the best produced album he’s ever been responsible for.

The first two tracks are perfect examples of the type of versatility RZA is capable of. “Knuckleheadz”, featuring Ghostface and Golden Arms, features an uptempo piano loop; it is followed immediately by “Knowledge God,” a dramatic backdrop for Raekwon to paint lyrical pictures of crime stories in the listener’s head. “Criminology” featuring Ghost is another uptempo beat with RZA’s distinct flavor, and Raekwon drops some of his trademark dope rhymes over it:

“AK’s, black, bust back like seventy Macks
I’m all that, street niggas knowin my steez, black
Raw G, you know they go inside with me, see
Marvelous, menace to society
But anyway, let’s toast, champagne thoughts with Ghost
Max the most, shotguns through the notes”

“Incarcerated Scarfaces” pops up next, complete with one of the RZA’s best beats of the album. Raekwon destroys this track, ripping it as hard as he does on the entire album from the first verse: “Thug related style attract millions / Fans, they understand my plan / Who’s the kid up in the green Land? / Me and the RZA connect, blow a fuse / You lose, half ass crews get demolished and bruised.” This is followed by the cinematic classic “Rainy Dayz” with Ghostface speaking of the difficulties of making it in life, be it through the rap game or other methods. As Ghostface puts it: “Waiting on these royalties / Takes too long, it’s like waiting on babies / It makes me wanna slay thee”.

The only non-Wu member who shows up to drop a verse is Nas on “Verbal Intercourse.” This verse is lauded as one of the greatest ever, and with good reason. Nas flips one of his trademark prophetic rhymes, and this one is a true work of art. Raekwon, not to be outdone, drops a damn good verse himself:

“Perhaps, bullets bust, niggas discuss mad money, true lies
And white guys, we can see it through the eyes
Catch the most on tape, kilos disintegrate
Pyrex pots, we break, fiends lickin plates
In the buildings, niggas building, like little children, staring
The more them niggas ain’t caring”

On “Spot Rusherz” Rae goes the Kool G Rap route and spits a crime story rhyme with a relentless pace and seamless flow. Aside from the impressive verbal gymnastics present on this track, the images are vivid and the story is easy to understand. The hit of the album though is “Ice Cream” featuring Ghost, Meth, RZA, and Cappadonna (then known as Cappachino). This, the lone playa track on the album, still has the gritty Wu sound but the verses, and in particular particularly Hot Nikk’s chorus, have mass appeal without being watered down.

The posse cut “Wu-Gambinos” features appearances by Ghost, Meth, RZA, and Masta Killah. As the title tells you, it’s the Clan spitting some hard-edged Mafioso shit. The slow paced, somber “Heaven & Hell” is a reminiscing song about losing a friend. The verses are excellent and the song is a great way to end an album. It isn’t the official end though as the CD bonus track “North Star” follows. But this song has much the same mood and similar message; it, too, is a great way to close the album out.

There are plenty of good albums; it’s not even that hard to find an album you’d call great. But it is a rarity for an artist to assemble a work that deserves to be called a masterpiece. Raekwon and Ghostface Killah, with more than a little help from the RZA, created one with “Cuban Linx.” Rae’s ability to write deep, meaningful, flat out NICE lyrics and then deliver them with impeccable flow and an ill voice paired with Ghostface Killah’s passionate delivery of complex lyrics and his very distinct voice makes them a perfect duo of MC’s. You could look for a long, long time, try to find something wrong with this album, and you’d be hard pressed to do so. This shit is damn near flawless; the beats, the MC’s, and the lyrics are weaved so intricately together here, they make you feel like you are there, witnessing the events spoken of, clear as “a 27 inch Zenith, believe it.”