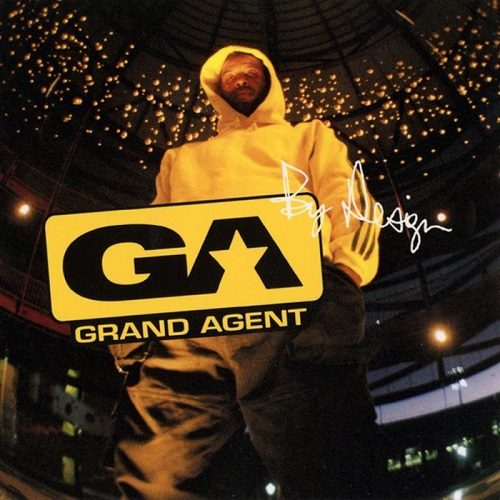 Illa-delph native Grand Agent aims to be the next thing blowing up big out of a city that’s given birth to every sound from Will Smith to the Mountain Brothers; from The Roots to Schoolly D. Thus Agent is not limited to one sound or style – he can draw inspiration from backpackers to thugs, from live instruments to straight sampling.

With collaborators like Kut Masta Kurt, Chops from the Mountain Brothers, Lord Finesse and Hi-Tek on the beats, you would expect red hot fire and their tracks do not dissapoint on this score. The lead single “Every Five Minutes” by Kurt attacks with a combo of bass and winds that’s mixed together with Agent’s tale of wanting to hear a favorite new rap song again and again. Hi-Tek’s work on “It’s Only Right” brings a folksy guitar together with an orchestral backdrop, while underground favorite Planet Asia tag teams the track attack for double the pleasure. “Know the Legend” has Finesse slyly digging into a small chunk of “Scooby Doo” again (he first wrecked it on “Knockin Niggaz Out”) but instead he stretches it out and adds some crispy hi-hats and wood blocks to a thumping bass. Agent brags and boasts while Finesse sardonically remarks “you think you’re a legend” in the chorus. And Chops turns in a typically strong performance as beatmeister with the flowing “Waughter” and the bouncy funk of “Grand Right Now.”

The tracks on which Grand Agent provides his own music are not quite as hot though. Chops lends a hand with the production throughout (he’s even billed for it on the album’s shrinkwrap) but even he can’t turn spam into filet mignon when Agent serves it up on “From the Gate” and “The Man Who Could Be King” – and those are the first two tracks on the album. Of the two the first had more potential, but a relatively good bassline repeated ad infinitum with no deviations is not working – and the latter features a straight ridiculous re-interpretation of “Joy to the World” which even non-Christians would find insulting. It’s painful to the ear.

Even a partner from his underground Philly rap group “Name” turns in better music on his track. Mr. Cisum expertly dices up Diamond’s “Best Kept Secret” on the cut “New Mingling.” Not all guest producers wreck it though. Andre the Giant turns in a track just as monotonous as Agent’s own beats with “Rap Niggaz” which also features the ridiculous chorus “cause I’m a rap nigga and I rhyme ill, I can rhyme the hood out my body at will.” Maybe Agent can, but why would he want to?

While the expertise of Chops on the boards keeps the music levels fully EQ’d and the tracks nice and clean, his skills are best deserved by his fellow Mountain Brothers rappers. Not only are his beats superior to Agent’s, his rhymes are as well. They feature the kind of clever humor and witty wordplay that Agent seems too often to forget about. Why else would he release an ignorant song like “Two Bitches” and think it’s hot? If you’re going to thug it out you should go the route Ice-T did on “99 Problems” – because he takes misogyny so far over the top it actually becomes fly; whereas Agent’s game seems more like checkers than Monopoly. Trying to carry on Schoolly D’s tradition is a worthy goal, but Agent made his name as a “backpacker” style rapper and it’s only there which his talents seem to shine.

Eventually, Grand Agent’s voice just becomes annoying. His claims that “I posess fresh viewpoints of thangs” seem to ring hollow and false. It’s not as if Agent doesn’t flow on beat. It’s not as if he doesn’t present the themes that his songs claim in their titles. What really seems to come across from Agent is a lack of ENTHUSIASM. Where the lead single seemed to capture the moment of excitement from hearing something new and hot, a majority of the other 14 tracks seem to capture a rapper just trying to churn out enough songs to follow up his single and quickly push an album out. You’ll wonder if he had a cold or a sinus infection when he came to the studio; because even when the words pack impact the delivery is sluggish and lacking in positive vibes.

Grand Agent is not a terrible emcee – but without hot beats he just doesn’t seem to fire on all four cylinders. He becomes the latest in a long list of MC’s who simply need to leave the beatmaking to more capable and qualified hands so he can concentrate on amping up his delivery and penning lyrics which stick with you for more than a fleeting moment. The twelve inch singles he has already released set a high water mark and unfortunately this album comes in at low tide.