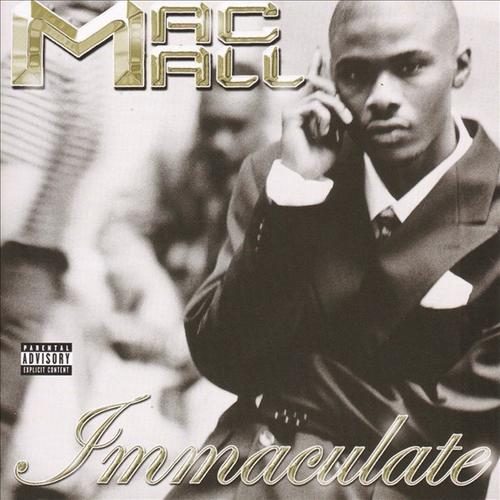 Bay Area rapper Mac Mall is the latest in a long line of mic-wielders who struggle to incorporate religious beliefs into their life and their music. “Immaculate” is his fourth longplayer already, but it seems like the new millennium made him think increasingly about spiritual matters. When you listen to a rapper whose music is somehow affected by religion or faith, it’s not always clear of what exact nature his relationship with these things is. From the Five Percenters on the East Coast in the late ’80s and early ’90s to several rappers affiliated with the Nation of Islam or of Christian belief, many of them were suggesting behavior that, had they had full membership in these churches, they probably wouldn’t have suggested. Now religion is sacred to me and the least thing I would want to do is criticize someone for what they believe in or how strongly they believe in it. It just occurs to me that rappers are no different from every one of us who is torn between what a God might want us to do, what our peers expect us to do and what we ourselves would like to do.

So now here comes Mac Mall, declaring himself “Mac Jesus” and “God’s gift to macking”. If there +is+ a god that approves of macking. I heard there is, and he’s often referred to as the ‘Mack God’, but I get the feeling that’s not the only god that Jamal Rocker bows down to. Now I know ‘the game’ has its own rules and when it comes to rappers in the macking tradition, they can easily be as brash and braggadocious as their gun-packing or backpacker counterparts, but with all its Biblical references “Mac Jesus” does seem a bit blasphemous. Mall not only thinks he’s Mac Jesus – by taking on the moniker Iatola Komani (derived from Iranian revolutionary/spritual leader Ayatollah Khomeini), it seems like he wants to be one of 2Pac’s Outlaw Immortalz, and indeed Fatal Hussein pops up on “Save Me”. Mall name-drops Makaveli a couple of times, but he’s clearly not among those who try to copy the late Tupac Shakur. For that, he’s been in the rap game for too long and was able to develop his own style. Quite frankly I haven’t come across a rapper who sounds like Mac Mall. The most noticeable quality about him is his high-octane voice that can carry an album from beginning to end, grabbing hold of the listener. Then there’s the unique intonation of his statements: He raps with confidence and matter-of-factly yet there’s always a tinge of some sort of plea, which makes him quite fit for being a street/conscious rapper.

So you get from “Immaculate” what you might expect. A freaky tale called “Seventeen”. Not more than two choice guest appearances, the one by Fatal and one by Shock G who produces the plush “Chassy”. You get self-glorification in “Mac-nificient” and “Immaculate”, you get songs from a hustler’s perspective like “Bossin’ Up” and “Monster” and songs that give up game like “Some More of It” and “P.O.P.”. And you get songs that come unexpected to those who think game-related rap can only degrade and humiliate women. The moving “I Feel Your Pain” offers consolation to a woman who from early child abuse to teen pregnancy and single motherhood goes through all the hardships women often face. With Steven Soderberghs movie “Traffic” scooping up some Oscars last month, “War on Drugs” reminds us that rap has called the bluff on this futile ‘war on drugs’ again and again. The song gives a complete historical overview, beginning in the ’80s, showing what desastrous results this war has produced.

And, finally, there’s “The Man Upstairs”. Here Mac Mall displays his ability to tackle topics from different angles. He sees “everybody seeking salvation” and trying “anything to kill the pain”. He mentions the Heaven’s Gate cult members who collectively committed suicide expecting to be taken away to an afterlife by aliens, and he even ponders the possibility that they could have been right: “And the cold thing about it: what if they was right / and we was too blind to see the light? / Huh, I doubt it, but that just goes to show / how far people’ll take it just to feel hope”. With a God that seemingly doesn’t see the need for interferring with the ways of the world, mankind aims to keep that hope alive, somehow still screwing up:

“On the news they say we years from the clone
You know the words, man, “2000 triple zero, party over, we gone”
As the choir sings songs of redemption
In the U.S. we dyin’ for religion
Out in Europe they dyin’ for religion
I say this and hope the Holy Father’s listenin’
Livin’ in this New Age Babylon, preachers havin’ telethons
Justice playin’ war games, waitin’ on the Red Don
And then they wonder why the kids do drugs
Cause Uncle Sam don’t show no love
We need the Man Upstairs”

It’s the realization that mankind might need a ‘man upstairs’ that leads Mac Mall to talk about and talk +to+ such a man. He just doesn’t know for sure what to expect from this force greater than him. He would like to believe, but what he sees leads him to think otherwise: “They say the meek shall inherit the Earth / I say savages gon’ take over the turf”. That’s why he starts off “Immaculate” with “Mac Jesus” and ends it with “The Man Upstairs”.

If you think that a record review is the wrong place to discuss such issues, let me just say that the record itself is addressing them. ‘Okay,’ you might say, ‘but what about the music?’ ‘I want to know if I can bump this album in my car/walkman.’ Damn right you can. Maybe this review ended up being like it is because “Immaculate” is such a good record. If a record is good, you don’t have to busy yourself with what it lacks, but instead you can focus on what the rapper is saying. For “Immaculate” being a thoroughly good record we gotta not only thank Mac Mall but also his long-time producer Khayree, who brings the heat on many of the tracks, Femi Ojetunde, another one of those dope-ass producers out of the Bay, and last but not least DJ Yon, who supplies actual scratching to some of the tracks (and we know how rare that is nowadays). Speaking of things that were once essential to hip-hop: Mac Mall is one of the few rappers today who still talk about +being a rapper+. For the sub-genre that Mac Mall is placed into, that’s rare, but maybe Mac Mall doesn’t fit in no sub-genre, maybe he is one who could go beyond a local following. And hip-hop is indeed in need of rappers who are embraced by everybody after the deaths of Pac, Biggie and Pun. So, how’s about some Mac Mall y’all?