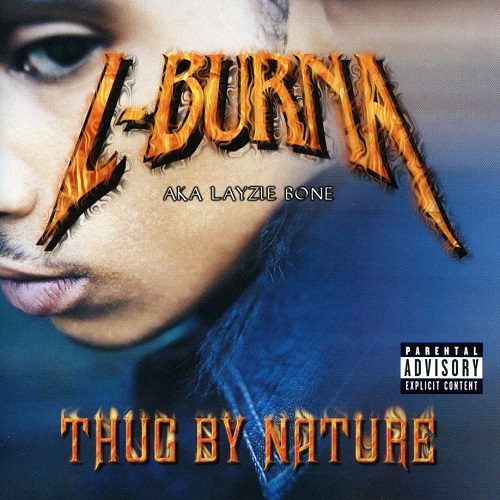 The legacy of Eazy-E continues to live on at Ruthless Records. Even through Bone Thugs-N-Harmony may or may not ever record again as a crew, group member Layzie Bone has come out with his first solo album. It may seem a little late since Krayzie Bone and Bizzy Bone have already been exploiting their Thuggish Ruggish fame – in fact, Bizzy released his second solo album the same day as Layzie’s solo debut hit stores. Layzie means to distinguish himself from his breddern though by being the first to change his name. No longer just a “Bone”, Layzie is now also known as L-Burna – a name his sister gave him to indicate how he’d “set fire” to the industry.

If you’re not already familiar with the Bone Thugs revolutionary style from their stable of industry hits, a brief introduction is in order. Straight out of Cleveland, Ohio – the Bone Thugs came up out the Midwest with a whole new rap format. Their rap diction is often so fast it’s hard to distinguish, and the cadence tends to group words together in “triple time.” To get an idea of how this style flows peep the lyrics in the lead single off L-Burna’s album, “Make My Day.”

“Watch out! / Nigga I’ma knock out any motherfucker that be thinkin that they bout it
Wanna talk about it / do somethin about it
Them clean-up boys’ll get rowdy
Nigga get buck with me / get buck with me
Now you knowin that I’m ready to die
for Thugs N Har -mo -ny”

Combined with their tendency to harmonize their lyrics and mix their flow with a very musical flow sometimes indistinguishable from straight singing, the Bone Thugs rewrote the rules of hip-hop. The Bone style is now commonplace in rap and R&B; just listen to “Say My Name” by Destiny’s Child to see how far their influence has spread. L-Burna may have changed his name, but he definitely hasn’t changed his style. On this album he sticks with the musical melodies and triple time rhyme flow that made his crew legendary.

Despite opening the album with a cheesy “Carole of the Bone” that tries to thug out Christmas, L-Burna immediately rectifies his mistake with the fire-hot “Battlefield” with a dramatic chorus of “Put that on my momma, I’ma bring the drama, it be death before dishonor.” L-Burna gets extra props for referencing Digital Underground in his second verse by paraphrasing the “Humpty Dance” – it’s good to know some cats in hip-hop still respect their peers. This is followed up by the Darren Vegas produced bass bomb “Connectin’ the Plots” featuring WC, easily one of the most underrated rappers in hip-hop music today. The thing that stands out is that even when L turns his flow up to high speed, his verbal diction comes across very clearly – moreso than it did in Bone Thugs. Going solo it seems has many advantages.

L-Burna keeps it a true solo album by performing the majority of the nineteen tracks himself, which is both refreshing and at the same time a little taxing. L is a more than competent rapper but with so many tracks not all of them are up to snuff. “Fear No Man” sounds like a merry-go-round with a broken record; yet LT Hutton produces the spooky sounding “How Long Will it Last” as well – they’re like night and day. The song “Still the Greatest” is notable for including Flesh-N-Bone, but the chorus is a bit corny. Again production makes the difference, because Darren Vegas laces a Santana-esque latin feel into “Listen” while Layzie raps about “getting closer to God” and doesn’t make it in any way trite or preachy.

The biggest surprise of this album for me was “There They Go”, where crooner Aaron Hall shows up to provide the hook and sing ad libs throughout. The melody and words in the chorus are eerily reminiscent of Tupac Shakur’s “Ambitionz Az a Ridah” but fit the song perfectly. A majority of this album is as strong including the title track, the Tony Toni Tone influenced ode to weed “Smoke On” and the rebellious retaliatory recital “Up Against the Wall.” L-Burna’s angry attitude informs both this song with it’s “I heard some nigga that said I was stupid cause I fuck with Ruthless – I love Eazy” rhymes and the album as a whole. Although he often seems mad Bone hasn’t gotten respect in the critical press their fans certainly won’t be mad at this release. With this album Layzie proves he was an integral part of Bone and it’s success, and he’s out to get the propers they BOTH deserve.