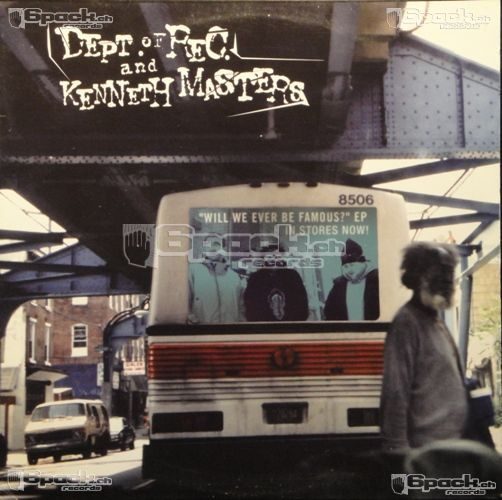 Dept. of Rec & Kenneth Masters :: Will We Ever Be Famous? EP

The City of Brotherly Love has been doin it for more than a hot minute. In recent years, Illadelph has been more than solidified as a place that churns out emcees from Beanie Sigel, Eve, and Tracy Lee, to bands like The Roots, and even R&B talent like Jill Scott, and Musiq Soulchild. But, as in the case of many cities that generate hip hop talent, for every emcee that catches a deal with Roc-A-Fella or Ruff-Ryders, there are hundreds more doin it on the independent tip. Arrakis Records artists Kenneth Masters (KMASS) and Dept. of Rec, consisting of producer Stape Mega and Adam12, are exactly that, with the split E.P., “Will We Ever Be Famous?” From the outset, KMASS lets you know he’s out to flip linguistics and not waste time on some ABC flow on the solo “Declarations (…of War)”:

“Intricate with innocence
I’m complicated spittin’ it
Mass be the truth plus the proof
Know what the difference is
Crackin’ on the feminine
Blushin’ to bring it intimate
While scenes change
I remain skills unlimited
Started and I finish it
Infinite with my penmanship
Fuck John Blaze
Most of these cats, they simmerin'”

Heavy on the battle rhymes, KMASS is no rookie with the pen or the microphone. While many emcees with a quick paced flow and complicated rhyme patterns are hard to decipher, Mass’s lyrics are pronounced precisely so the listener can understand every word. Producer Stape Mega’s production on “Declarations” is quite appropriate with haunting strings, sirens, bombs dropping, and even muchine guns clappin’. The next 2 tracks on the 4 song EP, The KMASS/DOR collaboration “Freddy Vs. Jason”, and DOR’s “Witch Jawn” reveal that these guys have a serious fetish with horror movies. “Freddy Vs. Jason” is at times entertaining as KMASS and DOR tell what would happen if various horror movie icons (besides Freddy and Jason, even Michael Myers, Chucky, and the Leprechaun show up on this one among others) threw down and got it on, but ultimately lapses into corniness as the screams in the background are annoying, and one can only listen to the track a few times before it gets old. Again, Stape Mega sticks to the formula of eerie strings, which wouldn’t be bad if it weren’t for them damn sound effects in the background. Otherwise, clever string variations and beat changes actually make this one a head nodder, although Mega’s beats at times, tend to sound dirty and unfinished.

The aforementioned DOR solo “Witch Jawn” does not do much for the EP as Adam12, subject matter of blood, guts, killing, and anything gory, gets old. Once again, Stape Mega sticks to that “scary beat” blueprint, which after 3 tracks, is starting to sound monotonous. But just as this reviewer is about to dismiss this EP, as “aiiight”, the jewel of the EP shines through the headphones. “Will We Ever Be Famous” KMASS and DOR spit for every emcee in his room, with a mixer bought at the flea market and a busted pair of headphones as a mic, dreaming of making it in the rap game. With the catchy hook, “will we ever be, ever be famous/put out the word I refuse to stay nameless/You know we got the skills in the mix to make it happen” This track has potential to become an underground favorite among any mc hopeful. As usual, KMASS delivers with witty rhymes, but surprisingly doesn’t overshadow DOR, who redeem themselves after the disappointing “Witch Jawn”, and promise to take the game over “like dictators and ebola” Stape Mega finally abandons the violins and chellos and goes to uses bells to create the perfect landscape for KMASS and Adam12 to rock over.

Dept. of Rec & Kenneth Masters :: Will We Ever Be Famous? EP
6.5Overall Score
Music6
Lyrics7