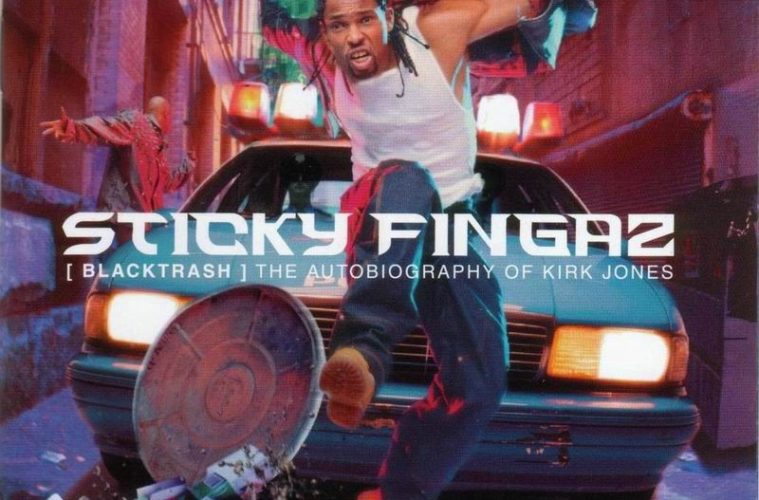 For nearly a decade, Kirk Jones has put the “grime” in grimy. The vitriolic and intensely confrontational flow of Sticky Fingaz was the voice who caught ears every time an Onyx song hit the needle. The self-described “mad author of anguish” was as much their spokesman as their star. By their third album Sticky’s situation was like what the Leaders of the New School went through with Busta Rhymes: his manic energy could just not be contained as part of a group.

Almost three years to the day that the last Onyx album “Shut ‘Em Down” was released, and several months after fellow group member Fredro Starr dropped his own solo album, Sticky Fingaz much awaited album finally arrived in stores on May 22nd. The stakes are now high; as Sticky has made high-profile cameos with artists like Eminem and Snoop Dogg in the interim. The public is hungrier than Sticky with his pockets on E; so to satiate their cravings he went all out with a Prince Paul style “A Prince Among Thieves” concept story album. For a rapper whose strength has always been in-your-face narratives, it’s the ideal gamble for an LP that’s long overdue.

Many hardcore rappers use theirnom-de-plume to keep a certain amount of distance from their subject matter; but Sticky Fingaz blurs the lines between fiction and reality on this self-styled “Autobiography.” Is that really Kirk Jones, or just a character Jones portrayed for the record? While you try to sort out the conundrum the album draws you into an intricately woven story where for once, the interludes really do matter. You might be tempted to skip over them from the “Intro” onward – and these songs actually could stand alone – but you’d miss out on all the drama. Jones comes home on parole and hooks up with his man Bruce, gets fronted on at a club, and borrows a weapon to get his revenge – earning the nickname ‘Crazy Kirk’ in the process. Omar Epps lends a hand as the “Conscience” of Jones as he thinks about the shit he did, but Jones continues to spiral downward through violence into tragic and self-destructive consequences. If you overhear any naysayers talking that “rap music glorifies violence” nonsense, be sure to play them this album.

As for the songs which can be more directly attributed to Sticky himself, they vary from decent to pretty damn good. The more stripped down songs like “Come On” and “What Chu Want” allow Sticky to dominate the tracks with his raspy voice and energetic flow; while on songs like “Oh My God” Sticky experiments with the “rapping with myself” multiple voices technique first perfected by Slick Rick and later used by Redman, Notorious B.I.G. and DMX. The results are quite impressive herein, as he actually confronts the supreme being with questions about the meaning of life:

“Is there even a God? Do you even exist?
What I gotta do to speak to you, slit my wrists?
I’m talkin to a God that I can’t see
Can you see me? Can you see me?
[ARE YOU CONFUSED MY SON, AND SCARED]
[LET ME MAKE THINGS MORE CLEAR, SO YOU’RE MORE AWARE]
Fuck who was that? All this shit is freakin me
[IT IS I GOD, DID YOU NOT SAY YOU WANTED TO SPEAK TO ME?]”

Guest stars pop up throughout the album, but are not allowed to disrupt the dominance of Sticky Fingaz – in fact on the song “State vs. Kirk Jones” they actually contribute to the narrative; with Canibus prosecuting for the state while Redman presents a vigorous defense in an attempt to get Jones off the hook. It fails though as Rah Digga hands down the jury’s verdict – guilty on all counts. What may be even more surprising though is that Sticky drops a couple of really smooth songs into the narrative’s mix that aren’t insulting to hardcore rap fans: “Baby Brother” featuring Dave Hollister, and the moving “Sister I’m Sorry” with Chocolatt. Sticky not only successfully breaks from the pigeonhole he’d been stuffed into as a thug rapper but gives his narrative’s character depth beyond the violence and ignorance that lead to his downfall.

With songs like the DJ Scratch produced lead single “Get it Up,” the humerous Eminem duet “What If I Was White” and the clever “Money Talks” with Raekwon where Sticky literally +IS+ money, there’s plenty of material to enjoy throughout this album. By the time Sticky/Kirk sings his way through the irony of covering “Wonderful World”, a full appreciation for the depths of Sticky’s talents as a writer AND rapper have been revealed. This album may actually not be what diehard Sticky Fingaz fans from his Onyx days expected though; as Sticky puts some of his trademark lunacy and braggadociousness to the side for the sake of having Kirk Jones be a complete character. One almost wishes he would spin off an EP of straight-up shit talking, like his assertion on “Not Die’n” that “If it wasn’t for Kool Herc, hip-hop wouldn’t have been created/That’s BULLSHIT! I woulda created it ten years later” – ALMOST.

This album may possibly be the best attempt any rapper has ever made to weave an entire album into one story; and yet still retain coherent individual elements that could actually be spun as singles or bumped on your favorite mix. For that alone Sticky Fingaz would earn high praises, but on the strength of his lyric-writing and top notch flow, he earns even more. On an album of beats that are effective or better on 4 out of 5 tracks, the ultimate summary of “The Autobiography of Kirk Jones” is that it’s an album almost any fan of intelligent, hardcore hip-hop simply can’t be without. Despite the long delays, Sticky Fingaz’ solo is INDEED worth the wait – and worth it’s weight in gold.