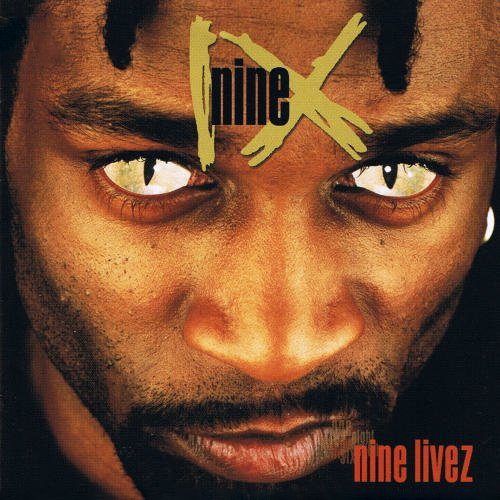 Whutcha want. Nine? For hardcore rap music in ’95, this was the buzzword on everyone’s lips. With a catchy video, a swinging bassline, and a gruff voice that sounded like he just smoked a whole box of Phillies, the rapper whose abbreviated name was once synonymous with a popular pistol bumrushed the rap scene.

To many people, the hardcore hip-hop appeal of “Whutcha Want?” may have seemed like a flash in the pan, but Nine had been wrecking the underground for years and doing joints with Funkmaster Flex strictly for the DJ’s. With that much unbridled talent, Nine was not about to go away with one single. The debut album “Nine Livez” is all of that pent-up energy released, and it spills out of every track.

Rob Lewis and Tony Stoute split the production duties on this album. Unlike some albums that only have one hot beat that you have to know who did, the tracks here are consistantly crispy throughout. Picking standouts on an album this well executed is no easy task. The snappy drums and bass of “Peel” are set off by a nice horn stab in the chorus with all of the elements showing a near perfect balance. “The Cypha” uses a clever MC Shan sample in construction of the chorus, but wins even more for the hi-hats and pianos that construct Nine’s rapping backdrop. Speaking of piano, the ominous chords of “Everybody Won Heaven (Redrum Remix)” make the original version earlier on the CD seem positively giddy by comparison. Mood makes the man, and the man sounds menacing on this cut – just as he does on the braggadocious “Who U Won Test” where he dismisses half-assed rappers in English and Spanish.

Even these examples scarcely do justice to the impeccable music found throughout this LP – from the Rakim laced “Any Emcee” to the stomping attack of “Da Fundamentalz” the music is as Nine would say “like spandex, mad tight (right right).” And the beats wouldn’t work unless Nine was not such an intriguing rapper. You continually get the feeling he’ll hock up a loogie at any minute, but yet he just keeps on flowing. This gimmick wouldn’t work if Nine’s rhymes weren’t well constructed, but every song here is a manifesto of the kind of hip-hop skills that 9 out of 10 crossover rappers wish they had. Just peep the ill verbals Nine spits on the humerous and imitable “Ahh Shit”:

“I get mad when niggaz try to play me like I’m stupid
I start shootin like a revolution, or Cupid
I don’t miss, infrared type thing goin on
I drop a bomb like Hiroshima with my nina
then move my razor blade like a crossfade on your jawline
Understand, Nine is Optimus Prime
Follow the leader with the speed of, a cheetah
You want a fair one nigga? Put up your dick beater”

Clearly this album was one of the best releases of 1995, if not for the decade of the 90’s as a whole – yet Nine seems to have been completely forgotten by the music industry. It seems the haters won out and “Whutcha Want?” was indeed the flash in the pan they hoped it would be – a passing fad that was quickly forgotten – except by this reviwer, that is. If you’re fishing through a pile of used CD’s at your local pawn shop and see a pair of cat-like eyes staring back at you on a mean grill, consider trading $5 for this album. It’s actually worth a lot more, but most folks will never know unless you take the time to hip them to this true hip-hop gem.