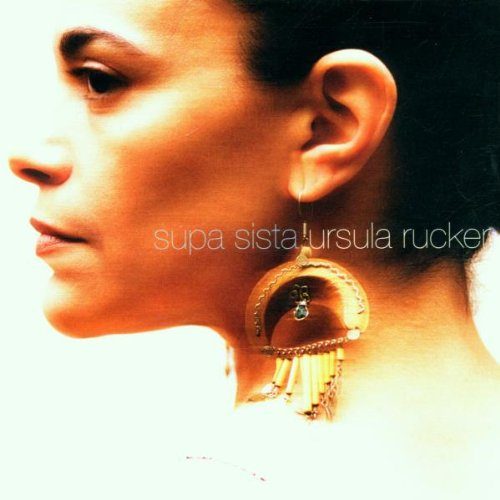 Ursula Rucker is familiar to most hip hop fans as the voice that closes every Roots album with her spoken word pieces. But this Philadelphia-born poet has also worked with everyone from 4Hero to King Britt, making her presence and intelligence known with each song that graces her voice.

It has all built up to the release of her debut album, “Supa Sista”. Without a complete record to her name, most fans have had to buy various albums and singles just to hear where she’ll take them next. This album is a chance for people to hear a more in-depth chapter of her life, or at least the life she lives and the one she chooses when putting pen to paper.

If you’re only exposure to Rucker has been through The Roots, you might be in for a shock if you’re expecting an underground hip hop gem. Her diversity is expressed in the music she chooses to speak over, so the music bounces everywhere from funk to soul to drum & bass. The consistency is in Rucker herself and the stories she chooses to share.

While not a rapper, Rucker has an incredible sense of rhythm within her voice, even when the lines are simply spoken. How she says the words, her delivery, and the words themselves, how they come out one by one as if this was her master plan, is what makes people coming back for more. In “Womansong”, she talks about the slavery of women. She speaks to all men who look at women as people to oppress and nothing more than a piece of ass:

Love gained and love lost is the topic in “7”, which suggests that love between two people is created in seven days. Rucker duets with rapper M.A.D., who talks about how he fell in love and how the emotion had taken him over. When Rucker analyzes each romantic day, she asks “whose world is this? it’s his. do you remember that sweet surrender?”, M.A.D. replies “yeah yeah”, followed by Rucker’s matter-of-fact response “yeah, you better”. With the help of the 4Hero-produced track, one almost expects to hear Digable Planets’ Ladybug come out to share her views on love. It’s that funky.

She attacks the current state of hip hop, and black music in general, in “What???”, where we are introduced to her rapping alter-ego, U-Love. She is disgusted at how the music is today, and gets aggressive:

There was a time when fans looked up to female MC’s, but the ones that hog the spotlight aren’t exactly people to look up to. That also applies to the male MC’s who glamorize anything that is negative and evil, to which Rucker reacts sharply:

Your mishandling of the mic…and music’s power…is played
it’s time for change
so what you think…you up for the challenge?”

The internet has become the latest hip thing to discuss in rap music, but in “Digichant” she wonders what tomorrow’s children will be like if today’s children are surfing the net without knowing how to read and write:

“More than a nation of our children have become violent
start buckwildin’ in quiet town schools
fool parents and neighbors with that nice kid bit
learned to hate on the Aryan website –
www.killallniggasfagskikes@burninhell.com
learned to make a bomb in three easy steps
innocence and adolescence
swept up into digital F3 frenzy
What happened to Chutes and Ladders
and Candyland
So I have one question
Are we gonna utilize it or become it
Are we gonna let it serve us or usurp us”

Her words are bold but never over the top, because a lot of what she is saying may be some of our own personal thoughts. She isn’t afraid to say them, just as she isn’t afraid to talk about her ghetto upbringing (“Philadelphia Child”) or a young girl whose youth is taken away by men who only see her as a personal fucktoy (“Song For Billy”).

The most revealing piece on “Supa Sista” is the hidden track that features just Rucker and the microphone, “I Keep Secrets”. Here, she talks about the things her parents, close friends, and lovers should never know about, the kind of things we hold dear to our hearts but choose to hold in, fearing the reaction it might cause. If anything, the track is a response to our “reality TV” culture where everyone is willing to tell Miss Cleo their deepest thoughts, or to watch Jerry Springer and not knowing how to react when someone reveals something that used to be called sacred. Her voice reveals strength, at the same time vulnerability. Or in this case, a need to hold on to the good times when everything seems to be going bad.

“Supa Sista” is just one of the million or so female voices from Philadelphia. Who Is Ursula Rucker? Words and thoughts volume 1, hopefully as part of a neverending book of creativity, wisdom, and word play.