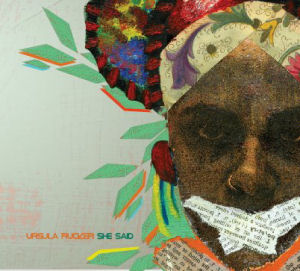 RapReviews readers will probably recognize Ursula Rucker from her spoken word pieces on the Roots first three albums. Her commanding voice and unique delivery were a nice compliment to the Roots’ jazzy hip-hop. She has also released four solo albums. “She Said” is her fifth album.

“She Said” is a combination of spoken word and singing. Rucker takes the idea of rap as street poetry to another level, by being an actual street poet. Here spoken word pieces are similar to rapping, but lack the flow and focus on delivery that is the hallmark of rap. Her lyrics aren’t as standardized and regimented as rap lyrics, because she’s not beholden to a set rhyme scheme or meter. The idiom of poetry allows her more freedom than she would have if she were rapping. Here verses are looser, and she uses words for their power rather for how they rhyme or fit into her flow.

Power is the right word. Rucker’s lyrics often seethe with anger, the kind of pissed-off, afrocentric anti-establishment ranting that seemed to go out of style when Dre’s G funk eclipsed Public Enemy’s rebel without a pause. Rucker is especially concerned with female empowerment and social justice. On “Fuck You,” she offers up a harsh female take on Cee Lo’s song of the same name. Rucker is both angry at her lover and at herself for staying in the relationship:

“Fuck you!
For making me feel an angry orgasm
For making me want to vanish
Run
Fight
Over some dumb shit
Fuck you
Cause it is week’s end and I’m still here”

While her passion is undeniable, she doesn’t always hit the mark. Some of her political screeds are presented with an artlessness and a lack of subtlety and nuance. As a poet, she should be able to do better than drop lines like “the absence of a system of checks and balances in this country is endemic.” On “Feel Me,” a well-intentioned criticism of how technology isolates us and limits actual human contact, she resorts to quoting the Who’s “Tommy” and listing off Apple products. That’s not to say that she doesn’t get angry right as well. On “Ring The Alarm,” for example, she turns Tenor Saw’s song about being the best soundsystem into call of emergency about the state of the world.

There is more power in Rucker’s words when she allows herself to be empathetic with those suffering rather than lashing out at the powers that be. On “Mook,” Rucker rides a mellow reggae riddim, both singing and speaking out about the struggles of the poor against an uncaring system. The song highlights Rucker’s strength in balancing the personal and political, and making the personal political.

Rucker’s true potential is unlocked on “Wanna.” Backed by just a trumpet and an acoustic guitar, Rucker sings and talk-raps about the thrill and fear of entering a new relationship. She demonstrates a vulnerability and strength that reminded me of Lauren Hill. “The Pliable Ones” has a similar mix of spoken word and singing. Rucker’s lyric trade off between political commentary mapped to personal struggles and poetic observations:

It’s lines like this that won me over to “She Said.”

The music on “She Said” was all recorded by a live band, who offer up a mix of R&B, reggae, jazz, hip-hop, and rock. The live band is used to interesting effect, particularly on “Stop Calling Me!,” which is essentially a four-minute jam with Rucker and the band improvising their parts. While a few of the songs veered more towards adult contemporary than I’m comfortable with, for the most part I was feeling the music on this album.

“She Said” is an interesting take on hip-hop from a talented singer, songwriter, and poet. While she’s most famous for her fiery poetry, Ursula Rucker shows her true strengths in the moments of quiet reflection on this disc, and her ability to meld the personal with the political. “She Said” is musically, thematically, and lyrically solid, and recommended to anyone who is looking for more soul and conscience in their hip-hop.