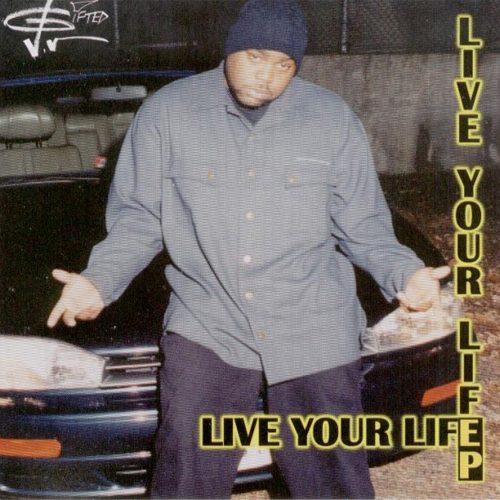 What can one say about J-Gifted? Maybe that I wouldn’t mind hearing more of him on occasion. Three years after sacrificing his own money to produce a low budget music video and a few songs, this DC native signed with Rugged Soul Records and has finally dropped an EP entitled “Live Your Life.” At 31 years young, I can imagine J has seen it all out on the streets, and now he’s sharing it with the world. The thing that I dig about J-Gifted more than anything else is his energy. He raps with heart, which is more than I can say for a lot of other artists.

This album is basically one big story of street life. From hustling to dying, J covers it all. On the title track, he gets some help on the hook from his label mate Amanda Shelton. “Live Your Life” is a realistic story and warning about life on the streets. J Gifted paints a candid picture with sincere lyrics.

“These streets is beasts out here
naw, police don’t police out here
they talking reach out where
but I can’t see
I’m blinded by the blood and the gunsmoke
so I take tokes to ease pressure
but when my high go down I’m even more stressin
they yellin
‘ride or die’ but either way it’s genocide
as long as my cash flow is minimized
criminal thoughts appear as clear as DVD would
and everyday is like tales from the hood…”

Perhaps my favorite tracks on the EP are the Rob A produced “Reach for the Stars,” “Harder I Rock,” and “Dedication to My Mans.” “Reach for the Stars” is a positive and upbeat track with a jazzy feel. Similarly, “Harder I Rock” may take you back a bit to the old school and have you bouncing back and forth. Both have a catchy beat and will keep your head nodding. But lyrically, the sentimental “Dedication to My Mans” won me over. It’s a heartfelt attempt to let his boys know that he cares even though they may not keep in touch. It’s a nice track, with simple yet fairly effective production, blending a simple beat with the sounds of a mellow keyboard melody. Here’s a taste:

“shit ain’t been gravy
yeah I wanted to call
But with nothin to say
no good news at all
To keep it real
shit, I ain’t even call my moms
To keep it realler
she don’t even call me
another issue
But um from the heart I really miss y’all niggas
Remember when the cops used to frisk y’all niggas
but we all grown up now
for the ones who made it
Gotta think wiser
Gotta contemplate it
See it’s fucked up cause I don’t know who dead or alive
Or what misfortunes they done had in they lives…”

If you’re into street anthems, “Ultra Violent” is the one for you. This grimy track features Brooklyn’s Face Nasar and another unknown cat, both of which hold their own pretty well. One drawback to this song, however, is also apparent in the rest of the EP. The music itself is too repetitive and can get a little monotonous at times. You might find it hard to get through an entire song without wishing there were more variety. Also, JG has an unbelievably annoying tendency to make reference to more famous artists and songs. From John Travolta to Lil’ Wayne, if you can think it, he probably mentions it.

J-Gifted may not come with the most intricate and complex lyrics out there, but his simplicity is somewhat refreshing. He comes with a rawness that is nice to hear on occasion. “Live Your Life” may not be in the daily rotation, but if you like tales of street life from a hungry MC, you might want to cop this one.