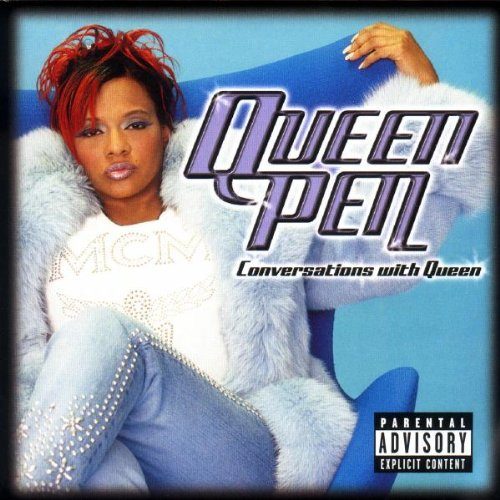 Now here’s a face I didn’t think we’d see grace another album cover in this new millennium. Guess girl already proved me wrong. Queen Pen got her major shot at stardom with her guest appearance on BLACKstreet’s “No Diggity” alongside Dr. Dre back in ’96. I can’t front, she had me open with the few bars she spit: “Please excuse if I come across rude, that’s just me / and that’s how a playette’s got to be / stay kickin’ Game with a capital G / ask the peoples on my block, I’m as real as can be”, etc. She then debuted with the gold-selling “My Melody” on Teddy Riley’s Interscope imprint Lil’ Man Records, which also spawned the platinum single “All My Love”. While Riley gave up his label owner dreams, QP was busy being a mother of three and securing a deal with Motown to put some food on that table. In addition she talked publicly about an abusive relationship, raising awareness among the hip-hop generation.

That’s all good, but it would have been better if these “Conversations With Queen” would actually be decent, in both senses of the word. ‘Beef’ seems to be on everybody’s platter-du-jour these days, but all these rivalries between rappers increasingly look like publicity stunts. First you release a ‘underground joint’ taking stabs at some unnamed rivals (“I Got Cha”), then you start the album off with another warning shot (“Warn U”) that leaves the field open for speculation. Who is she addressing? Like I care. The motto for the first third of “Conversations With Queen” seems to be: I can be a bitch too. An early low point is this line in the opener where she refers to herself as “the best kept secret like a bitch with good brain”. Sadly, this doesn’t describe a smart woman, but – those who regularly listen to rap know what she’s talking about. She remains on the same low level with “Pussy Ain’t For Free”, in its mindlessness a weak contender even in this light weight class. Next up is “I Reps” where to her credit she outshines guests Cam’ron and Prodigy (which is not much of a deal these days). But with bars like “I rep for them chicks givin’ brain in a Range / that ain’t scared to be a freak for the right pay” and “I rep for my Panthers that’s locked away / innocent on death row countin’ down them days” in the same verse I wouldn’t be hard-pressed to say something sarcastic. Well, since I’m in the mood I’ll say something anyway: I wonder, do you actually have to +pay+ DJ Clue now to come scream on your record?

Not all bad is her attempt at recreating the classic Stetsasonic stomper “Sally” in “QP Walks”. She adapts the same rhyme style and brings her vocal stylings to a nice closure: “They say that I’m the rawest / they like how I’m proportioned / ghetto butt with nice thick thighs / and I wouldn’t trade it in for no modelin’ size.” Then finally she puts some of her life experience to music. “Ghetto Divorce” is a carefully written divorce paper filed to her man:

“For too many years I had yo back
and for too many years you gave me slack
Tell me, what did you think, that I was an idiot?
for how many years you thought I’d take yo shit?
I’m out, I’m leavin’ you with the whips and the cribs
in exchange for the kids and my happiness
Ghetto divorce, how real is this?
and oh yeah, tell your side bitch she in like Flynn
I left enough food to last till the weekends
and when it’s all gone, go eat with your friends
since that’s who you cherish more than me
the one who carried every last one of your seeds
the one who did a bid with you when you copped 1 to 3
the one who was on your side when you copped your first ki
Me and you, kid, we was meant to be
who’da think that the streets will make you flip on Queen”

Together with missjones supplying the hook and Cochise providing the beat Queen Pen makes “Ghetto Divorce” work simply by focusing on making the song concept work. After all the tough bluff it’s refreshing to hear some rationalizing like “So therefore I’m leavin’ you with all yo ice / that shit wasn’t worth bein’ alone at night / that shit wasn’t worth worryin’ about if you was alright / So ignorant, you never knew your wrongs from your rights / never understood it was always about the respect / not about me bein’ yo main chick with begets on my neck / not about me bein’ the baddest bitch in the hottest whip / it was about you bein’ a real man to me and yo kids.” Finally Queen Pen is taking up some of that responsability she has – at the same time towards her audience and the artform she chose to express herself in. Continuing on that good note she collaborates with some of the Marley family members on “Revolution”, which would even make dead prez feel at home on this album. The Marleys stay around for a second song, “For You”, featuring Mr. Cheeks of the Lost Boyz. While “For You” is about loyalty in a long-lasting relationship, the following “Baby Daddy” talks about the complete opposite, where the relationship only goes beyond a few nights because it produced a baby. With a simple calculation she tries to come this madness by with numbers: “Now here I am, carryin’ his seed / that makes two for him and a fourth for me”. Here Queen Pen shows that she’s much closer to Lyte and Latifah than Kim and Foxy.

Her performance in the final third makes her lose this game despite scoring some points in the second. Producer D/R Period who I thought would add some roughness to this album comes again (after “Warn U”, “I Reps” and “Baby Daddy”) with a half-assed attempt to be up-to-date with “Cold Cold World” (while QP talks about how she and her crew roll), and as I was somewhat expecting the wack-ass pop song cover somewhere hiding on this album, I’m not surprised that “True” pops up, using the crooning of Chico Debarge and the same sample that landed PM Dawn a big hit with “Set Adrift On Memory Bliss” ages ago. Chop D.I.E.S.E.L. makes me take notice for a few moments with his solid beat for “What Y’all Wanna Hear”, but with Amil as the cut’s guest speaker this one’s bound to fail. Don’t be surprised that the Made Men can’t save this project with their guest appearance on the bonus track “Who’s The”.

Compared to her debut album Queen Pen’s sophomore effort is a true disappointment. It lacks in substance, in tight lyrics, in banging beats and offers a musical rollercoaster ride that is bound to make you throw up sometime. While last time around producer Teddy Riley made sure the package was well-rounded, this time the project has too many fathers or better yet a mother that is not at all sure how to raise her kids, meaning her songs. I’m sure she is the perfect mother for her real kids, but as a single mother in the musical sense she should either get her baby daddies to show some real commitment or leave them for good.