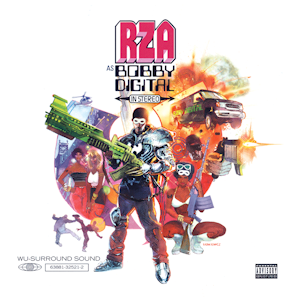 Bobby Bobby Bobby, Digi Digi Digi. The Digital nom de plume Wu-Tang Clan’s RZA chose for his last solo album, “RZA as Bobby Digital (in Stereo)” seemed almost a jab at his critics – I dare you to define my sound and style. Indeed, the tracks he produced for the Wu’s group and solo efforts only hinted at his demented madness. Unleashed he careened from ruggedly hardcore quiet storm to electronic madness to traditionally “killer bee swarm” style Wu-Tang songs.

For reasons this reviewer still fails to understand, this album was widely regarded by even hardcore Wu fans as something of a failure. Perhaps the alter-ego of a cyber-pimpin’ mack was too much for the average rap head; though certainly not at all removed from the 70’s traditions of Dolemite and “The Mack” that infused the sensibility of 80’s rappers from Too $hort to Big Daddy Kane. Perhaps RZA’s own slurred tongue flow proved too much for fans of Ghostface and Meth; though certainly not at all removed from the crispy lisp or thick accents of Kool G. Rap and Slick Rick. Sad to think that even Cappadonna’s “The Pillage” probably outsold this HIGHLY worthy project.

Happily though, RZA’s limited commercial success in his second solo career (the first was as Prince Rakeem) did not cause him to abandon his “Bobby Digital” persona or concept. RZA bided time by playing the background and working on other Wu-Tang projects; and caught many Wu heads by surprise when “Digital Bullet” was announced for a late 2001 release. Some scoffed, some laughed, but the LP arrived in stores all the same – the Cyber-Wu has indeed returned. And except for the lead single “La Rhumba” by True Master and “Domestic Violence Pt. 2” by Tony Touch, RZA produced the whole joint.

RZA brings in the usual assortment of Wu-Tang associates – including a surprising and typically over-the-top performance by Ol’ Dirty on “Black Widow Pt. 2” – but shines just as much or more on his own or with assistance only provided on the hook. On the soulful “Be a Man” for example disparate story elements are swiftly weaved into a common thread:

Other than the Wu, guest appearances are only two: “Righteous Way” features another echoing reggae performance by Junior Reid, and “Domestic Violence Pt. 2” has additional rapping by Goodie Mob’s own Big Gipp. The latter’s track by Tony Touch blends seamlessly into the RZA music with a dirty bottom and mixture of congo style drums. Excellent music is in fact a hallmark of this album – the bee-like hovering synth of “Do U”, the slow and soulful horns of “Throw Your Flag Up” with Black Knights, and the all star Wu-Tang collaboration “Glocko Pop” among others. For those who purchase the “limited edition package” (CD as sold the first week at Best Buy among others) the haunting bonus track “Odyssey” and the strange French rap duet extra “Cousins” are included – the latter a song which ends with no warning at just under three minutes.

There is a nagging feeling though that RZA wasn’t quite as inspired this time. The off-beat tracks like “Must Be Bobby” and “Bong Bong” are even further out than RZA has been before – and although they don’t fail they do test the listener’s comprehension of a song’s elements. Also-ran Wu members like Beretta 9 and Jamie Sommers have the same effect – their appearances don’t ruin the songs; they just don’t enhance them much. Wu fans who listen to “Build Strong” with Tekitha will also wonder whatever became of Blue Raspberry. RZA still carries the track though, as he does so many others, with his mathematics:

“Confused but yet wise, my problems surround me
A lot of things upset me, as my soul rejects me
Enemy of self; physically enslaved
by the luxuries of this world – so I behave
like a man inside the grave, whose life is lost
I want the promised gold, but can’t afford the cost
Or could I? I know, the prescribed laws
Any effect is a result of the cause..”

This album presents a quandary for the Wu fan – it’s not mediocre but it hints at an untapped potential which RZA actually seemed more in tune with on “Bobby Digital in Stereo.” Those who did not appreciate the comic book pimpology mixed with street science or RZA’s sonically slurred sword swinging the first time will find nothing to change their minds. Those who dig it already will feel certain cuts like “Sickness” and the demented “Fools” to be trademark Wu bombs. Whether the album will leave a lasting impact or not is ultimately up to how many people who didn’t buy the first installment take a chance on the second; but like Rush Hour 2 it at least has a chance to gross higher even if parts of the plot just aren’t as good.