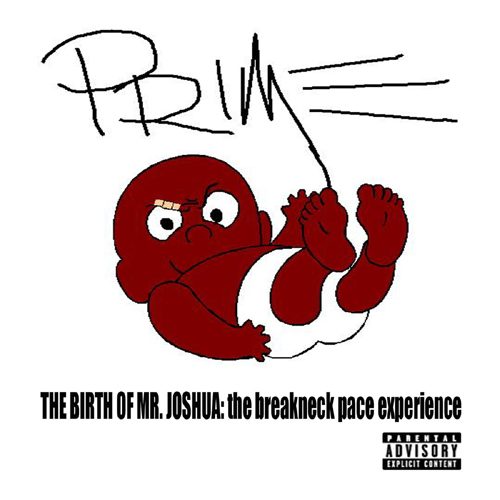 Prime :: The Birth of Mr. Joshua: the breakneck pace experience

Prime’s name could indicate many things. It could say that he comes first, but he’s better known as a producer, not an MC. It could indicate that he’s an indivisible artist, but he’s actually worked with a variety of MC’s in his hometown of Columbus, Ohio. So what is the REAL story behind Prime?

That’s where “The Birth of Mr. Joshua” comes into play. While this is not Prime’s first hip-hop gig, this “Birth” actually gives Prime his first introduction on a national scale. Prime is taking advantage of the opportunity with the jazzy and melodic “Rewing (Joshua’s Song)” – a song with enough buzz behind it for J. Rawls to feature it on his upcoming compilation album “Bringin’ it Home Vol. 1.”

Prime is certainly not a spotlight hog though. Despite his name he continually plays the background to let local Columbus rappers shine. For the most part, they do – SCAMM! & Mondo wreck the mic on “Cir’Camm’Stances”, Profane catches ill vibes with his gruff flow on “Speaking of Me”, and Akil busts over the very Pete Rock-esque horns of “Worldwide.” Each of these tracks would be a standout single for their respective artists, but presented together they serve to showcase why some call Prime “The Dope Producer.”

The variety of styles served up on his album is truly remarkable. Prime goes from a lush backdrop on the Bone-style flow of Mista Kayos’ song “NDeep” to the bastard child of DJ Premier on the Tystix & Curt Guinn cut “Basic Elements” – a song whose snappy beat and scratched hook guarantee a headnod response. Prime and his favorite rappers may be hella local in Ohio, but these aren’t rookies or slouches. All the people involved in “Mr. Joshua” show skills, but Prime’s beats steal the show. Even when you hear the beat from Fat Joe’s “The Shit is Real” remix on the song “Remember…?” you won’t be mad because it breaks down to a tight snare’n’hat loop and scratched in Tribe Called Quest simple. Even Prime’s updated cover of LL Cool J on “Kanday” is right on the money; thanks to an updated sound which also gives homage to “Big Poppa” by Notorious B.I.G. and well-executed raps by Taleeb & Ron E.

You may have already had Cleveland and the ‘Natti on your list, but now Columbus has something more to rep than Tash from Tha Liks. A burgeoning underground scene has blossomed; so put Prime first on your list of artists to check for from Columbus. “The Birth of Mr. Joshua” truly is a “breakneck pace experience.”