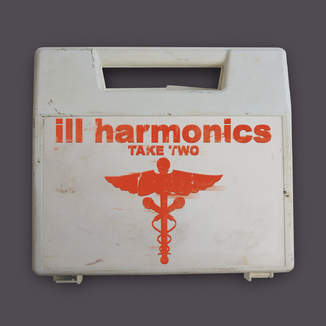 The introduction to this review is already available on this site, in Jayson Young’s recently published review of “Tunnel Vision” by The Tunnel Rats. He apparently ran into a crew that doesn’t care much about lacking mainstream appeal but confidently focuses on its own strengths. Their labelmates ill harmonics are right on their heels. The duo of play-dough and blake knight are the proverbial breath of fresh air that hip-hop needs more than ever. Sharing the mic as well as their religious beliefs they have what other rappers lack: fun.

ill harmonics are decidedly more serious than Ugly Duckling, since they are down with the Lord, but they display the same playful vibe, without just being some happy fools shouting all day long how glad they are to be saved. In fact, on their sophomore album ill harmonics seem to give more props to hip-hop than to anybody else, their love with the artform runs that deep. If this were ‘gospel rap’, there’d be a big chance it would come across overzealous and rap would end up as a mere means to spread the Word. But it isn’t. Somewhere on this record blake knight says: “The emancipation of our minds to create / caused the record crate to become my bait.” Now whether he wanted to say that the record crate had HIM hooked or that he as a producer – and a very talented one, at that! – uses his beatmatching skills as bait to get listeners reeled in towards Christ, is really not that important. Because the operative sentence is ’emancipation of our minds to create’. They don’t just regurgitate what they might have heard in church, their minds have emancipated towards creation.

This could spark an argument about how far the Creator wants us to go in regards to us being creators ourselves. Does it include cloning? Thankfully, ill harmonicsdon’t take it there. They keep it simple, but not stupid. But they do get into arguments, for instance when their will to create hip-hop is being challenged by fellow Christians. “Mr. Chris T. Ian” speaks of the difficulties of being a religious rapper with candid lines like “Mr. Christian, living his life far from perfect / Mr. Christian, he took the grace but don’t deserve it”, but it also addresses those who say rap is too worldly to serve God:

Indeed ill harmonics have songs about girls. And don’t tell me ‘girls’ are somehow not included in God’s plan, because otherwise he wouldn’t have created Eve – and I’m not talking about the rapper Eve! “Gypsy Kind” is about a woman who just can’t be made to stay. Again play-dough comes nice with the verbals:

“Gettin’ her digits the first goal
call her up just to see what’s in her soul
takin’ a chance to romance and go dance
a couple rounds on the floor, then she’s mine for sure
while I score cool points and catch her on the flip-flop
diggin’ on some hip-hop, plus hit the trip shop
for some gear that I’m dipped in, equipped in
rhythmical walk, then impress her with my ill rap talk
I got jargon and slang, but pardon, your name
wouldn’t happen to be Destiny
cause it seems you got the recipe
to get the best of me”

But the song that does it for me is “Bowtie Jerks”. Not since Raheem’s “Born Again Christian” has there been a cuter church romance told in a rap song. They too take it back to the days when their parents dressed them up to go to church, where getting noticed by a certain girl was as important as getting noticed by Jesus:

“She’s just
passin’ me by
I’m askin’ Jesus
please just
answer me why
follow the Most High
straighten up my bowtie
now I’m lookin’ so fly
so I’m catchin’ her eye..”

For “Bowtie Jerks” blake knight dug up a bumpy breakbeat that would make DJ Shadow make proud. But he doesn’t stop there as he sprinkles the track with some delicate jazzy sparkles. Painting a soundscape in earthy colors, he manages to construct tracks that are both interesting and funny to listen to. “Take Two” packs just enough bump to be hip-hop and just enough live instrumentation to expand beyond hip-hop. On the vocal side, the two rappers don’t sound too nerdy or wordy while fulfilling their “MC ministry” (blake). Displaying an array of organic sounds that range from Latin melodies to funk grooves, subtle singing to fresh raps, the ill harmonics are definitely deserving of their name.

The ill harmonics being so different and all might have to do with them being white and Christian and all, but in reality that’s just background information. First and foremost they’re expressing their enthusiasm for (hip-hop) music, both explicitly and between the lines. They got a cut dedicated to their hometown (“San Jose”), one examining their love for music (“Must Be Crazy”), one that advocates being adventurous (“Backside of the Sun”), one that makes hip-hop finally truly look like a holy ritual (“Hi-Fidelity”). From the introductory “Take Two (Call Me in the Morning)” to the live rendition of “The Crowd Is Standing”, “Take Two” is substance AND style in one appealing package. Like they say in “Destiny”, they’ve been called by hip-hop and God at the same time. Whatever your position may be, the ill harmonics won’t let you argue with this: “I figure if God is using me / why should I run from the call of the yes-yes-y’all?”