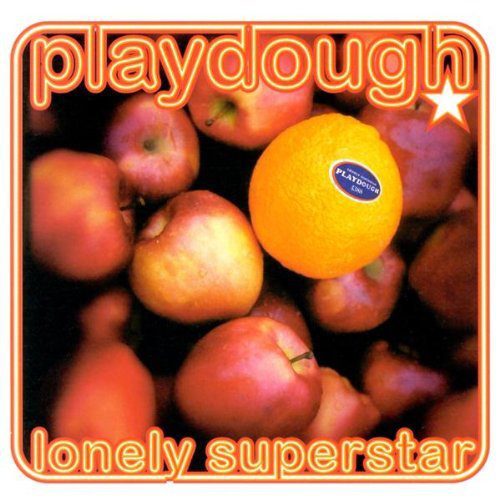 Less than a year after the Ill Harmonics’ refreshing “Take Two” album, group member Playdough returns with his first solo offering entitled “Lonely Superstar”. Bound together by quality production coming courtesy of Playdough’s producer alias Harry Krum, DJ Skillspinz, Beat Rabbi and Freddie Bruno, we find 15 tracks (and some music interludes) whose main reason to exist seems to be to come together on this album. Which is something rarely encountered on hip-hop albums nowadays, where rap songs are tailored for whatever individual purpose they have to serve.

While on the album’s unusual cover, Playdough sees himself as an orange in a pile of apples, he’s made sure that no such mix-up happens in his own basket of freshly picked fruit. However, as a publication that tries to never lose sight of the big picture, RapReviews.com ever so often does what you’re not supposed to do: comparing apples to oranges. Luckily for Playdough, getting compared to other – dare I say more secular – hip-hop styles is not something he has to fear. He sports an animated flow that I imagine would easily surpass many a more thick-tongued MC. His voice has a clear, colorful timbre that, while occasionally irritating, still makes him a highly individual rapper. And despite his jumpy, joyous brand of delivery, he is actually quite a serious character, even beyond the spiritual matters the Christian MC inevitably brings forward.

Like anyone who cares about this music, he worries whenever a wack MC grips a mic, and so a great deal of this album is spent on the subject of rap. “I’ve known many a man doing wrong in a song,” he says in “Seeds of Abraham”, where he could be talking about dubious content just as much as about wack rapping. To shut them down, Playdough, like his extended Uprok Records fam, comes with tight jams that tell of the experience of rocking shows. Meeting the Uprok standard, “Lonely Superstar” is a bundle of nutritious mid- to uptempo tracks with careful instrumentation consisting of fat basslines, delicate drums, and loads of rhythmic guitar chords. With a profile that is equally funky and folksy, the music featured on this album should be able to satisfy anyone open to the effects of headnod-inducing rhythms. But don’t tell Playdough he reminds you of others, because he sees himself strictly in a league of his own: “Breakin’ traditions obviously grounds for heresy / comparin’ me to anything they can from Wyclef to Everlast / they must be uncomfortable with the fact I’m in a class of my own.”

While some cuts, due to their sometimes enigmatic nature, indeed make him look rather lonely (“Verbal Tea”, “Lonely Superstar”), others are conceptually convincing from the jump. “5¢ Needleheads” discusses the fate of the starving artist, or in this case, the starving Christian rapper:

“My mic-check bounced, a freestyle ain’t accepted
A Christian MC feelin’ neglected, hectic
Hell, even my cell disconnected
but that’s the price of rockin’ for Christ”

But don’t overlook his passion for rockin’ period. Testament to this passion is “Mr. Mike R. Fone” (those familiar with “Take Two” will recognize the resemblance to “Mr. Chris T. Ian”), where he speaks from the perspective of a microphone. Seeing as how well DJ Skillspinz’ track matches a title like “Shadow Dance” (driven by Screamin’ Jay Hawkins’ ‘voodoo jive’ of “I Put a Spell on You”), “Mr. Mike R. Fone” seems oddly estranged from its subject.

Much better tuned is “Simple 1”, where Playdough praises the spirituality that reveals itself in simplicity, rapping +and+ singing over a dense, atmospheric slow tempo track. He scores extra points when in a hidden interlude that follows the song, he laments the demise of his old Ford Escort. There’s an even doper intermission at the end of “1/4 Inchin'”, where he eloquently describes the building of a hip-hop track as a family reunion. A late highlight comes in the form of “Palm Sunday” which compares the rise and fall of a music star to what happened to Jesus on Palm Sunday: The same people who cheered for him turned later into a mob demanding that he be crucified. This is how Playdough sees his 15 minutes of fame:

“It’s Palm Sunday, ridin’ a beat, at my feet
they’re throwin’ loose leaves, they want me to freak
cause this week my rhyme’s hot, 15 minutes is what I’m told
till I drop to the cold, watch it all unfold
like Palm Sunday”

While Playdough’s partner in rhyme in Ill Harmonics, Blake Knight, never steps to the mic, he’s well present, mixing the majority of the tracks. To make up for the absence, Playdough has invited several guests, among them Visionary LMNO, Tunnel Rat Jurny Big, Freddie Bruno from DeepSpace 5, Mars iLL’s Manchild, and J-Beits and Joey The Jerk of L.A. Symphony. If any fault can be found in “Lonely Superstar”, it will most likely be in relation to the Ill Harmonics. Since one plus one equals two, two minus one inevitably falls back to one. Compared to “Take Two”, “Lonely Superstar” seems slightly too self-centered and sonically unbalanced. Right from the top (“You Will Listen”), Playdough tries to ensure vocal diversity with singing, vocal samples and distortion, but ultimately “Lonely Superstar” is characterized by his unvaried flow and the many guitar licks. Yet while this album may be musically less accessible than “Take Two”, it truly lives up to the promise of a ‘solo album’.