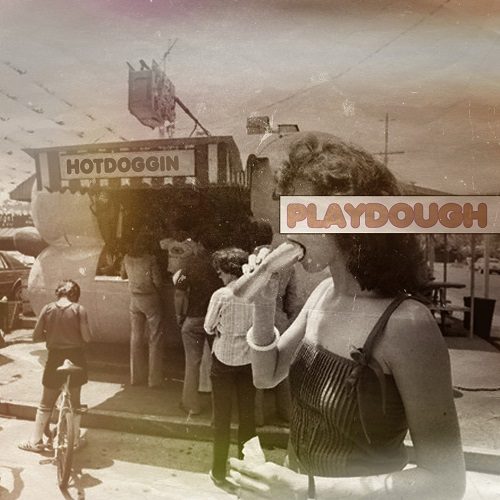 First and foremost congratulations to the Dallas Mavericks on winning their first ever NBA Championship on June 12th, winning a hard fought series with the Miami Heat 4 games to 2. Second of all congratulations to Dallas, Texas rapper Playdough on a rap career spanning over ten years, an incredible accomplishment in his field of endeavor as well, especially given so many rappers fizzle out in a year or two before even scoring a hit locally let alone nationally. Playdough has gotten a lot further than most of his peers, dating all the way back to his 2003 release “Lonely Superstar” on Uprok Records. It’s actually telling that the website for Uprok no longer exists and the label is all but in name completely inactive, while Playdough has gone on two have two globally distributed albums and even release an exclusive EP in Australia. Well done sir – a job well done.

“Hotdoggin” is another step in the journey for Playdough, a chance to re-establish the faith his fans have shown in him, and possibly to win a few new converts to his style in the process. The packaging and promotion for the album suggests either a street food vendor or one of those ubiquitous food trucks seen all over most major metropolitan cities these days (not to mention a dozen different shows on Food Network and the Travel Channel). The sixteen songs are split into two halves, with the first eight tracks being offered as “meal deals” and the rest as “Ã  la carte” (actually misspelled on the back cover, but let’s let that slide). Oddly the pricing on the menu doesn’t reflect the content, as the 48 second opener “Nunya” is one of the mid-to-upper tier priced offerings at $5.99. I can also understand the impetus to charge more for a celebrity named offering but $19.99 for “Elizabeth Shue” seems high for an under 3 minute song. Conversely the album’s longest track “1 Day” is only 99 cents! Perhaps it’s better to just ignore the menu altogether and focus on the music.

“I got a reason for the, rhyme I’m squeezin outta
And I don’t know a single person but I sees a lotta
friends and neighbors, these pens and papers
They’re doin lots of freedom fryin french potatoes
So hug the bartenders and go tip the waiters
Don’t miss the piss jockeys, oil dipped in faders
And fists for the dissed record hissin haters
Concealed with a kiss ’til they gets the vapors
And I’ma put my hand out, pullin for the comin up
Friend-of-mes and enemies I’m learnin love’ll sum it up
So touch somebody that you ain’t never met yet
Let that comfort zone fulfill a death threat
Cause the best yet to come and you can bet that
We gon’ let that kick drum get the cassette wet”

While Playdough might hail from Dallas, the flow seen above on “Rhymer Reason” has a more West coast, Californian vibe to it with nary a trace of a Southern accent. This makes me think the press release his people sent out was ever-so-slightly off base, because while it says D-Town is where he “hangs his hat” he’s no cowboy and definitely won’t be confused for Dorrough any time soon. To me he must be a Texas transplant but the one-sheet doesn’t say and Matt Jost doesn’t reference where he’s from in our last Playdough review, although the guest stars on “Lonely Superstar” were certainly left coasties like LMNO (Visionaries) and Joey the Jerk (L.A. Symphony). The same is true on “Hotdoggin” for cameos, with guest starts like Gift of Gab on the song “Franks & Beans”:

Playdough: “Ride on it, bet on it
You can put your life on it, dead on it
Some dough, some needin that bread money
That cream, that dollar dollar bill
Money to burn, more than I earn, but so what?
And money can’t buy love, but still it got yo’ buck
So get your dollar’s worth, go one for the money
two for the show and prove three for the twenty”

Gift of Gab: “Back in the days of what it used to be a thousand
Now from inflation, planning’s re-routed
It’s gettin mo’ violent, it’s gettin mo’ rowdy
Resources for the note, gotta even buy water
It’s all about the dollar, I holla doggone it
They got so much power, they put God on it
And what do we trust now to get us through the moments? Some people say faith but you gotta have money”

Harry Krum is involved as a producer or co-producer for most of the album, and in the case of “Franks & Beans” he works with For Beats Sake to create an enjoyable backdrop for these like-minded artists. He drops a fat and heavy funk for the humorous and enjoyable “So What” featuring Freddie Bruno, digs deep into the crates of scratchy samples for the crackling “Follow It,” and guitar rocks his way through riffs on “1 Day.” When other people step in the quality of the presentation doesn’t decrease – Beat Rabbi lends a hand on the aforementioned “Rhymer Reason,” Freddie Bruno takes over as producer on the minimalistic “The Business,” and DJ Bombay rocks a classic throwback piano boom bap for the title track of “Hotdoggin.” It’s so fat you’ll want to throw some it on a bun with some mustard and onions.

That takes us briefly back to the album’s presentation and look for the closing paragraph of the review. While some might see the fairly attractive woman appearing to deep throat a hot dog bun and all on the cover and think “phallic,” there’s no explicit sticker on the album nor is it tagged as such on the digital download. Over time you actually start to notice that Playdough doesn’t really curse on his tracks; furthermore the songs do not really lack in quality for the lack of profanity. What Playdough is essentially offering on “Hotdoggin” is a kosher frank stripped down to the hip-hop elements without any extra preservatives or artificial ingredients. You may even start to notice an underlying spiritual theme on closer inspection, not the kind that smacks you over the head as him being a Christian rapper with an agenda, but more of a man who is comfortable in his faith and doesn’t feel the need to exclude it from his conversations. It’s so subtle you could actually miss it entirely, but it’s not an unwelcome taste if you do notice the garlic in the mix. Playdough’s got the right combination of ingredients on “Hotdoggin” to satisfy your palate.